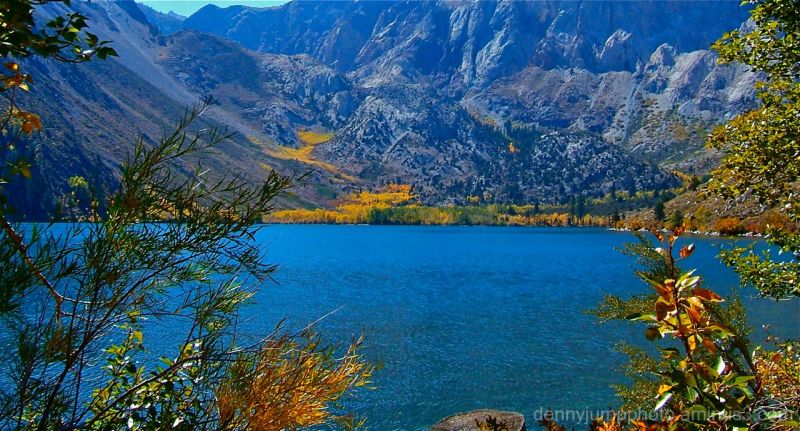 Convict Lake is located along the eastern side of the Sierra Nevada Mountains between Bishop and Mammoth.
The lake was named after an incident in 1871, where a group of convicts escaped from prison in Carson City, Nevada (about 80 miles north.norhteast of here). A posse, led by Sheriff Robert Morrison, encountered the convicts near the head of what is now Convict Creek. Morrison was killed in the encounter, and Mount Morrison was named after him. The slopes of Mount Morrison are visible above and just to the right of the lake. The Lake is easily accessible from US highway 395, making it an easy jaunt for tourists. Locals and those who know also like to come here for scenes such as this. This was captured in early October, 2006, some time ago, but I thought it would be nice to put in here since fall seems to be making an early appearance in many areas around the US. This view is looking basically westward.

Growling at the West Coast here but... wonderful picture!!! Look at all of them colors! Nice!!!!!

@Julie: Hi Julie - Thank you - we caught things on that trip just right for sure!

Beautiful framing of this image. I saw it in the thumbnail and already the blue hit my eye. This is gorgeous! I love the deep blue of the water and the light yellow tones speckled over the foreground and the distance.

@Bettina: That's what the water looked like too! No joke. I almost fell to my knees when we first saw it. Thanks Bettina!

Denny this is a beautiful picture. The clear blue lake...the fire gold trees...the DoF...and then the story. A good picture needs a story too. Such a pretty place to be called Convict Lake! It might be an “old” picture, but it’s beauty is timeless.

@Cruz: Until I read the story, all I could think about was the Humphrey Bogart movie "High Sierra" which was filmed further south in the Lone Pine area I believe.

@Nigel: Hi Nigel - Thank yo very much. We were fortunate on that trip for sure.

Absolutely gorgeous! The colors are fantastic and I like how you framed the lake.

@Bill Brown: Thanks Bill - It was a fun trip and I loved this lake!

WOW! This is beautiful! The natural framing is lovely and the blue is simply gorgeous! I love the colours... especially the autumn ones ;) Very well done!

@✿ Anina ✿: Hi Anina - thank you so much. Have a great weekend!

I love your framing and the fantastic autumn colors... This must be a fantastic place for photographers ! Thank you for the great information on this location also, it's always a very interesting addition.
Have a wonderful day Denny :)

@Tamara: It is indeed a good spot - lots of tourists but we got there on a fortuante time I guess - it wasn't too crowded. Thank you Tamara!

OK Denny, now you are making me miss another one of my favorite places-the Eastern Sierra! I actually have not been to Convict Lake, although I did drive from LA to Lee Vining a couple of times. Nice framing here, with the leaves in the foreground, and the water is a pretty blue. I'm planning on going to the Mono Basin next June to bird and hike, so don't feel sorry for me stuck here in flat Indiana.

@Julie Brown: This is just down 395 from Lee Vining and Mammoth Julie - you could make it easily :-) It really is a pretty spot for sure. Hope you are feeling better :-)

Those colors seem put here with a paint brush - luminous, Denny, and such a positive feel...

wow - the blue in this photo is amazing - I need a vacation, and I need to go somewhere just like this - thanks so much for sharing with us. Absolutely beautiful image!!

@Scene by Sharon Photography: I think the blue here is a wonderful contrast to the green in the lakes of the Canadian and US Rockies - both are just exquisite.

beautiful image with the most beautiful color of water :)) Love it !

@MARIANA: Hi Mariana - Thank you very much - it was indeed a gorgeous day for sure!

Superb view, well captured by you...
Is it just off the camera and did you process it..
Either way, it is simply wonderful...

@Sunder: It's primarily off the camera - most people don't believe that but it is tru. I adjusted the shadows and contrasts

Some glorious colours in here, especially the russets and golds leading down to the lake, blues are possibly a bit strong though.

Great framing and bright colours. Looks almost unreal, but I know how that happens in fall sometimes with the golds and the deep blue sky.

Gorgeous! I love that intense blue water and the stream of yellow aspen leaves flowing down to the edge of the water.

Stunning composition! I love the colors Is this fall colors coming on? If it is , it is beautiful ,and love the reflection and POV! I wish I was there! You are lucky to hike this!!! WOW!