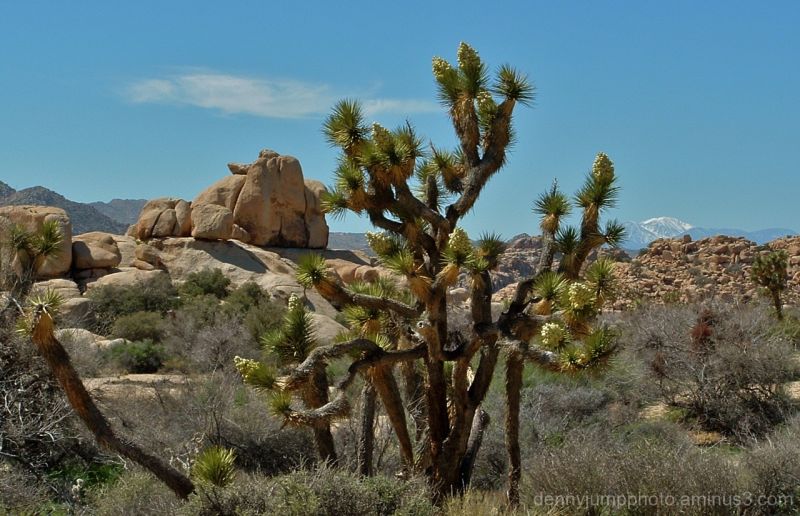 Joshua Tree National Park is located in southeastern California. The Park lies 140 miles east of Los Angeles, 175 miles northeast of San Diego, and 215 miles southwest of Las Vegas.Declared a U.S. National Park in 1994, it had previously been a U.S. National Monument since 1936. It is named for the Joshua tree (Yucca brevifolia) forests that are native to the park. The Park covers a land area of 789,745 acres. Joshua Tree National Park rests upon two different California Deserts, The Mojave Desert which is a higher elevation (typically above, 3000 ft) and the Colorado Desert which rests generally below 3,000 ft elevation.

Joshua Trees are found in the higher Mojave Desert elevations. The lower Colorado Desert encompasses the eastern part of the park and features Creosote bush scrub; Ocotillo, desert Saltbush and mixed scrub including Yucca and Cholla cactus (Cylindropuntia bigelovii). However these plants, such as the Creosote bush and Yucca may also be found in the higher elevations.

Here we see, in my opinion, the four essential elements of this wonderful Park. - These are the things that make this park so popular: First, the Joshua Tree itself; Second, the amazing gelogy and rock formations as you see all around; Third, the various other vegetation such as the magnificent Cholla Cactus which we will see later in this series; and the fourth element is the wonderful scenery - the gorgeous views. Here we look to the West and we see the snow capped mountaind of the San Bernardinos and San Jacintos which lie between the park and the giant urban metropolis Los Angeles area. Out here, one can forget all about metropolis and become energized and alone with the spirit of Mother Earth. When we lived in San Diego for 20 years, Joshua Tree National Park and the Ancient Bristlecone Pines (I showed you a few months ago) shared the most revered place in our hearts of being a restorer of our spirit and energy.

We will talk more about all of these things during this series but I wanted to give you a general overview, since many of you may not have ever been to this Park before.

I have also attached some map lins for you if you wish to explore. I will try to provide you with as much information as possible. I have many images to show you so lets get started.

Super composition - I like the glimpse of the snow capped mountain in the distance.

@Nigel: Hi Nigel -Thank you very much - yes this image, or rather, a view such as this one that is not always seen but it is one of my favorites!

Denny, you have captured Joshua Tree at it’s best. And, the fact that you can see a snow capped mountain from the desert is amazing. I’ve not been here in several years, yet it is a wintertime favorite of ours. It will be interesting to watch this series and see if I can figure out where you are/were. You caught the colors spot on!

@Cruz: Hi Cruz -Thank you so much..no major worries - I Am going to TRY and referenece where the images are for the viewers...I'll explain more on tomorrow's post -Thanks for your wonderful comment!

what an awesome place - I am so grateful you are doing this series, I am certain I will never get there myself, so it is wonderful to get to travel through someone else's lens. I am looking forward to seeing more!

(I will be away until 15 October, I will check back in on your images upon my return)

@Scene by Sharon Photography: OK Sharon - Thank you and take care..I'll save 'em for ya :-)

Great image . Would love to have this cactus here, in my place ;)

@Mariana Maodush: Hi Mariana-Thank you so very much! In my series i will explain more about the typical sizes of things but this Joshua Tree that you see here - you would need a room of about, I would say, 12 metres square by about 40 Metres high...my guess....i.e. this baby is bigger than it looks!!

Wonderful image Denny ! This is so beautiful... perfect clarity and colors, thanks for the very interesting explanation you gave us. I really like these kind of "reportages" I'm looking forward to this very promising series :) Have a fantastic day :)

@Tamara: Hi Tamara! Thank you very much - This is one of my favorite views that Barbara and I took some several years ago...so why not start with this one eh? I will explain more things and give more details about stuff on tomorrow,s blog - have a great week!

I mispoke to Mariana - the height requirement for this Joshua tree is about 30-40 feet which is, what, about 10-12 metres??

A stunning capture to kick off what promises to be a fantastic series! Wel done Denny! ;-)

@Eric Cousineau: Thanks my friend..I hope everyone enjoys.

This is a wonderful image, Denny. I like how you featured the Joshua Tree in the foreground, the rocks in the mid-ground, and the mountains in the background. Thank you for providing the info about the park. I totally agree with your comments regarding the spiritual renewal that being here provides. That is exactly how I feel, and why I seek out these landscapes. I would love to see this place, but for now I will have to live vicariously through your upcoming images!

@Julie Brown: Hi Julie - Thank you so much. Wehave almost 230 Joshua Tree NP shots...all were taken before I had my dslr but these are from the same Fuji that I took the Bodie Ghost Town shots with so most are fairly "good". The one think honestly JUST noticed in this one is that the depth does not seem to be as much "there" as I had hoped...I only say this to explain that the hight of that big clump of rocks back to the left is probably about 40-50 fweet...stuff like that. But I still love this shot!! Stay tuned...I will try to be like the Staples Singers and "I'll Take You Back" ;-)

Looks like a wonderful place. I've only been to California once when I was a kid, and we spent far too much time in silly places like Disneyland ;) I really want to go back and visit some of these wonderful national parks shown in your images and others'. I know I will enjoy this series!

@Andrea: Thank You Andrea - California has lots of cars and lots of people but it still has lots of open space and tons of beautiful scenery from ocean shores to virgin forests to the highest mountain peaks and on to the most energizing and finally the very fragile deserts. I will expand on this point during the series. Thanks again ;-)

This park is high on my list to see. What time of year is this that the trees are blooming? A wonderful opening image for the series!

@Steve Rice: Hi Steve - thanks - I shuld actually post this as a comment - perhaps I will - but the best time to see the yuccas and Joshua Trees in bloom is Late late March to mid- late april for the Joshuas and mid april on even into May for the Yuccas...also the wildflowers start popping, depending on the varied elevation of thuis magnificent park, in mid-march thru mid-april USUALLY..but you have to take me with you!!

HI folks - I shuld mention that this Joshua Tree (a member of the Lilly family, believe it or not) is blooming here in early April...

@john4jack: Hi Jack - Thank you - we love it too and miss it terribly! And the trees are endangered like no other.

Love to see till the mountains in distance far away, a great sunny light bathes the place & this light is so clear it's a present, thanks for sharing, Denny (raining in Paris ;))

This is a lovely image, Denny. Yes, Joshua Tree is an incredibly special and spiritual place, great for renewal. You have done a wonderful job of capturing the essence of this park!

@Barbara: Hi Barbara - Than k you very much! I will keep trying for good ones!!

Nice intro. Bring 'em on! I was there as a kid, and look forward to the show.

@B. Thomas: Fasten your seat belt and get some popcorn ;-)

Beautifully composed Denny with a great DoF to reveal the mountains in good detail. I love your elements as well.

@Steven: Hi Steven - Thank you very much. I really appreciate your comment! This is a very special place!

Wonderfully composed shot...Love the mountains in the background..esp. the snow capped ones..

Beautiful composition and image! Doesn't that big rock in the back look like a big bear or something - Really and really pretty!

@Becky: Hi Becky - Thank you very much. I love that rock - I always think that it loks like a little lamb stuffed animal!

Hi Den, Well, the first thing I noticed when I looked at your photo was the snow-capped peaks in the hazy distance. What is interesting to me is that many other Aminus3 friends saw the same thing. I love this shot. Makes me want to take a visit to "Two-Niner" Palms.
Can't wait to see the next shot.

Love to you. David and I enjoy viewing your photos.

@peggy n: Hi Peggy! - Oops I guess I missed your comment last night. I know what you mean about the mountains - everyone likes that "contrast" between snow cappped moountains and desert...that's one of the things that make California Deserts so very special in my opinion. You don't see it all the time but when yu do you go "whoah, Thats awesome!". I have some images of "2- Niner" and the street, trees, and murals but they were really bad photos, seriously, I was thinlking about putting one in and discussing USMC Base etc but not sure if it will work..stay tuned I may think of something. I plan to roll this series through Saturday or Sunday - thanks Peggy - Love DJ :-)

What a beautiful shot! Now that is exactly where I would love to live!!!!!

@Julie: Well you can't live on the National PArk unless you are a coyote or other animal but just off the park property there are some spaces available I think ;-) We have often thought about doing that but make sure your A/C is working ;-)

Postcard perfect Denny! This is another area I'm very familiar with having spent over five years in the high desert during my Air Force days. I have many Joshua tree images BD (before digital) to prove it. Here is one I posted last year: http://billbrownphotography.aminus3.com/portfolio/421.html