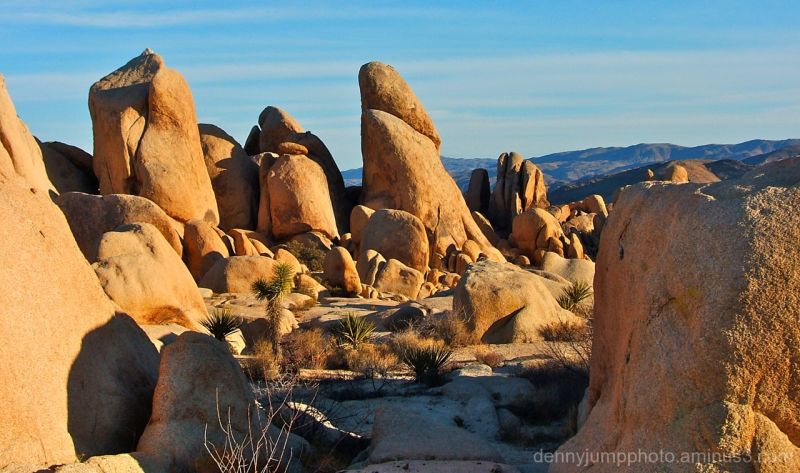 HI Everyone - Before we start for today I should clarifty that all of the photos in this series were taken in March of 2007. Thus the blooms seen on the Joshua Tree (Yucca Brevifolia) as well as the other Yucca plants...it also explains why some of the other vegetation is green.

These fantastic rock formations are just a few examples of what can be seen in the Park. Their formation has taken place over a hundred million years. The rock is mostly Monzogranite, (a type of granite). Down through the ages, large vertical and horizontal cracks began to develop in the monzogranite allowing the forces of wind and water to further erode and shape the rock into various forms. However, some of the granite retained it's "square" shape (we will see examples of this tomorrow). Other rocks, such as those seen here, continued to be shaped more and more.

The surface of much of the granite in the park is rough and coarse. Many of the more gently-sloping rocks are easy enough to "scramble" wearing a pair of tennis shoes. Other more verticle blocks and shapes have developed a much smoother surface resulting from direct impact from wind and rain. These features are very popular with rock climbers who come from all around the world to practice, enjoy, and challenge their skills.

Many times, people come to see the Joshua Trees but they often leave with a new-found love of the rocks, as well.

Wow... this is really impressive ! Look at these shapes, it's like a lunar landscape ! A very beautiful image Denny, also the explanation is really interesting. Fantastic and exciting series. Have a wonderful day :)

@Tamara: HI Tamara - Thank you so much. A person could literally spend weeks wandering around this huge park and discovering all of the many and varied shapes....it is simply am,azing, fun and and beautiful! I hope you are having a great day, good friend!

The light on this shot is wondrous! Thanks for clearing up the time frame as I was wondering about all the greenery in “Golden CA”...not in October. These pictures are making me want to go back...maybe when we snowbird away from northern CA in January or February...

@Cruz: Hi Cruz yah, sorry I threw you off...I tend to sometimes speak in the wrong tense....you know us historians are always living in the past so we gte mixed up. Barbara and I both really want to get back there...this danger that the plant sface is no joke. Take care sir! Snow in the Sierras already eh?!

Was it shot in late afternoon, Denny ? The light is splendid that caresses them !

A beautiful place in a very nice light

@Marie LC: Mi Marie and thank you so much. I Truly love your Argentine shot for today - just awesome!

HI AGAIN EVERYONE - SOME HAVE ALREADY BEEN ASKING SO I WILL ADD HERE THAT THIS IMAGE WAS TAKEN VERY LATE IN THE AFTERNOON ON A CRISP EARLY MARCH DAY IN 2007. THANKS

Wonderful light and warm tones in these so different shaped rocks !

When I first clicked on this image I thought I was back in the Alabama Hills above Lone Pine! You are right in that these rock formations are incredible and can capture one's imagination for hours on end. Would love to spend more time there (so many locations and so little time)! Hope you are doing well Denny.

@Don Smith: Hi Don -Thank you so much. This place and "Bristlecone" are places of spiritual renewal and importance to Barbara and me. Thank you so very much - I know you are really busy right now. Go Sharks (and Flyers ;-)

Outstanding composition in this shot Denny! The lighting is seductive and appealing! Well done! ;-)

@Eric Cousineau: Hey Eric - Thank you so much! Now while I am thinking I need to tap into the little fella's post for today right??

The light and shadow really add depth and interest to these rocks. I love interesting rocks too.

@Andrea: Hi Andrea - Thank you very much...I like your photo today as well ;-)

@Larry Elkins: Hey Larry - Thank you sir! I really like your image today as well!!

@Nigel: Well Thank you sir - yours is as well, today!!

A brilliant image of these lovely shapes in the warm light. A really special photo, Denny!

@Steve Rice: Hi Steve - Thank you, I really appreciate those really nice remarks! All the Best!

Each of these monoliths could easily be hauled to a city and
called sculpture. The time involved for nature to do all of
this sculpture is long by human standards but short in the
grand cosmic scale. A beautiful place for you to find for us
to enjoy, Denny.

@Phil D. Morris: Thank you Phil - that is a really wonderful comment - I wish you all the best in return!

What a fun place to hike around. I love the light in this shot. These rocks rock!

@B. Thomas: This is a VERY fun place to hike around just not in late May through mid- sept.

Beautiful composition, Denny! Very interesting formations! What a great place to visit! I love the light in this too! Nice!

@Wild Mustang Photography: Hi Pam and Thank you. This is a very special place...like the disappearing Glaciers, these trees may soon be no more.

Lost track of you for awhile there, Denny. I like the light and the fill in the shadows. Well done.

@Formerly known as MontereyJohn: Hi John - It's ok - same on my end. I see you out there and I have tapped in a bit to your work so I know you are good...it seems like there is not enough time in the day anymore to do what I want and need to do...Thank you very much for checking in. Wishing you all the best!

SO SO SO beautiful! Wow - just gorgeous - the light and shapes and feeling here - really special. Perfect image.

@Becky: Hi Becky Thank you..yes there are scenes to be enjoyed like this all over the park...only t hours max from your house...plan to go out there next March and you will not be disappointed (or April)

What a beautiful shot Denny! The lighting really was at a perfect time!