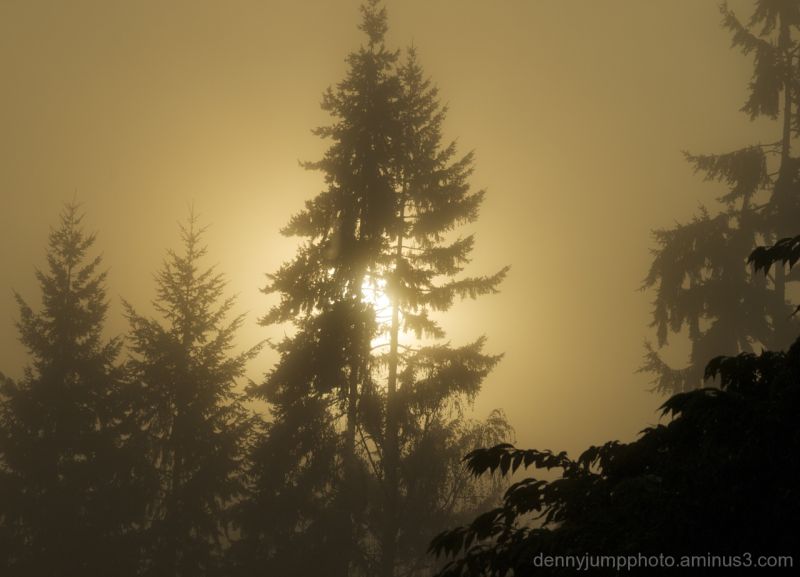 Here is the progression of the scene we saw two days ago, panned just a bit to the left and a bit later in the morning. And again, believe it or not, this is a color image. Here. the fog has just begun to dissipate and the sun starts to do it's job. Later the day became mostly sunny until late afternoon when clouds returned, but not so much fog.

The entire Pacific Northwest and British Columbia are filled with daily scenes that are just phenomenal. Although it can be completely grey during certain times of the year, usually, the sun will come in and out of the clouds at the edges of the day. If one is prepared, some awesome images can be captured almost on a daily basis. For photography enthusiasts, it becomes a paradise filled with "photo opportunities!" I highly recommend a visit to the Northwest and/or British Columbia if you can possibly make it.

Great work on contrast here and that most amazing fog inspired light to collect
another beautiful image.

@P. Morris: HI Phil...Thank you so much! I was really amazed at the sight that morning, and I still cannot believe the silvery (in the former image) and "antique-ish" (in this one) hues that we see in the two shots! And they are seen here as they were that morning..THAT is what just blew me away and really compelled me to fire the shutter for sure!;-)

Such a beautiful scene... I like the difference between the two shots. The fog is slowly disappearing and the sun becomes stronger ! Very nice work Denny. Have a wonderful day :)

@Tamara: Hi Tamara...I am loving your images as well - they are awesome! I thank you so much for your comment here - Have a wonderful weekend! Denny

fantastic image - such beautiful depth you have captured
isn't it amazing how a scene can change so dramatically within moments ... I would love to see this same spot photographic over an entire day, I think it would be interesting to see how different it looks depending on the time of day.
Love it!

@Scene by Sharon Photography: Hi Sharon...thank you so much for the wonderful comment. To be honetst, you may become a bit disappointed because all of this is right smack in the middle of a neighborhood but all the houses etc are "hidden" by this cloak of fog...it's an older and very nice neighborhood on a slope, and it is pretty, but still a neighborhood :-) I still enjoy going there because normally we have time to walk down to the lake or stroll thru the neaby woods, unfortunately none of that on this trip! Have a great day!!

@Larry Elkins: Hi Larry - Thank you so much! Have a great weekend sir!

Like something out of a dream Denny! It seems to have a life of it's own. Well seen and captured! ;-)

@Eric Cousineau: Thank you very much Eric ;-) Have a great weekend!

@MARIANA: Thanks Mariana -Yes we all seem to be in a Van Morrison mood lately with the Mystic - have a great weekend

@ursulakatariina: Hi And thank you so very much for your kind comment. I very much like your images and had to chuckle at the pumpkin brains - very original ;-)

Very nice atmosphere! Fog is a wonderful thing to photograph!

@Tracy: Hi Tracy - Thank you so much! To me, the element of fog is perhaps the most "loaded" element of all...fog draws out all kinds of emotions and it conjures up all sorts of thoughts. It enhances and serves as a stage setter for the enire scene. This tree in the sunlight on a clear day is a beautiful subject...this tree on a foggy day with or without the sun makes us think of that night in Casablanca.....I better stop before they carry me away...Thanks Tracy ;-) Go Giants!!

Gorgeous with that diffuse golden light.

Your capture here provides a sense of aura with the fog and sunlight; yet ominous at the same time as if there is an approaching storm.

oh this is one of my favorites! dreamy and gorgeous

This is lovely! I love the soft tones and light here. Such a romantic image.