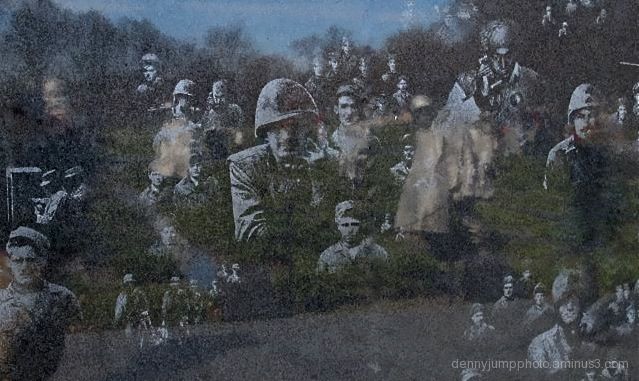 I captured this image in March, 2008 while visiting Washington D.C. This is one of the reflection murals at the Korean War Memorial. The Memorial is a gripping and dramatic display... a stirring tribute to the 6.8 million men and women who served during the Korean War period which ranged from June 27,1950 to January 31, 1955.

Today, Thursday November 11, 2010, is Veteran's Day in the US and Remembrance Day in Canada...But with this post, I am saluting Veterans everywhere around the free world for the job they do for their own countries and, by extension, for the world.

Right now, service men and women are deployed in the far corners of the globe doing an often difficult and thankless job. Sadly, some may not return home, but all will be veterans. I am a veteran of the US Vietnam conflict. I have many friends who are veterans of Vietnam and other wars. We don't all agree on everything, but we do agree that all veterans, deserve respect and gratitude for the job that they have done for their countries. So, to all of my fellow veterans everywhere, again I say "Thank you" and God Bless you all!

Nice tribute to veterans of war

How thoughtful :)
Salute and Thanks ! To my Father too who went through two wars and lost his life in this last civil war !

@MARIANA: Mariana Thank you and I especially thank yoour father - I am very sorry for your loss! This posting thatb I did today is especially for Veterans like him!! My sincerest regards!

Thanks for posting this Denny - we need to all stop and give thanks to our service men and women. Your narrative says it all. Have a good day my friend!

@Don Smith: Hi Don - Thank you so much. You have always been so kind. I thank you on behalf of all Veterans, for being so wonderful and gracious!

@Formerly Known as MontereyJohn: Hey John Thank you so much for your additional words!!! Safe Travel sir!

this is a beautiful remembrance, Denny - thank you so much for posting it!!

@Scene by Sharon Photography: Hi Sharon - Thanks to you as well, for your kind remarks - have a good day ;-)

Very touching photo, Den. Every person who fights in a war for justice and liberty and maybe gives of his/her life to keep us all free has my undying respect and always will. Thanks, little brother, for saying it so well. Love you very much.
Peg

@Larry Elkins: Hi Larry -Thank you so much - I loved your image today;-)

@john4jack: Hi Jack - Thank you very much! Your image today was deLIGHTful!!

A superb tribute Denny which says so much of this very special day.

a beautiful and touching tribute and image - fantastic!

@Becky: Hi Becky - Thank you very much - all the best!

Great image and good thoughts. Thank you, to you, Denny, for your contribution and service. It's an important day. My thoughts are will all the men and women abroad.

@Bettina: Thanks to you as well my friend - glad you are kickin'

An outstanding tribute to all veterans in picture and words! Thank you Denny!

@Bill Brown: Hi Bill - I love yours today - it is awesome ..But thank you for your kind remarks here, for sure!!

A beautiful tribute to all of the men and women who have served their country so that freedom can prevail! Well done Denny! ;-)

Fitting tribute to all the veterans with this great picture...

Beautiful capture for such an appropriate day. Well done!

Interesting compilation, Denny. Thoughtful, pensive. Today, I spent time thinking of both my mom and dad who both served in WWII. It is a day for reflection. Thanks for your share, today.

Very good tribute to all these man who lost their lives to save their country. I like how you've presented it Denny !

A beautiful image, and an absolutely wonderful tribute! Thank you to all of our selfless Veterans.

And thanks to you, Denny!

veterans of the free world