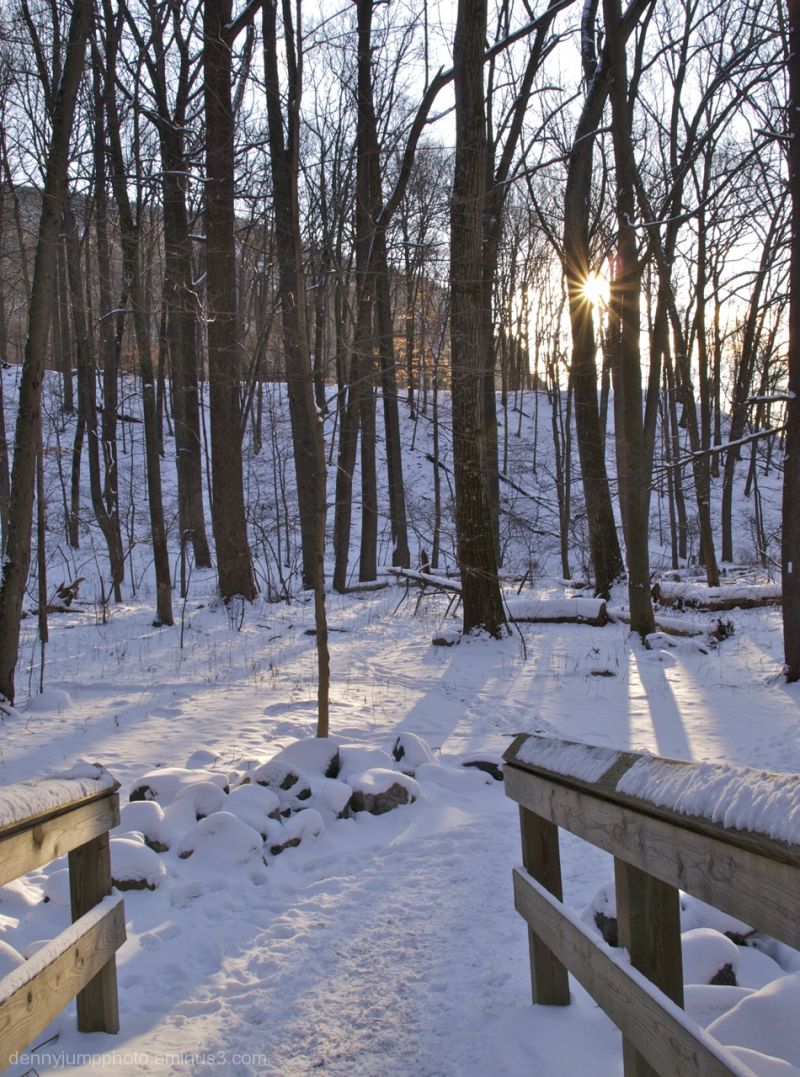 Over the next 4 or 5 posts, I will feature a series of images that I captured 2 weeks ago on a solo "snow hike" on a short portion of the Appalachian Trail (also known, simply, as "The A.T.") Don't be confused by the word "Delaware... We are standing in New Jersey here. The "Delaware Water Gap National Recreation Area" (N.R.A.)runs along that portion of the Delaware River which includes Northwestern New Jersey and Northeastern Pennsylvania. The part of the trail that we will see skirts along a small tributary named Dunnfield Creek. From this point, we will turn around and move in a northerly direction. In this view, we are less than 200 meters north of Interstate 80 (to the right and out of the picture) which roars, rumbles, squawks, and groans on it's noisy 3,000 mile path from New York City to San Francisco. However, once a person starts walking up this particular trail, it does not take very long at all to completely lose any sense of the famous (or infamous) highway's existence. One quickly becomes lost in the beauty of the surroundings and hears nothing other than the sound of the nearby creek. Thousands of visitors enjoy this portion of the trail - in all seasons - exactly for the reasons I explained above! Park your car, get out, start walking and, in less than 5 minutes, you hear nothing other than the sounds of Mother Earth.

In this view, we are looking in a southeasterly direction toward the rising sun. The ridge on the upper left through the trees is "Mt Tamany." Named after the Lenni Lenape chief Tamanend, Mt Tamany is a towering, ear splitting, nose bleeding, breathtaking elevation of..... 1,526 feet!!

In the next few days, as we move up the trail , most of the images you will see will feature exclusively water, ice, and snow. A few images will include trees. I will explain why this is as we go along our little journey. For now, however, just put on your parka, light a fire and start a cup of hot tea.

Wow, that is beautiful light and I like that sunburst! Awesome work on this with the soft light and mix of shadows!

@Scott F. Schilling: Hi Scott - Thank you so much. One cool thing about this part of the country is that the "Golden Hours: last pretty much all day during the winter...the sun is always at an angle...but I took this shot about 0730 and the sun had not been up very long so the roses and pinks were still around...Thank yuo so much for your comment!!

This is really beautiful Denny! I like the rails in the foreground inviting you to walk into this wonderful wooded area, as many have done judging by the tracks in the snow. The sunburst just tops it off.

@Bill Brown: Hi Bill - Thanks very much! It was a beautiful morning but really cold...!

@Scene by Sharon Photography: Hi Sharon - Thank you! The snow wasn't nearly deep enough for snowshoes or skis....you would have killed yourself!! The trail and surrounding terrain, even on the "best" of days, is a hiker's nightmare with rocks...but the snow does really help if you are just wearing boots..it diminishes the mid- sized rocks and all you have to contend with are the larger rocks and small boulders. Hikers term the Pennsylvania and Western New Jersey portions of the "Appalachian Trail" as the worst and most "Boot Killing" portions of the entire thousand mile trail!!

a most beautiful and calming prospect! can't wait to go on the walk with you!

@Franz: Hi Franz...there will be several "water only" scenes..I will explain - thanks very much!

Very sweet light captured in the trees. Looks like a peaceful moment!

@Bettina: Thanks Bettina! It was peaceful but rather chilly...

superb sunburst. i envy you your hike

The dawn of a lovely day. Our days are fairly gray. Looks cold though.

I like this for the snow and soulful feeling it gives me and for the light. Looking forward to you hike.

@LauraS: Hi Laura - Thank you so much. I loved your imae today!

@Sunder: Hi Sunder! Thank you so much!

Great capture of the sunburst as it casts long shadows of the trees!

@Steven: Hey Steven - Thanks very much!

You captured the mood very nicely, Denny. I do hope you reveal more details about your hike. A few years ago I hiked from Springer Mountain, Georgia (the southern terminus of the AT) for three days at the end of March with a friend who was embarking on a solo journey for 7 months (she did finish the entire AT).

@Julie Brown: Hi Julie - Thank you. I will try to elaborate as much as I can...I have been on this portion of the trail several times in various seasons, but it seems like each time we (or I in this case) go, time is short . Quite honestly, my shots for this series, consist primarily of water and ice..I have a few trail shots I will show and some tree / light images...I had intended to hike further up the trail but simply ran out of time because I was having so much fun getting the stream and the ice...sound familiar?? I promise to display more images of this creek and trail later on in various seasons...

Really beautiful light and the wonderful path up those stairs/ramp to meet
the photographer !~

Beautiful sun burst there Denny! We usually hike the PA side of the trail. We will have to check out the NJ side this year coming! I bet it was cold out there! Brrr. Wonderful shot and looking forward to the others!