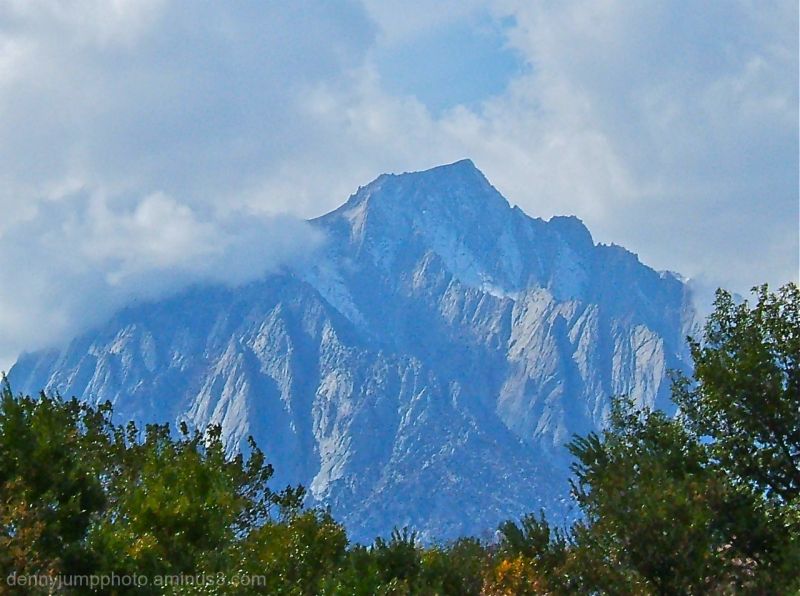 Mt Whitney as seen from Lone Pine, CA. I have had this image in my archives since 2007 but I have always liked it. Not that it is that great, technically, but this particular view of this gorgeous mountain, along with the the clouds and light have always appealed to me. Mt whitney is the highest peak in the contiguous United States at 14,505 (4421 Meters) . It used to be the highest peak in the United States until Alaska, with it's Mt McKinley (elevation, 20,320 ft / 6194 Meters) joined the union. Mt Whitney rests at the southern end of the beautiful Sierra Nevada Mountains which run nort and south along California's eastern portion.

fabulous capture of a great mountain. the day i was on top, we needed to haul out our down jackets; it was cold, overcast and windy

@john4jack: It was probably like that on this day here in this scene. I took this in early October of 2006 ( I incorrectly said 2007 in the text) and a storm had just come through the day before!! Thanks Jack -I just sent you a note in reply to your advice...thank you VERY much Jack!! God BLess!

Now this is special. What hues, what colours. Denny, nice info too.

It's easy to see why it appeals to you.

this is an amazing image - so majestic!

Nice clouds on the peak. I have only seen this mountain from a distance while driving on 395. Someday I hope to get a closer look.

@Julie Brown: I pulled quite a crop to convey this one...but it is an awesome mountain even from the parking lot of the city perk in Lone Pine! Thanks Julie

Personally, I think this shot is magnificent, Denny. That is one awesome peak, isn't it? California is lucky to have her in the Sierra's. Well done.

@LauraS: It really is an awesome peak, I agree. Has just a wonderful shape to it. Thanks Laura!!

you could call this the "blue giant", denny! a wonderful "portrait" of this majestic mountain!

This is the most spectacular image, Denny, one that you can continue to
go back and marvel at the spectacular blue mountains in their misty
glory, wisps of marvelous clouds like steam falling off the mountain.

From your image, you really get a sense of how this mountain dominates the landscape. Well done.

Denny, this really is a super shot! The colors, clouds, moutain and trees are just awesome together!

Oh, Denny - this is spectacular. I've driven down Hyw. 395 in winter and know this landscape. All the more reason that I am impressed. Good eye!

I can't find anything wrong with the image Denny. It's a gorgeous capture of this wonderful mountian.

Magnificent!! I love the interaction of foreground and subject, and the way the clouds play along.