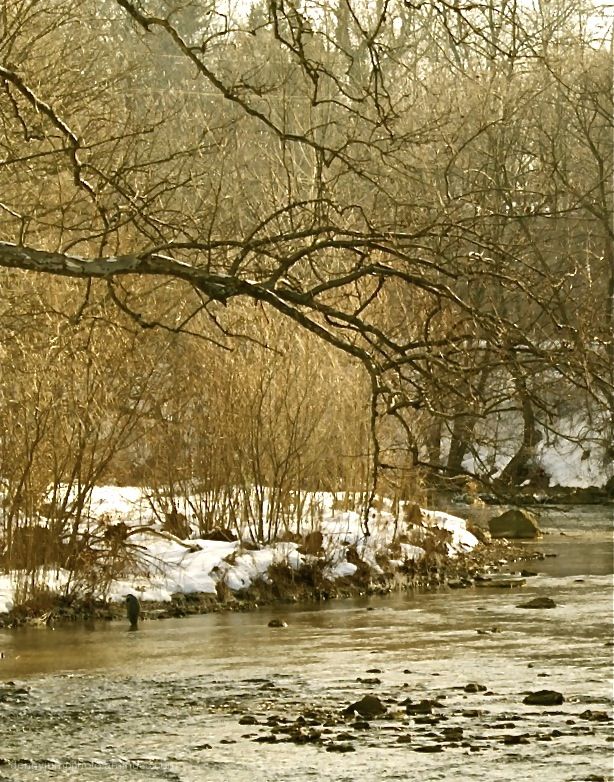 "Bird" under the Branches

The great Jazz Saxophonist, Charlie Parker was also known as "Yardbird" or just "Bird." Nobody but nobody played like Bird. He branched out to stratospheric heights in his expression and artistry. The bird in this image also branches out and "plays" like no other.... He plays with your mind! He is elusive, flighty, and worst of all, he is smug. He has his back turned to us, but just as well, we can enjoy the entire chilly scene here..I have a feeling we will not have very many more chilly scenes to show. It's still quite cool here in Pennsylvania, but Mother Nature is on the move. The variety of weather common to March and April is fast approaching. So while we can, let's enjoy "Bird" on the Rocks!.....ps - He's actually not ON the rocks, he's over there on the left, but, shhh, don't disturb him!

I like the warm tones. Nice catch getting a bird in the shot.

This is beautiful Denny! The warm tones really work.

Ah, the bird is essential to this image. And there is wonderful light as well.

Not a bird on a wire either! Denny, like you I'm a Bird fan. This is a great shot in every way. Nice start to Sunday looking at your photo.

The tones are really beautiful in this peaceful landscape... very well done Denny ! Have a lovely sunday :)

Superb warm tones you get here to contrast with the cold weather. Good to see Bird has found a spot to chill out!

@Philip Jump: Hey Brother - Thank you so much...I tweaked the antique just a bit but the color was pretty mcuh like we see here...'we thank you fer yer support"

The lighting is perfect in this shot Denny! Soft and warm despite the snow on the ground! Well done! ;-)

that's one cool title and story to go with it, denny! i sensed from looking at the picture that it lacked certain "winter" qualities - so let's hope spring will come soon!

Aside from your bird in the stream - a nice and gentle image.

This is beyond coincidental, I have been listening to Charlie Parker a lot of late, specifically Star Eyes Charlie Parker Verve 1950 (Studio version). I have always thought another Charlie (Mingus) summed up Bird's talent with title of his composition 'Gunslinging Bird: If Bird were a gunslinger there would be a lot of dead imitators' (actual title).

@Ralph Jones: Hi Ralph - Thank you so very much! Mingus was absolutely right. And that is a quintessential Mingus quote, isn't it? A very close friend of mine played a bit part in the movie "Bird" directed by CLint Eastwood and starring Forrest Whittaker....and I think Whittaker did such a great job in that movie. "Star Eyes" was truly a stratosphere piece whenever he played it...for me, although was always a bit aghast at "strings in Jazz" (OMG) my mind lately has been going back to his work in the song "Laura"...I was aware that he was probably doing that for money but his soul and spirit and inner beauty STILL soars in that song....but really his work I think with Gillespie was probably the tops for me. The guy was just a saint and a spirit sent here by the heavens- I am sure of it!

There he is! I didn't see him at all today, not even a glimpse! Nice shot, he is a sneaky one!!

Boy, do you have a creative way of thinking, Denny. What is the name of this bird that has turned it back to you?

@Julie Brown: It's the drug residue from the sixties!

Its a fitting image for this time of year. We are just getting a taste of spring. Denny have a great week....

@James Guillory Photography: HI James - Thank you - Your Hockey image is fantastic...I had to weigh in on the debate...but what a shot (the camera shot) and what a punch! Where can I see some of your other hocky images? I would love to see them!!

Bird was one of those special musicians who comes along maybe once in a lifetime. The way he phrased and improvised changed the way people heard music. Thank you Charlie Parker for your legacy, I hope you find the peace in the afterlife that seemed to evade you on your time here on earth.

I'm so sorry to hear you and Barbara haven't yet fully recovered from the flue... Try to keep warm as much as possible, spring is near :) You don't have to thank me for my visits Denny, It's always a real pleasure and I know you're not always able to reply (I have the same problem, so don't worry at all). I always much appreciate your visits too, so thank you for your kindness and take care :)

@Tamara: Thanks Tamara...we ate all the cupcakes, can I come back over and get some of these cafe delights??

What an incredible amount of texture seen in the branches of this composition. The snow actually stands out nicely here. And I love the sepia treatment.

@Steven: Hi Steven - Thank you so much. A compliment regarding texture and detail from you is a treasured commodity! Thank you VERY much!

fantastic - love the warmth - the colors, detail and the little bird in the big world - just so so beautiful!

bird under the branches