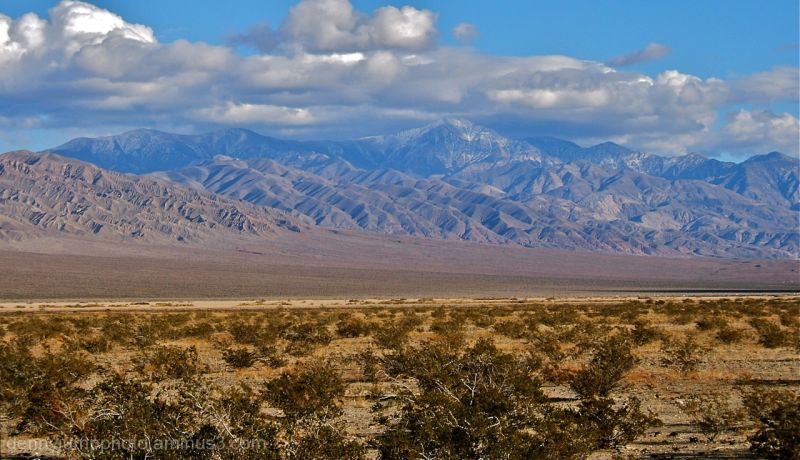 Here, we are still in the western portion of the park on US Highway 190. We are travelling eastward and will cross over a pass called Towne Pass which is at elevation 4,950 feet. From there we will "drop" down about 4,000 feet into the middle portion of the Park at Stovepipe Wells.

Death Valley National Park is located in Eastern California...towards the Nevada border...Within the boundaries of the Park lies a spot, Badwater, that has the distinction of being at the Lowest elevation in North America: 282 feet (86.0 m) BELOW sea level (I will show you this in a few days). Interestingly, the lowest elevation point at Badwater is only 86 miles from Mt Whitney (in the Sierra Nevada Mountain range), which is 14,505 feet and is the second highest peak in the US. So, only 86 miles separates the lowest point in North America from the second highest point in the US.

Death Valley also holds the record for being the driest location in North America with an average rainfall total of 1.5 inches per year. In fact, there have been two years - 1929 and 1953 - that have had absolutely NO RAIN recorded for the ENTIRE YEAR! Now THAT is dry!

Finally, Death Valley has the distinction of being the hottest location in the Western Hemisphere with a temperature of 134 degrees F (56.7 Celsius) recorded on July 10, 1913.

In this view, we are looking to the southeast towards Telescope Peak which rests at 11,049 feet. To the east of (and downslope from) Telescope peak, lies the Lowest point in North America at Badwater. For now, we will continue eastward over the Panamint Mountains and into the main part of the park.

If you notice the broad sloping mass of land from left to right coming down from the mountains, this is known as an Alluvial fan (aka Alluvial Plain) I will explain more about alluvial fans in a few days.

Tomorrow we travel over Towne Pass and Friday, it's Stovepipe Wells and the sand dunes.

I hope this works - here is a link for a pdf map of Death Valley National Park
www.nps.gov/deva/planyourvisit/upload/DEVAmap1a.pdf

Could you please tell them to bring these sites over to the East Coast for us to photograph now? haha! Great picture, I love the mountains out there!!!!

@Julie: If I could I sure as heck would ;-) Thanks Julie - Your tulip shot today is a winner!! Great shot!

This is an amazing place. Great shot.

Such a beautiful landscape, the mountains and clouds are spectacular and the
landscape has beautiful colors all around.

@Phil David Morris: Hi Phil! Thank you very much..and thanks for all the wonderful comments and support you give Sharon and all of us really...all the best!

Ahhh... Death Valley ! One of the places in the world that makes me dream ! A very beautiful landscape photo here Denny ! Thanks for sharing. Have a wonderful day :)

@Tamara: Hi Tamara - Thank you very much..."ahhh" is what I say viewing your images as well! Have a great evening!

another "ah" photo - what a beautiful shot - nature at its most beautiful.

@Scene by Sharon Photography: Thanks Sharon...you need a few "Ah's" I am sure ;-) All the best!

@BBM: Hi and thank you so much for your kind comment - I really liked your pounding wave shot today - dramatic!!

I love these layers in the landscape - this time with superb contours and ridges on the hills. Great shot!

@Stephen: Hi Stephen - Thank you so much! I did not really notice the rolling ridges quite so much when I shot but looking again here I do like them as well
;-) Thanks sir!

@Eric Cousineau: Thank you so much, Eric...really nice of you to say. I do appreciate it. The desert is a beautiful place to those who open their minds!

I like how this shot is in thirds. Very nice.

beautifully structured, with stunning colours and shadows! this is how i remember it, too!

@Franz: That is really nice to hear, Franz! Thank you so much. This series will not be so much about unique shots - I will be the first to admit that...But what I try to do in these desert series is just simply give an idea to those whom have not see, an idea of what it is like...I will leave the artistic attempts for later ;-)..Thanks so very much sir!

Each layer from earth to sky and in-between sings Mother Nature's splendor - your light too is divine. Very peaceful, Denny, thanks*

@k@: Hi Karine! What a wonderful thing to say -Thank you so much...have a wonderful evening!

Beautiful composition with great use of sunlight. The sunlight helps create the shadows giving the alluvial fans some depth and a 3-D look to them. I love the arid look of the foreground.

@Nigel: Hi Nigel _Thank you so much!

Magnificent scenery and photograph. I like the bands of dominant colors.

@Francisco Romero: Hi Francisco - Thank you very much for your kind comment ;-)

DVNP certainly is popular with photographers these days. personally, if i'm going to travel, i'll head to swutah

@john4jack: You got a good point there judge! swutah is awesome..can't say I disagree with your opinion at all ;-)

I could look at this all day. Just looking at all of that space and natural beauty - to think that there we are all caught up in these cities - excellent shot.

Visualaccent from somewhere in the, United States

Denny
Since you are there already try to hike on Telescope Peak from the west side (Panamint Valley, Ballarat, Panamint City). It is rough, 8 hours hike with unique view to the east of the Death Valley. You won't find many people there accept perhaps few adventures "desert rats". Be well prepare - it is pretty cold up there and it is not a joke!

@Visualaccent: HI and Thank you - Actually this is a "virtual" trip...we were last there in 2006 and that is when these shots are from ;-) We did not make the Telescope hike but wanted to..just had way too much and not enough time...I also missed but really wanted to see the beehive shaped kilns up that way towards Telescope...we are planning to get these both accomplished on our return trip but that will not be for a few years yet...Thanks very much for the points though, I do appreciate it ;-)

Great view-this is a place to see on my bucket list! Denny, is this a virtual trip, or are you in Death Valley right now?

@Julie Brown: This is a virtual trip..the actual one was a few years ago (;-) IOf you go, don't do it in Junes, July, August, Septemeber, or even the first part of October...unless you like searing heat 7/24.

Being from CA, I happen to know about this area, and as you share the geographical and historical data, I must add that you are doing a great job describing this Death Valley terrain. Thanks for sharing this with the world, Denny. It is very unique, very special and beautiful to visit (except on July 10, 1913).

@sawsengee: Hi and thank you so very much for visiting my blog and leaving your comment - I tru;y appreciate that! All the Best ;-)