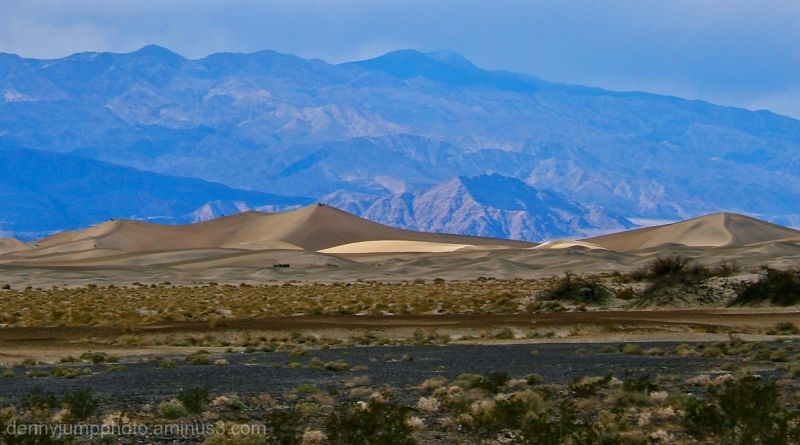 We were actually fortunate to visit the park in late February when clouds were prevalent much of the time. The moving clouds allowed for the sun to shine or not to shine at varying points in the day. As we were leaving this location, I noticed that the sun was shining only on one specific dune, much like a lead actor on stage being under the primary spotllight! As quickly as I could, I composed and shot this scene to retain for future memories. The aura of this view was amazing to me. The mysticism and energy were strong. My spirit was so moved I did not want to leave, but soon the clouds entirely blocked out the sun and the "spotlight" turned off....and I became hungry for a sandwich! So off we went to our next stop. I do hope that you enjoy this scene as much as we did.

Our next stop, as we get closer to Badwater, will be the Borax works at Harmony.

A lovely spotlight, indeed. A great shot, Denny. The borax works is cool.

What did you do here? The dune just POPS. Very cool.

@Monterey John: Hi John - I just hit the shutter...the sun waas shining on JUST that one dune..it was a true Ansel Adams momend, i just happened to be there ;-)

@Richard: Hi Richard - thank you so much...I hope you have a wonderful Sunday!

I can totally understand why you wouldn't want to leave this spot - I am finding the same just looking at the photo. Amazing beauty - breathtakingly beautiful!!

@Scene by Sharon Photography: Thank you Sharon...a broad view but we enjoyed it!

Denny, A different perspective. You see a ton of images from the dunes, not many were you took this image from. Very nice...

@James Guillory Photography: Hey James - Thanks very much...to be honest, I think this was simply shot from somewhwere near the road because we were loading up to go and I turned for a last look and say this light on the dune and just about lost it , right there...I know, shots FROM the dunes,I hate to say it, but they are a multiple ...nevertheless when I go back I will want to do some ;-)

@Phil David Morris: Landing spot for sure - I was mindblown when I turned and saw this - really glad that I caoought it - it did not last long! Thanks Phil ;-)

I always enjoy the feeling when one ray, or one pool of light illuminates a small part of a landscape. Sometimes it is a challenge to capture it before the clouds take control again.
I am enjoying this view you have shared with us.

@Curly: Hi Curly. Isn't that the truth (what you said)? These moments are rare and fleeting and we should consider ourselves VERY fortunate when they occur. I also feel lucky to be able to observe and enjoy - and learn from - your work...Thanks for all the kind and constructive comments sir!

@DowsherVision: Hi and thank you so much! ;-)

Wonderful contrast between the clear foreground and the hazy mountains in the background! There is a great sense of anticipation here Denny! Well done! ;-)

@Eric Cousineau: Hi Eric - Thanks for your very neat point! I appreciate that.

I can appreciate your spiritual experience with the center-stage dune catching your attention. It is magnificent, isn't it, and you will always be able to look at this and remember that special feeling. Good for you.

I love this - beautifully seen! The subtle light is just perfect.

@Stephen Phillips: Thank you Stephen...we were enjoying the sun and clouds...for sure!

@john4jack: Thanks Jack - I sure like your tree today!

@Mike: Thanks very much Mike - I am hoping that i am not boring people to tears. I have several more "slides" to show;-)

The spotlight, has a wonderful background to it. Beautiful scene.

@Mirjam: Hi and thank you very much!

Death Valley has such a wide color palette.

@Steve: Yes it certainly does - Thanks for commenting, Steve!

@alex centrella: Thanks Alex...great to hear from you - I hope you have been well!

you have captured a beautiful light here indeed! the centre dunes are illuminated wonderfully!

@DarkElf: Good Day and thank you very much sir! I was excited at the time, that was for certain ;-)

So beautiful Denny, you have captured it so well!!!!