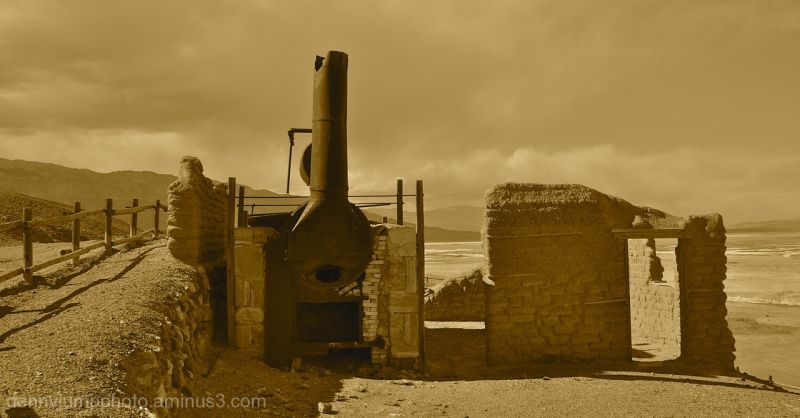 OOPS - My wife will be seen tomorrow!! Sorry...

This Boiler and processing point - and a team of wagons which i wil show you tomorrow - are all that remains of a lucrative operation from the late 1800's. The Harmony Borax works was built by San Francisco businessman William T Coleman to refine the "cottonall" salt from the nearby salt flats at Badlwater into usable Borax. Borax actually comes from borates which are salt minerals. The operation at Harmony continued from 1883 to 1888, processing Borax which was, and still is, used for everything from handsoap to welding. Borax was referred to as "White Gold"in the day and was the most profitable commodity in the region during that time. The high cost of transportation made it necessary to refine the borax here rather than transport it to the railroad many miles away. Teams of 20 mules would pull the wagons of salt from the flats to the works. As time passed, more modern techniques and more accessible locations were found and Harmony went out of business.

To give you some perspective, a 6 foot man's head would be at about the point where you see the oval shaped inlet at the boiler. The stack of this boiler was originally about 3 times higher than it is now.

Really nice series, I love the tones in this one.

@Kenny: Hi Kenny - Thank you so much! I really appreciate your comments. I enjoyed looking at your images - really nice work sir! Take care of the eastsound - I hope you don't mind if I check into your blog more regularly - really cool and unique ideas and compositions, Kenny. All the best -DJ

@Richard: Hi Richard. Thank you very much. I processed this with my standard iPhoto basic effects...Thanks again!

@guillaume: Hi Guillaume! Thank you very much - I love your image today!!

Love the processing on this shot Denny! I remember the TV and magazine ads for the product! ;-)

@Eric Cousineau: Thanks Eric - I did this right in my Mac iPhoto "standard" effects...iPhoto and Aperture (for Mac) really have some pretty nice editing and organization tools...especially Aperture...many actually prefer it to lightroom for organizarion - I certainly do. As for pure editing, Photoshop is still the vastly- preferred but again, Apertre has some really nice tools that I wind up using most all the time. Have a great week!

I love the timeless feel here, like in a Western movie, ghost city under a super light.
Aha for your alert about Mrs Jump ;))

@k@: Hi Karine - Thanks very much. These photos - and the one you will see tomorrow - are all 4 years old...but Mrs J's beauty is timeless you shall see ;-)

this is lovely, Denny - I love the sepia tones. K@ is right - it looks right out of an old gun-sllinger movie ... well done!

@Scene by Sharon Photography: Thanks Sharon ;-) I thought the tone wold go well too. The Aperture and iPhoto tools have really nice sepia an antique tone varieties that go really nicely..Just a click of the button and voila! Chers!

love the processing here, denny! the "antique" touch perfectly fits the topic - ruins! could be part of the setting of an old wester movie! ;-))

@Franz: Hi Franz - Thanks very much...I appreciate your comments so much - you are too kind ;-)

I remember all the different soaps that used Borax in its name, memories of the 1960's.
Wonderful tonal sepia in the photo works beautifully with the old boiler.

@Phil David Morris: One can still find the boraxo style handsoap (the granular handsoap) in boxes at some janitorial supply stores...it is great stuff! I used to have a dispenser in our garage when we lived in San Dieg...after an afternoon of working in the dirt and the garder, I would wash with that and my hands would be (almost) smooth as a baby's butt! Thanks Phil ;-)

@john4jack: Thank you so much, Jack...home today from the cataract surgery and our daughter is here to help out - all is going well on day one...drops, drops, drops ;-)

A great composition with a good choice to go with the sepia processing which helps give this the vintage look. And Phil David reminded me of the Fab detergent days. :-)

@Steven: Thank you STeven - I appreciate it....The soap is (or was) the best!

@Nigel: Thanks very much, Nigel. I really appreciate your support and kind remarks!

I am enjoying this tour, Denny.

Such a cool place. Nice one!

The processing on this shot works so well!

I really love the tones here - I can feel and smell the dust - very cool shot!

Excellent shot and tones. This is wonderfully composed.