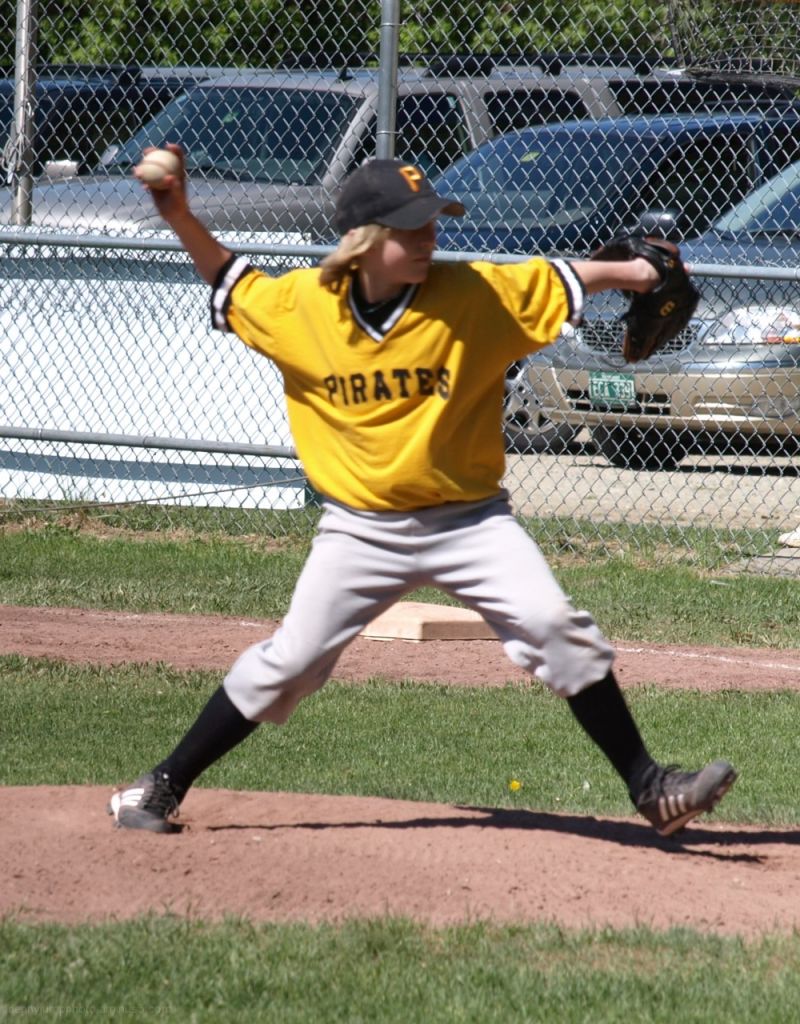 I just have two more 'sports" images from the archives today and tomorrow. I always liked this one. This is our oldest grandson, Justin, again...this image is from 2009 when he did a fair amount of pitching and did quite well.

We just learned that he has, indeed, been selected by his High School Freshman team for this current year 2011. He will, likely be playing as an outfielder for the most part as I understand it, but hopefully, he will also play at the catcher position sometimes. He can throw the ball a "country mile!" Coaches love that. From the catcher's spot behind home plate, he can make the throw to second base accurately. A key skill needed to throw base-stealing runners out. Perhaps even more impressive: He can make a throw all the way to home plate from the outfield without the need of a relay. Coaches tend to go "ga ga" over that talent as the ability to throw that distance accurately and quickly is a very desirable defensive skill...we are very proud of Justin and wish him well this year.

@Monterey John: Hi John -Thank you so much!He's a great kid and he IS intent. He can't stand it when team m,ates do not give 100% and at that age, many of them sadly don't...so we have to calm him down after some games ;-)

Nice capture Denny! Sounds to me like he is going to be a great asset to his team.

@Bill Brown: Hi Bill - Thanks very much...we will see how he does on the Freshman team...he should do well I will bet. Thanks !

@Richard: Hi Richard - thank you very much...a bit fuzzy perhaps in places that it should not be but I still like the feel of this one!

Great action shot, Denny - and congrats to Justin on his selection!

fantastic intensity here ... It looks like he has some real power in his throw. Great news that he has been selected by the high school team - I hope he has great success. This series is wonderful - you have some very talented grandchildren ... it makes me smile

@Scene by Sharon Photography: Thank you Sharon - yes we are darn proud of the boys - all three of them. And their mom and dad have done a splendid job raising them We are truly blessed!

Ah, it is that time of the year again -- play ball! And how nice that your grandson not only continues this passion, but that his skills are recognized so he can play on the team.

@GJC: Thanks GJC - we have confidence in Justin - he is a great young man - hard to say that after all these years but he is indeed becoming a very wonderful young man!

@Williams: Hi Paul - yes we are definitely proud! A really good kid and young man - Thank you very much for your kind comment!

Good technique in his delivery Denny! Good to hear that he is still pursuing his dream..... ;-)

@Eric Cousineau: HI Eric - Thanks very much...we are happy for him!!

@john4jack: Thanks Jack - could have been a bit more careful with my focus work but I like the scene generally (note the tan car in the parking lot - perfectly focused ;-) oh well)

Great action capture Denny ! You can be proud of your grandson... Congratulations. It's a sport that is really attractive, even if I never understood the rules ;) Wishing you and your family all the best. Hugs :)

@Tamara: HITamara - Baseball is like the English Language - all kinds of rules, all kinds of caveats...better to just have a beer and watch ;-)

ps - that fast ball was going to be a total blur

@john4jack: Absolutely - I would have needed to double the shutter seed at least to even have a chance--

A nice action shot with your grandson the pitcher.

@Becky: Hi Becky - Thank you very much...he actually is very very strong, deceptively so really...he does not appear that way but he is...I could tell you stories!!

Great action shot that you've captured here! The chain link fence seems to help Justin stand out in this composition, rather than act as a distraction.

@Steven: Thanks Steven -that's a great point, I see what you are saying...just too bad I was a bit "off" on the focus but that's why I keep trying ;-) Thanks again and welcome back sir!

I love stop action shots of sports. And this is very good form, too. Great to see your grandsons in action, proud Grandpa!

Nice of you to share! Great to get to know the grandkids. I loved watching my son play baseball for many years!