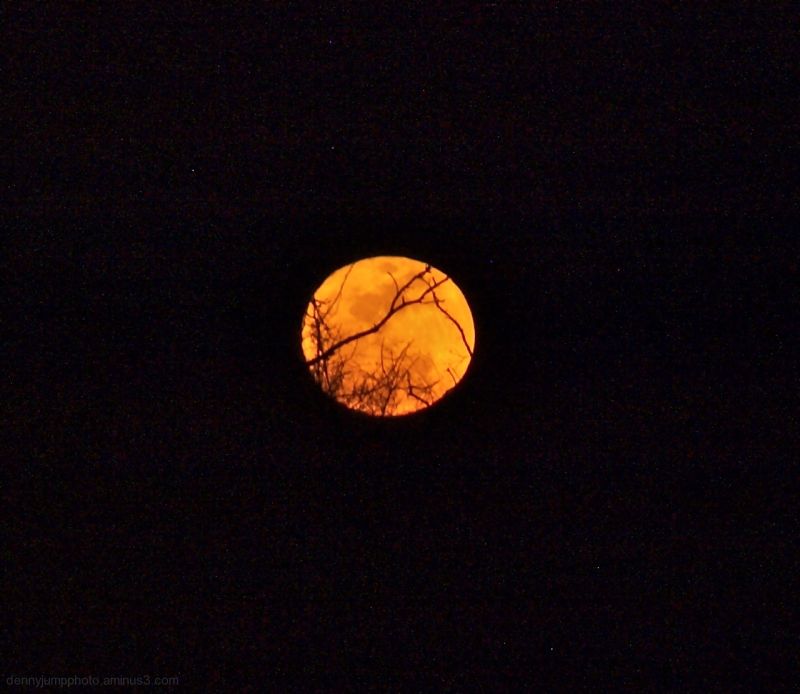 The full moon in March is traditionally referred-to as the "Worm Moon" by First Nation - Native Americans because the soil generally begins to thaw and loosen in March and the worms begin their activity. This year, in addition to the traditional name, the March Full Moon was also dubbed "Supermoon" because of its brightness and proximity to the earth during this particular cycle. These factors helped to make the moon appear much larger than a "normal" full moon would appear. That evening of March 19, 2011, Barbara and I drove out to Merrill Creek Reservoir in Western New Jersey to watch the moonrise. It was getting dark by the time we got there and my poor little Olympus Evolt E-510 is a sweet little DSLR but due to several factors that I won't bore you with, it just has no chance in low light scenes without throwing out tons of noise into the image quality, so I simply did what I could by "going with it" and I tried to capture this moon rising when it was still low to the horizon. I caught the moon behind some trees as it rose. Of course, as dark as it was, I could not include a foreground element, but later, after cropping just a bit at home, I was happy to see some good color and feature on the moon - and the shadows of the tree branches made the moon look like it had giant cracks in it. So there you have it - my "Cracked Supermoon."

@sunstone_maria: Thank you so much, Maria!!

@DIMITRIOS: Thank you very much Dimitrios!

Super shot, Denny - and very interesting information as well. A journey well worth while for this magical image!

Despite the noise a super capture Denny! Unfortunately we were unable to see it as we were overcast and snowing..... ;-)

@Eric Cousineau: Oh my goodness!! Well it was great let me tell you ;-) Thanks Eric! I am saving up for a monster camera later this autumn...

I like the use of the tree branch for the cracked effect - nicely seen!

@Jason Politte: HI Jason -Thank you very much! I appreciate it ;-)

Nice capture and share, Denny. I must say, this reminfpds me of an MRI I saw of my brain anuerysm.

@LauraS: Oooh that would be scary..sorry about that ;=0 but thanks

@john4jack: Thank you sir...counting the days uintil I can get that D700 which unfortunately is made in Sendai and the prices and stocks are already going wacky on them!!!

It works, Denny. A very cool effect and the color is awesome.

@Kenny: Thanks Kenny -Yah Iw as really happy with the color - thanks alot sir!

Great color and I actually love the encroachment of the branches into the view of the moon, particularly since they are a nice silhouette that matches the night sky.

HOLY COW ..... I love this!!!
I love the branches in the frame as well - it really adds to the creepiness
great shot!

@Scene by Sharon Photography: Thanks Sharon...are you recovered from the birthday festivities??

This shot is wonderful. I love that we see nothing but the moon crossed by tree branches. Fantastic colour & a great informative description. Cheers,

@Williams: Paul I definitely appreciate your nice comment - thanks very much - welcome back - thanks for the Mission Bay Beach shot ;-)

A very cool image Denny - I half expect to see E.T. peddling across face. Nice.

@Stephen Phillips: Thanks Stephen!! ET wiped out over that big branch in the middle...

How Denny been? Back in NC from my mini vacation. I like this image. That was a great moon that night...

@James Guillory Photography: HHI James - Yes,welcome back - I just noticed two of yours that I had not picked up on...they are great! Thank you so much for your kind remark here! Cheers!

I don't know how you held on to this one. I would have cancelled everything and posted it the day I took it (well next day, you know what I mean).
Such a good capture with the branches being sharp and in focus.

@Curly: I was almost not even going to post it - I just did not think it was that great, then I figured "what the hell" and stuck it on ;-) Thanks very much Curly...I really appreciate and value your comments...best of luck with your computer issues!

Great photo! It reminds me of the moons in the fall near Halloween! You could almost see a witch flying by! That was some moon and I was glad the east coast had a clear night to enjoy it!

@Elaine Hancock: Yes it was a beautiful night wasn't it? It was rather windy up here and pretty cold, but we handled it - Barbara stayed in the car viewing through binoculars while I froze my fingers off trying to get the blasted exposure right - I guess I sorta did ;-) Thanks very much Elaine - happy spring;-)

@Francisco Romero: Thanks Francisco -I like that idea ;-) Have a wonderful Friday sir!

the only thing missing is the witch on the broom ..

@alex centrella: That's for sure ;-) Thanks Alex, nice to hear from you !

Hey, Denny - I really like the branches in there, they give a bit of a sense of scale. The warm color is awesome, too! ...I waited with my camera for that moon, but clouds rolled in, so it was not meant to be. However, my brother took a fantastic shot of the moon that night: http://chiblackhawkfan.aminus3.com/image/2011-03-21.html

- His shot lacks the mood that yours has, though!

Vampires would love that, so do i !

interesting story, stunning capture! i've tried to "catch" the moon several times, but always end up with a bright circle without any contours! am3 friends have pointed out some techniques to me which i will have to try out and see! well done, denny!