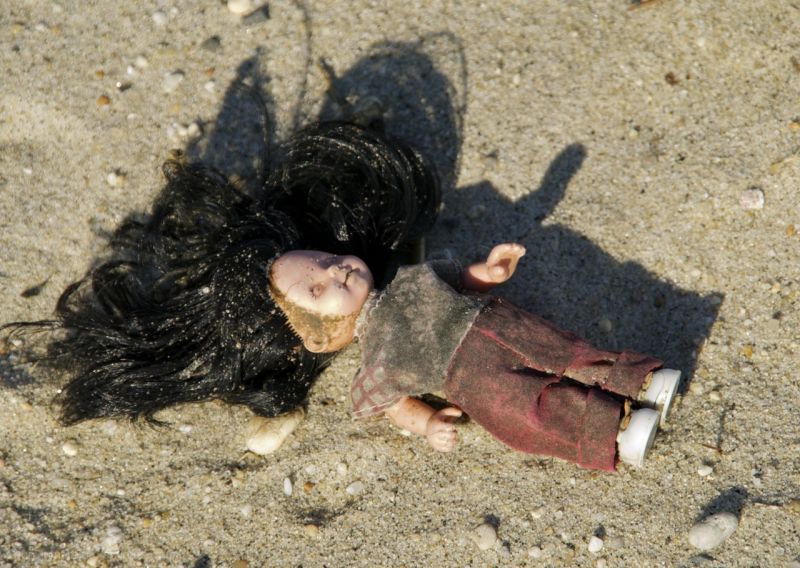 I don't usually go in much for this macabre stuff....too much of it in real life....But upon departing the beach at Long Branch, NJ, we spotted this doll that struck me rather like some kind of a sinister thing that would come to life and pluck your eyes out because of her prolonged exposure to the sun and sand...rather like a "red freak" (amphetamine user) back in the 60's....And then, of course,THAT thought running through my mind segued directly into the great old Canned Heat number entitled "Amphetamine Annie!" (If you remember that song, don't admit it because it provides proof of your age) ...anyway, from there, my mind went in a million more directions, as it usually does.... Coming back to earth (somewhat), I figured that, at the very least, this poor, abandoned article resembled someone who had really spent way, way, way too much time on the beach...."fried" I think would be the term. To say the least! So, hopefully, your Tuesday is going (or has gone) better than it has for little "Annie" here!

@Richard: Absolutely weird...In fact, others have often referred to me in the same way...Thanks Richard ;-) Have a great day!

I had to do a double take and make sure I had actually clicked on your blog, then I read the text and it all made sense. I remember Canned Heat's " Amphetamine Annie" and I'm not that old. I used to know the drummer for that band.

@Kenny: That guy was an awesome flippin' drummer -I need to look on my album notes..can't recal his name he was good though - Thanks Kenny too fumny ;-)

"your mind might think it's flying, baby on those little pills but you ought to know it's dying, cause speed kills"

@Kenny: "I wanna tell you a little story, 'bout this chick I know, her name was amphetamine Annie,
always shovelin' snow" I LOVED that song, it was awesome and the rest of the songs were even better on that album!! They had a great band for the short while... Thanks again Mr Kenny..

Watch out Denny, you know she talks too, telling you all about her story, the abuse,
the lies, the crocodile tears of molestation, or no I think I have read her all wrong !!
She just seems to have fallen out of the bus during the last pub crawl !!~))

@Phil Morris: Either slant works for me ;-) But you are so right Phil...so many stories and inferences...thanks very much sior. I have been in a really weird space lately ;-)

Well seen and great shot. Reminds me of one of the weirder characters in the last Toy Story film. Yes, this doll looks like she has been On the Road Again a few too many times!

@Stephen: The Toy Story most recent one was almost over the top...very intersting...thank you Stephen ;-)

So many abandoned / lost toys and dolls around . . each one tells a little story and this looks a sad tale for sure !

@Ronnie 2¢: I quite agree, Ronnie..I see things like this on the road or beach or trail and often start to imagine and wonder all sorts of things about them...perjaps it is becasue we are closer to animation than we know...thanks very much ;-)

I love your story about her - it is wonderful that you found this doll and captured her "story" for us - I think it is a wonderful silly Tuesday shot.

@Scene by Sharon Photography: Yes but if I was truly concerned I would have picked her up and brought her home but i was afraid to pick her up ;-) Thanks Sharon....

Denny I love this photo. I don't see anything macabre about it but everyone's perspective is their reality. I see it as being more of a found object with it's own playful history than a lost one.

@Ralph Jones: LOL I like your approach - reminds me of the way Ahmad Jamal approaches a song...lilting, lighthearted, than a swift uppercut ;-)

Very good frame. And your story really fits the photograph. Have a nice Easter

@Francisco Romero: HI Francisco - Thanks very much - I wish you the best of Easter's ;-)

She does look fried. Great catch...fun to read your thoughts about it !! :-)

@DULCIE: Hi Dulcie...thanks very much....Not sure if that stuff that goes through my mind is "thought" or just moths looking for a nest...

Poor little one , a girl will missed her !

@Lydia .Dd: Yes, that was also one of the many thoughts which raced through my cavernous and mostly empty mind...Thank you Lydia ;-)

Looks pretty sinister to me.:-)

a bit eerie, i agree, but well seen and captured, denny! (i had planned a similar post for my maine series a while ago, but then decided against it. here it is, if you're interested!)

@franz: Thanks Franz...damn office here - they won't let me access your link..I'll check it out tonight ;-) thanks sir!

@B. Thomas: I thank you and Stephen does t....Hey get away from that butcher knife Stephen... 'S'cuse me Barbara, Stephen was going for the knives.

Great shot and funny caption and title; even though the doll is worn and tattered -- you can feel the warmth of the sun on the sand, have a good day!

You make me laugh! Poor thing...she lost her human friend. Dolls in general freak me out, for that same fact that I think at any moment their heads will turn and blink at me....I also have a complete fear of clowns, but I digress. Nice spot, very funny, weird, awkward Tuesday :)

@Nina: Nina I am COMPLETELY with you on that, good buddy! Clowns and those freakin' dolls OMG I hate those things thanks to those awful movies with the dolls that turn into monsters...I survived a year of combat in Vietnam but keep me AWAY from those blasted dolls... :=0

She looks like Chuckie! But, its a nice capture. You wonder who she belonged to. They were probably very sad that she was lost.

@Elaine Hancock: On the brighter side, I guess it could be chuckles...and I would imagine some poor little kid does miss her...;-)

Thanks Denny!
First impression on this image...is like a scene from a horror movie :)

Outstanding capture for a Silly Tuesday Denny! Like a bad acid flashback!! ;-)

Wow, it's a horror movie! Great creepy shot. Good eye to catch that!

@Bettina: We were walking, looked down, and here she was that made it even spookier! Thanks Bettina!

Looks like she's in a state of rigamortis. ;-) I think I'm going to have nightmares tonight. She better get her head shaved before returning to school. :-D

@Steven: I quite agree!! Thanks Steven!

Yes, this doll belongs in a horror movie. Scary!

ha! Fabulous!! It's so full of personality and story - ah - the days of the dolls - twilight zone revisited!
I do remember that song... ouch.

BTW - I love the shadow on this and lighting - it really brings out the "I'm going to jump up any minute and chase you down the beach" feeling!

Gee, thanks for the nightmares tonight! :-)