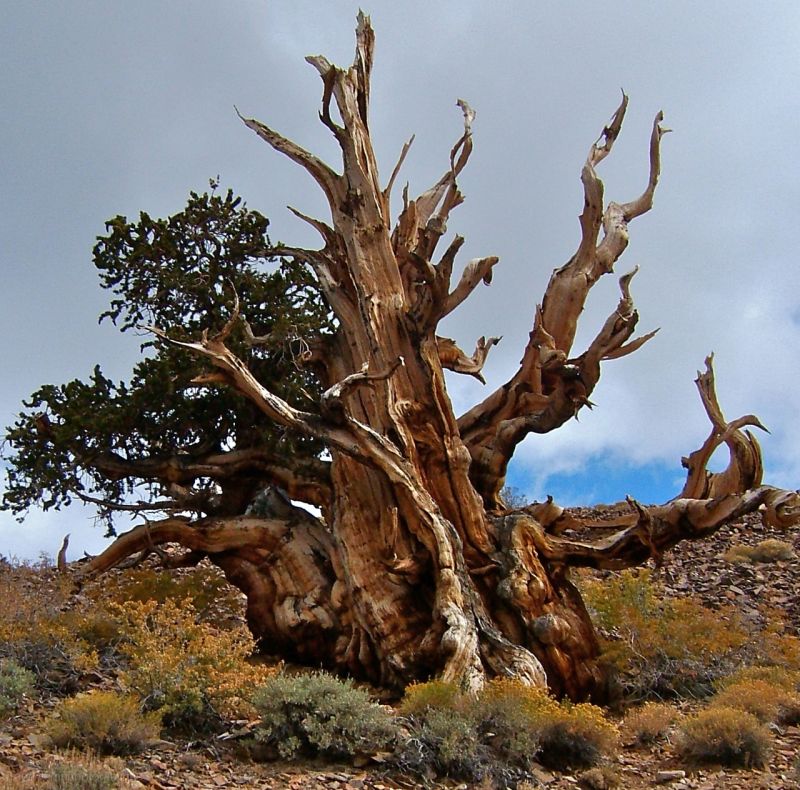 Posted by Denny Jump (Bellevue, WA, United States) on 1 May 2011 in Landscape & Rural and Portfolio.

This one looks as if she could be related to the Wizard.. I call her "Twisted Sister." She is probably around 2500-3,000 Years old.

The White Mountains, in which these trees exist, stretch a mere 110 miles north and south and are in a "rain shadow" of the Sierra Nevads, which lie to the west. The predominant moisture comes in to California from the Pacific (west and northwest) and flows from west to east accross the state. Since the White Mountains lie to the east of the generally higher (and longer) Sierra Nevadas, a typical yearly rainfall for "The Whites" remains between 6 - 12 inches per year, while the Sierra Nevada Mountain range can receive, in terms of rain water (not snow, which is usually much more), around 20-30 inches a year, depending on location and altitude.

In the Rocky Mountains, there are different varieties of Bristlecone Pines. In addition, Bristlecone Pines closely resembling this variety can be found In Nevada, within Great Basin National Park. But the concentration in numbers and this specific variety is only found here at this location in the White Mountains.

This is excellent, Denny! What a specimen! Great photograph.

these trees are so incredible!!

@Scene by Sharon Photography: They are for sure - I am glad you're enjoynig them Sharon...lets plan that West Coast Canada and US tour soon!!

Too cool - just the loved the twisted and gnarled nature of this one. She looks a fair size. Do you remember about how tall she was?

@Jason Politte: Hi Jason ..Buzzing in and out this weekend- I will respond better to all later but this tree was around 20( ) feet tall at that point, if I recall correctly...Thanks very much for your kind comments ;-)

Another great photo of a magnificent subject. The text is very informative as well.

@Kenny: I appreciate your comments greatly, Kenny - Thank you so much!

Well seen and captured Denny! This is really gnarly dude! ;-)

@Eric Cousineau: Thanks very much Eric!

Oh, if only those old twisted limbs could talk !

@Ronnie 2¢: That's forsure...can you imagine the tales? Much appreciated Ronnie and Lilly!

Fabulous title, fabulous hot Deny, what else can I say? Fantastic!

@Richard: Many thanks Richard - I love your images so much, it is a privelage to hear from you ;-)

Great title! This is another beautiful composition!

fantastic! All of these shots are just amazing -