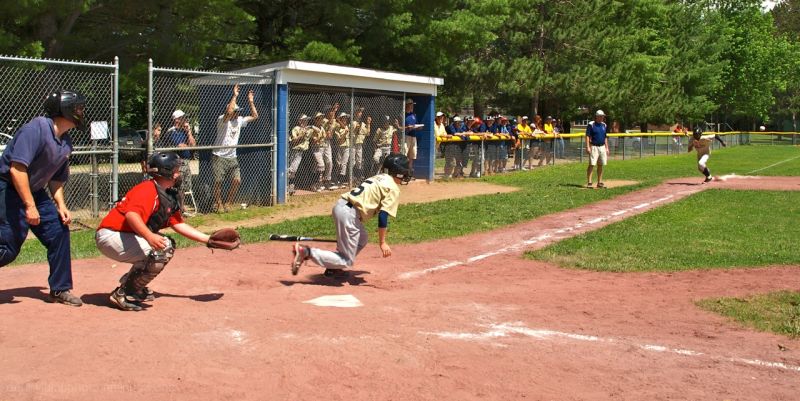 Little League Baseball -"It's a Hit!"

Can You find the Ball? (Answer below)

Here's Tyler, our 11 year old grandson, charging off to first base after smacking a hard-hit, "two-run double." He'll round first base and wind up on second after driving in two runs.

If you look closely, you can see the ball just beyond and to the right of the third base bag (roughly, the right hand corner of this frame). From this angle, it appears to be heading "foul," but it landed in left-center field and both fielders had a problem with it. This is in Essex Junction, Vermont.

So here we are - This is Little League Baseball - probably just about everyone is more familiar with Little League than with Babe Ruth League, which is for the older players. Little League is for 10, 11, and 12 year olds (and some 13 year olds who manage to sneak in). The Little League World Series takes place every year at Williamsportt, PA whch is just a 1-1/2 hour drive from our home in Easton, PA. Teams from around the world come to play, along with literally thousands of fans, and families of the players. And don't kid yourself, anyone can win this thing...as history has shown.

Great action shot Denny! I guess my eyes were sharp tonight, it only took me about 3 sec. to find the ball.

@Bill Brown: Well you've been chasing those kiddos around and they have you tuned up ;-) I sure have loved those photos you have been digging out for us - wow - thay are wonderful, Bill!

Captured the action perfectly, maybe a career as a sports photographer beckons Denny?

@Richard: I can't run ;-) Maybe baseball would work, you pretty much have to stay in certain spots...American Fodtball would be a "butt buster", my knees wuld be completely shattered after running up and down the sidelines of a playing field..But I must say, it (this sports photag "thing")seems to come for me rather nicely. Thanks very much, Richard!

Not only the ball but the guys themselves seem to have been launched up there in the same movement ! I don't understand the slightest thing to baseball but it's so typically American i like it for the collective imagination it is included in plus it reminds me of some painting by Norman Rockwell (sorry, i'm a lil' frenchie ;) Have a superb day, dear*

@k@: Hi Karine - And thank you very, very much for the Norman Rockwell Link which is just wonderful and so very appropos. I believe that Norman Rockwell (and his artwork of course) exemplified "Americana." As for understanding baseball - it is much easier to simply go to a game, sit down and relax, and watch it unfold before you. I assure you, there will be lots of time for catching up on your sleep, reading, visiting with friends on the phone, and then, oh yes, there will be those thrilling moments where something exciting will actually happen in the game and then, magically, voila - you are all of a sudden drawn to the joy and the mystique of this good old game and you shall be a "fan" foerever..Just aa I am a fan of your wonderful images and work! Have a great week and weekend, K@ All the Best.. Denny ;-)

@Julie Brown: Excellent job Julie..and thank you !...Also, I have a surprise for you in a few days - perhaps tomorrow - I caught some shots of a Mergaran (??) is that what they a re? Water birds with snazzy hair and ducky feet...I'll post it tomorrow..

I agree with Karine that this has a Norman Rockwell feel to it Denny! The sheer excitement of the dugout all on their feet is palpable! The split second action at home and third base is wonderful! Well done!! ;-)

@Eric Cousineau: Hi Eric - yes that was really nice of Karine to send that collage as well...she is a super lady. Thank you very much Eric..I was glad to hear that your neighbors are almost done with their rebuild - good heavens that was a BAD fire!! Stay well, sir. I'll be checking your blog momentarily :-)

Wow - great action shot, Denny! Every player in the frame conveys a sense of drama. And I like the tension of the players in the dugout as they grip the fence. Super angle as well as we see the race between the player running for home from 3rd and the ball - which I think is flying off to the right of frame.

@Stephen: Thank you so much, Stephen! ALl the players on that team seem to have a real sense of comraderie and verve. That is a good sign always. Thanks very much for your wonderful comment sir!

I agree with the comment above about this having a Norman Rockwell feel to it - well done, Denny - well done! Have a fantastic day!

@Scene by Sharon Photography: Hi Sharon - Thank you very much - Friday I turn around and drive back up to hopefully see another game and to pick up my beautiful Barbara ;-)

@Williams: Thanks very much, Paul! They are fun to watch at this age, they are all getting good enough to keep the games interesting...Cheers ;-)

Excellent action shot with both Tyler taking off for first and the player on third base heading home. Well done, Denny!

@Jason Politte: Hi Jason - Thanks very much - it was a very good game- and they won handily!

I spotted it right away, just sensing where it might be from Tyler's posture. Good hit, boyo! Great action shot, Denny! This has the moment's instant adrenaline fully captured, and it reminds me of what I love about baseball. There is all the nuance, positioning, tactical dynamics, and then these glorious explosions of action.

@Rick: Absolutely, Rick - you are so right. I really appreciate your kind comment, also. Being the type of guy that I am, I am never really sure about many of my images and I often feel that folks are being pretty kind to me on many of my shots...But I keep trying to learn, that's all I can do. It IS fun trying though, that's what keeps us going I think! Thanks again sir!

I hear you, Denny. I'm still a rookie in this photography passion, having really gotten into it during the summer of 2008, and as such it is both inspiring and intimidating to see so many technical wizards around who know so much and post amazing images. I focus on the gut-feel joy in it, and if I'm seeing steady improvement in what I capture, I'm happy. I like your humanity and passion, which is evident in so many of your photos. I also like being kind to others, and unless I see something glaring (like a huge watermark in the centre of an image) it takes a lot for me to offer up critiques. Usually if I don't like a shot, I'll leave without commenting. On the other hand, I have definitely benefitted from some straight-shooting suggestions here from people whom I respect, and I am always an open mind looking to learn. I'll draw my last breath that way. Cheers, sir!

@Rick: I'm with you all the way, Rick...my sentiments exactly in all that you have stated...Cheers!

@Sam: Hi Sam! Thanks very much..it is a fun and exciting game for the kids!!

Nice action shot, you anticipated it correctly, but I always laugh when I hear or read of Americans taking about world series. :-)

beautiful too :) I am usually short on my words and not so generous , but what about you ???? ha ha

@MARIANA: I know, but usually I say TOO much ;-) And I really did think it was beautiful in so many ways ;-) Thanks Mariana - All the Best

Great capture, love the look of anticipation of the guys in the dugout. Nice action for your grandson!

@RBL: Hi Ruthoe - Thank you so much. The guys in the dugout were a riot - theya re quite a unified team..all for one and one for all and all that! Thanks again ;-)

This is a superb stop action shot Denny, the ball is motionless as the
players are intent on catching it, there is all sort of player dissaray as
they scramble. Superb action shot Denny, where you certainly have a
grip on all of the fast paced action which emanates fiercely here.

Wow Denny! Another great action shot! This is excellent! I am looking forward to see how the game progresses!

@Elaine Hancock: Thank You Elaine - I may put one or two more on in a few days But they won ;-)

Nice action shot again. For some reason I spotted the ball right away.

@B. Thomas: Because you are a Baseball fan ;-) Thanks Barbara!

I'm cheering on the sidelines! Great action shot. I have so many of these myself! :))

Beautiful capture of action here Denny! From your grandson Tyler to the man on third base making his way home. A well-framed shot.

Oh yes, I see it. A cool shot of your future major leaguer.