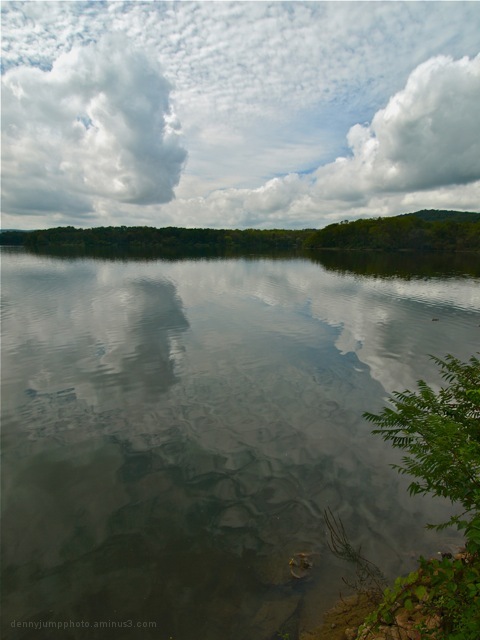 I have never been able to understand why we can't come uo with some kind of "Water Logisitics System" like a pipeline or aquaduct that allow us to move large amounts of water from one part of the country to another, California does it within their State. So, why can't the US, as a whole, do the same thing? Talk about a jobs producer! Here in the Mid-Atlantic and Northeast, we have had MORE than a surplus of water, while Texas, New Mexico, Arizona, and many other states have been suffering unduly because of terrible, record droughts. Although this may be pretty to look at, our skies have been like this for quite awhile here in Eastern Pennsylvania and New Jersey. Rain is hitting us again with creeks and streams already filled to the brim and now flowing over again. It just doesn't seem fair.

fantastic reflections, you could almost flip the picture upside down and nobody would notice. Rain, what's that?

@Chris Pereira: Hi Chris- Thanks very much - the clouds were doing some cool things that day..I appreciate your comment ;-)

Interesting concept to have a national water-distribution network on a grand scale . . could transform the entire landscape with irrigated deserts . . Meanwhile, I am trying not to say your image looks delightfully like a watercolor . . but it does !

@Ronnie 2¢: Hi Ronnie - wellm thank you very much sir! I will definitely take that as a compliment ...Congratulations on your 500th ;-)

@Williams: Hi Paul - Thank you so much...all the best sir!

In fact you are asking for kind of Roman Empire works with aqueducs bringing water from the mountains to the big cities....
That's a real question.
Nice composition !

I think of the Roman aqueducts we saw in Israel ... I think you should pass this along to the White House to be added to the jobs program!!! Or maybe Christie's office in NJ. ;D

@Judy aka L@dybug: Thanks Judy..I actually live in PA but Christie's office is probably pretty busy right now anyway ;-) There are many issues that would affect actually doing this but what the heck, it's an idea!! Thanks very much ;-)

The fine reflection and beautiful clouds do make a fine picture even if they do tie in with too much rain and flooded conditions. I like your idea of someway to share the water over the country.

A very sweet image with those clouds so well reflected, plus some damned good points raised in your text. The USA must be among the most diverse landscapes on this planet, what with deserts, everglades, tropics, mountain regions, rich rolling farmland, and so much more... you would think such an advanced nation would place a HUGE priority on water carrying infrastructure. There's more emphasis placed on pipelines to suck fossil fuels through a finite straw.

@Rick: So very well put, Rick. Another thing that the US has plenty of is politicians and naysayers...I am sure that the ideas that might truly be beneficial would be shot down like a flock of ducks flying over an NRA convention....As always thanks very much for your excellent and pointed viewpoints ;-)

Fantastic reflections DJ...love it! And my gosh...havent we had enough! Yesterday was crazy with the intense downpours and thunderstorms all day long. Looking forward to a few dry days and Fall temps this weekend (53 on Sunday!)
Hope you are safe and stayin dry!
:)

@Nina: Well put, Nina - hey I loved your travek series - that was great ;-) Looks like you guys had a great time,,,
As for teh rain I am sick of it but the problem is, that terrible heat we had in July totally fried many of the leaves so now in the Lehigh Valley we have a combination of stripped trees / green trees// trees that are poop brown (pardon my terminology) Cheers kiddo!

Wonderful capture of an absent blue sky in our area, beautiful reflections too!
It's thunderstorming here now, can't escape this weather. Have a great day!

@RBL: I am at work in CLinton, NJ and I think we just got your thunderstorm....isn't this something for September?!? I can't believe it!! Thanks Ruthie!!

WoW ! Look at these reflections.... This is really fantastic Denny, I really love the clouds and the colors. Wonderful work ! Have a great weekend :)

@Tamara: Hi kiddo - Thank you so much...I did like the reflections on the water that day...and the water was so still yet so m,any clouds in the sky...I hope you have a wonderful weekend and have found some "decent wheels" :-)

Amazing reflection. I really like this. I agree, we need to share the water. Hey, the sun is finally out today and I am happy!

Wonderful, the reflection is great!

all it takes is the political will and the money - both of which seem to be lacking at the moment. i'm sure the engineers have it all planned and are ready to go! if they can build oil and gas pipelines - where there's lots of money involved, of course - they could just as well build water pipelines. but ... see above!
aside from this - and i don't know if makes any sense in the first place - this is a superb image, denny, with very attractive colors, wonderful reflections of the brilliant clouds, and all this captured in a very appealing and effective frame!

@franz: Hi Franz - Thank you very much and I quite agree with your assesment about doing the project....As for the image itself (and at the risk of sounding conceited) I rather like this shot too ;- It is certainly not technically the greatest shot, but I loved the reflections and was fairly happy with how this all came out ;-) Now, if we could just put people to work doing things FOR the environment instead of TO the environment!! Have fun with Emilia!! ;-)

A beautiful capture with great reflections, Denny! The cloud formations help give this composition nice depth. We have been getting lots of rain too. So far the wettest September on record. Blue skies just came out this afternoon.

@Steven: Hi Steven...Same here, we had lots of clouds still but the sun did come out this afternoon....Then it was sun/rain/sun/rain...Yes, we have had a record setting August and September when it comes to rainfall. Thank you very much Steven!

This is a beautiful watery image and i too think it looks like a painting, I love it. We have had a wet summer too in Scotland in the North, in England in the south they have had a very dry one but even in this little island of Great Britain, there is no distributing of water, very interesting point.

@Christine: Hi Christine - Thank you..I know there would be many "hurdles to clear," but we should try I think. Thanks again for your always kind and generous comments ;-)

Denny, this is Richard, laying in bed and using Christine's iPad. This is a wonderful shot.

@Christine: Thanks so much Richard...This is so nice of you...sorry Iwas so late in getting a comment back to you...

wonderful, where the clouds meet the earth...

@peter.K: Thank you Peter..I am grateful for your kind comments and for visiting my blog ;-)

A wonderfully dramatic sky in this shot Denny! Nicely captured! ;-)

@Eric Cousineau: Thanks Eric - Much appreciated!

Which way is up? Cool reflections.

You made a very pretty image here, Denny. You have a good idea-if the could build a pipeline for oil down from Canada, why couldn't they build one to transport water?

@Julie L. Brown: I completely agree Julie! Thanks very much ;-)

Wow Denny! You captured a real beauty here, and it most certainly does have a watercolor quality to it, especially in the reflection. Really fantastic shot!

Beautiful clouds and reflections. I think you are on to something Denny. If we could just figure out how to get some waterways to flow east to west versus north to south the problem could be solved.

@Bill Brown: Thank you VERY much sir...always an honour!! Hang in there!

Wow, wow, wow, another absolutely stunning shot! You are on fire, Denny!

@Bettina: Thanks very much, Bettina,..sorry to be such a pain today ;-)

@LauraS: Hi Laura -Thank you very much! I hope you have been well ;-)

@Phil: Hi Phil...Thank yuo so very much for your very kind comments,,,I do appreciate them all ;-)

@alex centrella: Hi Alex - Wow it's great to hear from you - thanks very much!

Hi Denny ! This is beautiful image where reflection looks more amazing than clouds themselves. This reflection in water has such a great texture - looks like you did a separate rendering of this part and connected with sky ;) I really like it a lot :) And yet, that symmetry is always what is very appealing in nature shots and reflections .

@Mariana M.: Hi Mariana -Thank you...this is all one shot, I am not smart enough to do the bracketing thing..I just edited a little in iPhoto to get some shadow out and voila! Thank you so much ;-)

The reflection is like a watercolour mirage - beautiful painterly image!

Wonderful reflection and very interesting debate. Lack of funds and political mayhem at current is the reasons why it won't happen for a long time.

This is a beautiful image that once again looks like a classic realistic painting. I love the reflection in the water and the clouds in the sky.

A beautiful shot with those lovely reflections. With climate change, weather extremes may become the norm.

I agree. Here along the Missouri we had massive flooding this year, while the southwest remained parched. First thing I thought of, amonst all the wrangling over oil pipelines, was why not spend that money and create a pipeline to ship the water where it is needed! I love the sky's reflections in this image.