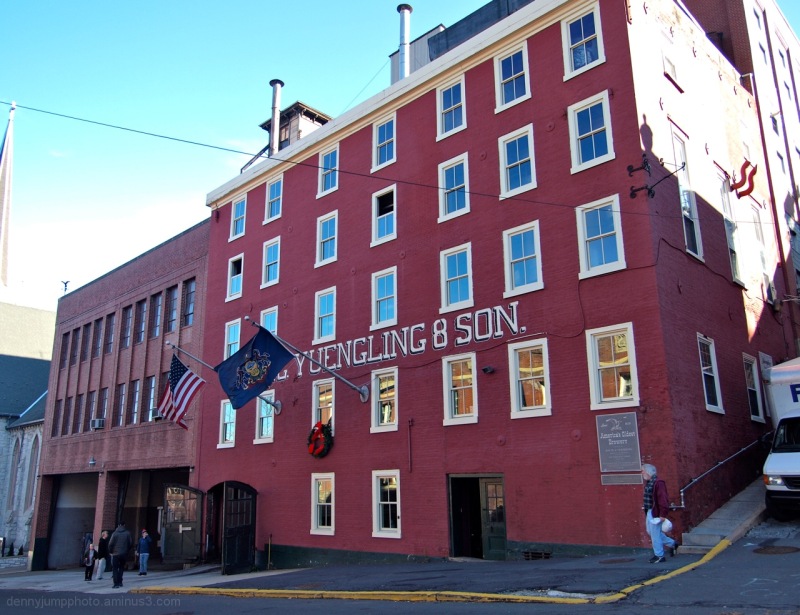 D. G. Yuengling & Son is the oldest operating brewing company in the United States, established in 1829. It is one of the largest breweries by volume in the country, and is the second largest American-owned brewery after the Boston Beer Company, makers of Sam Adams beer

Yuengling produces about 2.3 million barrels annually, which as of 2005, placed it sixth among American commercial breweries. Besides its two Pennsylvania facilities, Yuengling also operates a brewery in Tampa, Florida. Yuengling is pronounced "ying-ling," and is an Anglicized version of Jüngling, the German term for "young man". The family-owned brewery has traditionally changed ownership through the purchase of the company by the offspring of the previous owner. Due to the popularity of Yuengling Traditional Lager in Pennsylvania, it can be ordered by simply asking for a lager, especially in eastern parts of the state.

I will post more information about the history of the family and the Brewery tomorrow. Meantime, I should probably announce here that I did not taste any of the beer, although I have had Yuengling Beer back in my imbibing days. On December 25, 1990, I went on the wagon for life. Some people never know when to say "when" I finally realized that fact back in 1990 and this Christmas I will be 21 years sober. Nevertheless, I am a happier guy then ever before and , besides, being a "Child of the Sixties," I still have lots of residue in my body ;-

And, by the way, that gang of 5 fellows standing in front of the 2 large opened doorways are my Son, David; Son-in-Law, Steve; and 3 Grandsons Justin, Tyler, and Ryan! Now - on with the tour :-)

Excellent historical commentary Denny. By-the-way, we will be spending the Christmas holidays on the east coast (Maryland). As I'm wandering around, I'll be on the lookout for the Yuengling brand.

@Bill Brown: Hi Bill - Thanks very much...I wrote you a note on your blog...maybe we can at least do an introductory phone call at some point?? Talk to you later :-)

Nice shot and really interesting documentary. Congrats on your 21 years

Breweries were such solid no-nonsense buildings back then . . today, it seems fashionable to put all the working parts on the outside !

@Ronnie 2¢: I quite agree...I was quite surprised, myself, at the truly utilitarian nature of this brewery and the compactness!

Really interesting information, I would never have guessed the German connection.

@Christine: Thank you Christine! You might be surprised at the number of GErman, Dutch, and other descendants that live here in Pennsylvania and other states....and how far back their familie and heritage goes ;-)

@Gérard Beullac: Hi Gerard! Thank you so much ;-)

It is a wonderful building to go along with its history and product. This is an informative post, Denny, and I congratulate you on the successful wagon riding! I was always a social drinker (of course drank my face off in the late teens early twenties years) and many years in rock bands afforded me chances to imbibe, but back in 1997 when I became owned by a bank via mortgage, I decided to stop entirely for three years. Easy because I had never needed the stuff, and after I resumed again it has come down to just my trips to Victoria where I visit family as my one time to have a few. Good on ya, Denny!

@Rick: Thanks Boss...APpreciate the support and I truly admire and salute you too...The music and artistic world are NOT easy places to regulate oneself in when it comes to these factors...I salute you again ;-) ANd, as I mentioned, I have so much s**t left in me I am on a natural high all the time anyway - it all comes down to how you think and how young your mind is...I still think of myself as a kid and I love it that way!

It's a tidy looking place and it sounds like they have a lot of fans. A fine looking shot.

Such an appealing shot. Love the way this building hugs the hillside.
(My one visit inside a brewery was quite an experience....the smell was overwhelming, my mother was covering her nose, and for some reason my mother, aunt, sister and I all got the giggles, which we tried to hide from the tour guide. Thanks for the memories !! :-)
By the way, hats off for 21 years sober...may you have many more !!!

@DULCIE: Hi Dulcie - Thank you so much...I can't imagine what the "aroma" may have been at the brewery you visted that would be bad...usually there is grains, cereal, malt, stuff like that, not too bad...Must have been Miller... And thanks for your congratulatory words too...Yes I want to make at least another 21 years but that is only partially in my hands ;-) I don't really miss it, I'm such a goofball anyway :-) All the best - DJ

Good solid industrial foundation with 64 windows (if I'm counting correctly). You might like to suggest they call their next brew Windows64, they might get away with it.
I was hoping they might have brewed beer.........., oh it's no good Denny, you'll have to take a trip over here.

Hang on a minute, is that a Temperance church next door?

@Curly: "Good Eye," Curly! It is very likely not a Temperance CHurch per se, but it is definitely a CHurch...I forgot to see what variety....probably Episcopal - they drink like fish!

Great capture of the brewery, love the rich color on the building.

Hi Denny, Great shot! Congratulations on 21 years. That is very special. I commend you for that.

What an eye-catching red to be painted! I first thought that was a fire station right next door to the brewery with the large overhead doors. And I thought those were firefighters out in front until you stated they were from your family. Congratulations on your 21 years of sobriety! I bet your beer belly disappeared real quick! :-)

now i know where this noble brew comes from ... i learned to like it during my recent trip to PA and i admit i had several pints while there (after all, it WAS the first heat wave of the year ...). you can see my "memories" here, if you like! ;-))

What a beautiful building, just so solid and perfect. Just back home from doing my Jazz radio show and your picture is a lovely way to let my mind travel

A wonderful image, but more importantly, congratulations on biting the 'bullet'. We've imbibed, and stopped and sometimes do a little now, but not to excess. Being short of $$$ actually helps things like that! ;D

AH, your blog is always a worthy read, Denny, and you never disappoint. Great narrative about this place, your family and your own history. A child of the sixties, myself, I understand, and appreciate that you take your sons and grandsons to the traditional places..

Congratulations on being sober for 21 years!!!