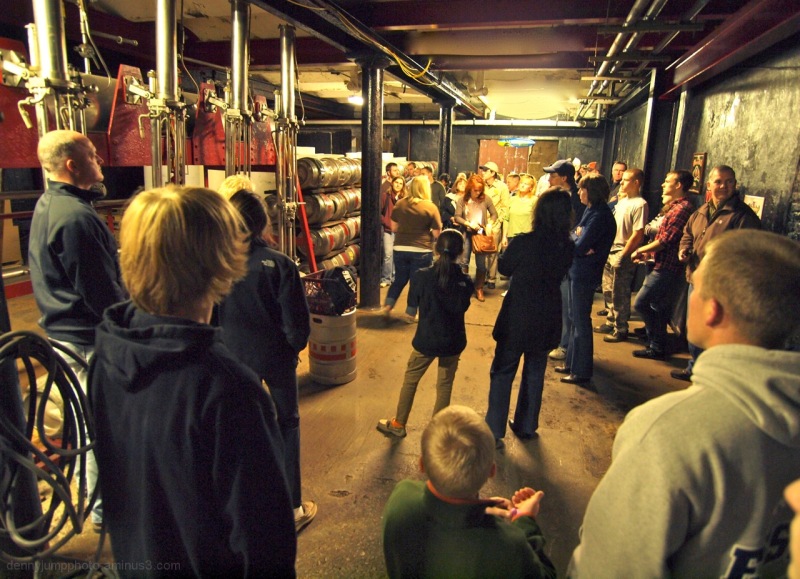 The German brewer David Gottlob Jüngling immigrated to the United States in 1823 from Aldingen, a suburb of Stuttgart, in the Kingdom of Württemberg. He anglicized his surname from Jüngling to Yuengling and began the "Eagle Brewery" on Center Street in Pottsville in 1829. His eldest son, David, Jr., left the Eagle Brewery to establish the James River Steam Brewery along the James River in Richmond, Virginia. The first brewery burned down in an 1831 fire and the company relocated to W. Mahantongo Street at 5th Street, its current location. The Eagle Brewery changed its name to "D. G. Yuengling and Son" in 1873 after Frederick Yuengling joined his father David in running the company. Although the company's name changed, the bald eagle remained the company's emblem. During the late 19th century, breweries were also opened in Saratoga, New York City, and Trail, British Columbia, although they were eventually merged with the Pottsville plant.

Here we are seen in one of the old Keg filling rooms which is now simply used as a gathering area to explain this process to tour groups. But this was the original room where these functions took place. This was essentially the first stop on the tour following the brief introduction upstairs. The old brewery that we saw in yesterday's shot sits alongside a mountain and many parts of the brewery actually go right into the mountain. We shall see a bit more of that in a few days.

good shot
have a lovely day

@Shaahin Bahremand: Hi and thank you very much ;-)

@Christine: Thanks Christine - I forgot to mention that the tour leader is the lady in the brown shirt and her back to the camera. I will elaborate more for everyone tomorrow but many of the family members start out woorking in the gift shop and act as tour guides as time goes on. Truly a family operation and yet they are not snooty at all - at least the ones I encountered..All my best, dear friend :-)

what a cool documentary, doug, so sharp and with good light despite the less than perfect conditions! must be an interesting place to visit ... and to sample their products (not for you, i know, but for me ... ;-))

It must have been a very interesting visit.. Nicely photographed Denny ! Have a wonderful weekend, hugs :)

Excellent point of view, Denny - and fascinating that the brewery extends into the mountain!

Ahhh, now it's getting real interesting! We are inside and I really like the point of view here, as though I am standing there... craving one beer. :-)

@Rick: Feel the foam man, feel the foam! I loved it years ago when I tried it but I think it is only better now...son-in-law and son really liked it! Franz likes it and he's Austrian....what more expert opinion do we need ;-)

Great lighting and soft shadows -- nice atmosphere. Great information too, I look forward to your future posts of the brewery built into the mountain :)

A fine shot of this old brewery's interior.

@Steve Rice: Thanks very much Steve ;-)

@Richard: Thanks Very much, Richard....I had been using David's Olympus E-600 while my little E510 was in the shop. Iwas really happy with how Dave's camera handled the conditions, but i am confident that mine could do equally well, now that I have an idea what my settings should be.......all this while I wait another year, probably, to gather up enough sheckles for a "real" camera (read nikon).

Wow, Denny. I have so much respect that you could make that wise decision (yesterday's post) and stick to it. Congrats for that, my friend. I know others who should do the same, but can't seem to manage it.

A great post with warm light and color. It really highlights the blondes in this photo. ;-) Interesting info that you provided as well.

Nice light for this shot with everyone's attention on the one explaining the process.
Is this anything like Hershey, where you smell the product all through the tour? ;D

You really get a sense of place in this shot...Makes me want to visit check it out.

Fascinating info here to flesh out the image and the fascinating visit. I have to smile at "He anglicized his surname from Jüngling to Yuengling" . . I'd thought from the new name he was from China ! But, there again, I don't drink beer.