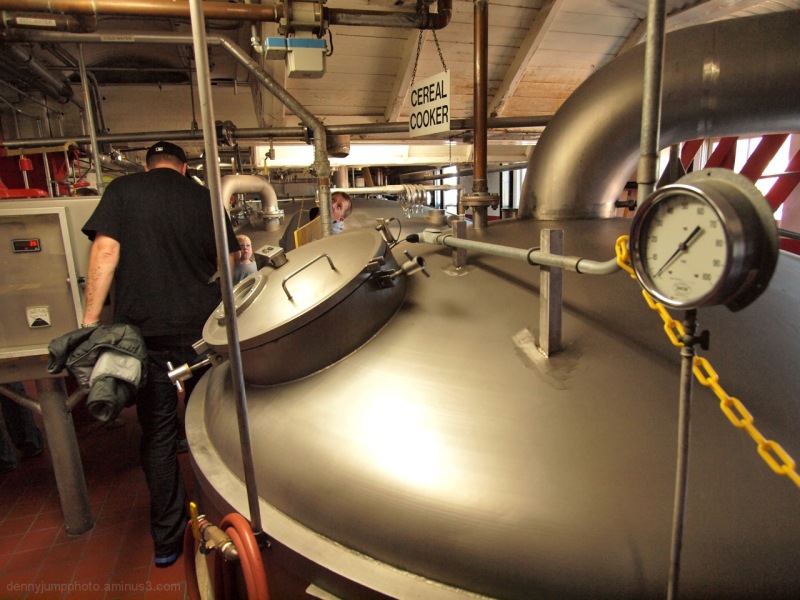 During the United States' Prohibition years from 1929 to 1933, Yuengling survived by producing other products ranging from "Near Beer" to Ice Cream. When it became clear that prohibition would be ended, the Brewery produced and delivered a truckload of lager to the White House which was then occupied by President Franklin Delano Roosevelt. The beer was delivered on the very day that Prohibition was repealed, an interesting point to observe, since Yuengling's lager beer requires three weeks to produce and age :-).

Here we see my son David (and son-in-law Steve peeking out) inspecting the grain tanks which process and cook the vitally important grains for the beer. Incidentally, the hops come all the way from Yakima, Washington - a well-renowned region for hops growing. After cooking, the "leftover" cereal is provided to local farmers who use it for everything from feeding their livestock (a happy bunch of cows, pigs, and horses) to fertilizing their fields (happy crops as well)!

In my opinion, Yuengling is a very distinctive and distinguished operation. When the demand for their product exceeded their ability to produce, rather than taking the chance of jeopardizing quality, they reduced their distribution territory so that they could retain that quality in their product. Sort of an American version of the UK's Morgan Automobile company, in my opinion.

I am always impressed by the cleanliness of breweries.

@Nigel: I quite agree -Thanks so much, Nigel!

Excellent point of view and great close up of the tank. The ice cream flavours must have been interesting during prohibition!

@Stephen: Oh it is a new tank and actually the ice cream was made in a building (Now empty) across the street - so no interferences :-) Thanks very much Stephen...

I'm enjoying this series, Denny, having never been inside a brewery. I think I must have a taste of this Yuengling beer. ;D

A fine shot in the plant and most interesting detail about the operation. Very nice post.

this is a very good series, denny, with cool pictures and very interesting info! this image here excels with its tones of copper or brass or whatever metal they use for their vats and pipes ... creates a very attractive mood!
interesting story about the white house ... i'd call it "perfect planning" or "advance vision"!
have a great sunday!

Nice shot, I like your description and comparison to Morgan and not sacrificing quality at the behest of quantity

Great golden tones.
There is the great feeling of being in a real human sized factory .
That is good.

A great shot of this cooking operation, Denny. I saw something similar to this back in the days of the Olympia Brewery in Tumwater.

Denny, Thats the beer of choice after the weekly hockey game. One of my favorites. Love there beers.

Are they looking for a speck of dust!

I like this one a lot, super angle & effect ! Hope you are fine *

Sure does look like they take a justified pride in their product here . . and a fascinating history, too !