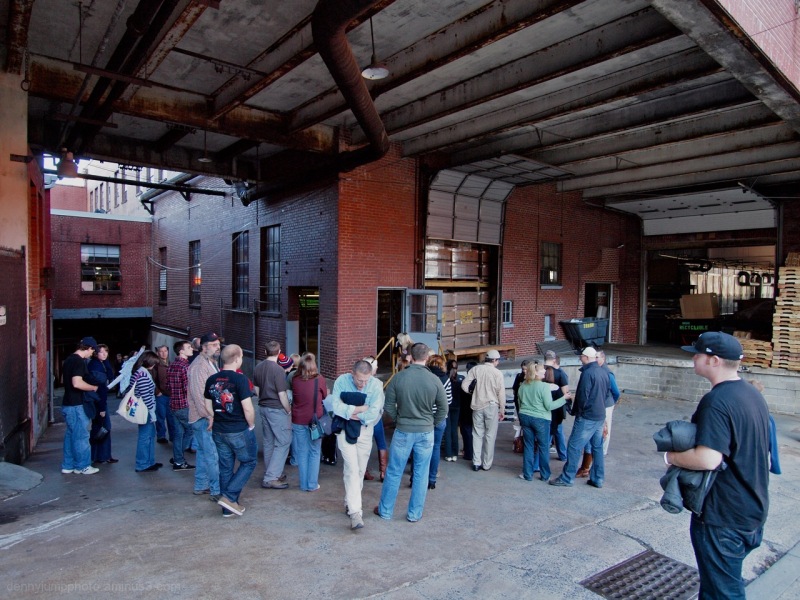 Here we are, out of the cave, cooking room and other areas, now getting ready to enter the bottling and canning facility (the smaller doorway just at the facing corner in center-frame). The various products are scheduled via computer. On any particualr day, a pre-determined specific product is sent through the feeders filling bottles and cans. Unfortunately, the bottling facility, due to health considerations, was a very quick look but it was still quite interesting. More on that tomorrow.

Here is a Listing and description of the various Beers that Yuengling Produces:

"Lager" is the company's flagship beer, and what is received if a "lager" is ordered throughout many parts of Pennsylvania, New Jersey and Delaware. It is usually sold in green bottles prominently featuring the word "LAGER" on the label but, is also available in cans, and brown quart bottles as well as 22 ounce bottles (colloquially known as "bombers"), now discontinued and replaced with 24 ounce cans. Yuengling Lager is 4.4 percent ABV.

"Light Lager" is a lower-calorie version of the Traditional Lager.

"Yuengling Premium Light Beer" is a lower-calorie version of the Premium Beer.

"Dark-Brewed Porter" has a very dark cola color, appearing almost black in the glass with a pale tan head, and has a strong malt flavor. Rather than using the traditional top-fermenting ale yeasts used in most porters, Yuengling's porter is bottom-fermented; few mainstream breweries produce this style. Originally known as "Pottsville Porter," this beer is notable for being one of the few porters commercially available from the late 1960s to the early 1980s.

"Lord Chesterfield Ale" Named for Philip Stanhope, 4th Earl of Chesterfield, this is Yuengling's hoppiest beer and only true ale. Like the Traditional Lager, it is usually sold in green bottles (but also in cans) and has an element of corn in its profile. It is very carbonated and tends to sprout a large but short-lived head when poured. As of 2007, Lord Chesterfield is no longer sold in kegs. However, quarter kegs were put back on the market in October 2008.

"Yuengling Bock,"
Introduced in February, 2009, is a return of a discontinued beer last brewed in 1970s. According to company sources, it will be sold as a draught-only, spring seasonal beer. Due to its popularity, Yuengling Bock beer was made available for kegs and cases in January 2010.

"Yuengling Octoberfest"
Was produced for the 2011 Octoberfest season.
But is not being produced now.

Great feel for the scale of the place and the intensity of working here . . for a moment, I thought those blue-jeans had been handed out to wear for the Inspection !

@Ronnie 2¢: You are a valiant man to "stick with" this series,which has definitely taken on the status of a "long day's journey into night!" Alas, a few more days and the misery will be through. I really had to chuckle at your very correct comment about the blue jeans. It seems that blue jeans have definitely become the standard uniform pant for Americans. I must admit, I love them too. They are comfortable and casual (like me) and durable (not like me)...But it is a very funny sight when looking at a large group such as this one....A GREAT comment sir :-)....Also,thank you so much for staying with this long series that is SO very exciting! Just a few more days....

I like the high angle you get here, Denny. Very informative series as well.

@Stephen: Thanks so much Stephen - It has turned into a very long one - sorry...Just a few more days :-)

I will have a lager light please, laughed at Ronnies comment :)

@Christine: After suffering through my series, here, one would need a few lagers...more to that point tomorrow....Thanks Christine! :-)

Fascinating history Denny, but give me a pint or two of real ale rather than lager any day !

Great tourist shot, and great detailed information for the series.

Nice shot. Looks like a great place for a tour.

Quite a large-scale operation when that many different kinds of beers are produced here! Great lighting and colors captured here.

You are doing a rock solid job of being a blogger tour guide for this brewery, Denny!

I didn't realize that they made so many kinds. Great information and an interesting place to tour!

Wow, that is quite an array of different brews. Nice education you have given us, Denny.

We really need to hunt up this beer to try ... we don't drink much of it so it will be a search. ;D

Well, I'd like to taste the porter. I prefer dark beers.