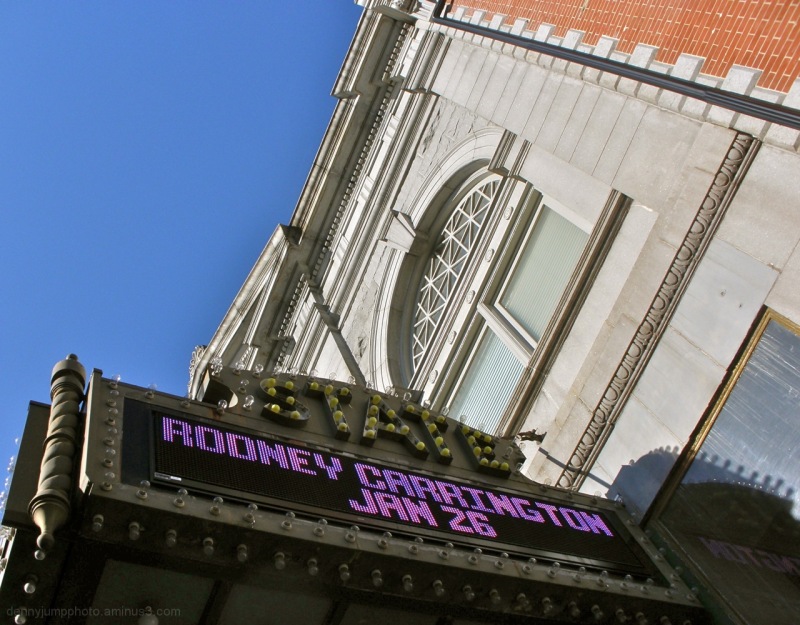 Here is another installment (Finally) into my extremely sporadic series on famous or historic buildings in the Easton, PA Area:

This is the State Theater in Easton, Pennsylvania. Built in 1926, it began by hosting vaudeville acts for many, many years and has run pretty much on a steady basis ever since with all sorts of entertainment including movies of course for a long period of time. The main theater has 1,000 seats on the main floor and 500 in the balcony. It has the accoustics and the history to survive and has become a very popular venue.

The "streetfront ambiance" is, to say the least, a bit dreary (no offense intended) as Easton has not exactly been a "ritzy, uptown" kind of place. But magnificent strides recently are being made in that regard, with museums and artist galleries around now (or being planned) and all sorts of historical features. In the city's defense, and by comparison, the outdoor ambiance at San Francisco's Great American Music Hall is smack in the middle of the Tenderloin District on O'Farrell Street, yet that fine venue has hosted it's own amazing share of stars down through the years. All of this simply proves the point that one can not (and should not) judge a theater by its streetside appearance.

Fans - and, more importantly, artists - seem to really love this place. And they love to return, as well.

A short list of performers whom The state Theater has hosted goes as follows:

The Moody Blues (I just heard they are coming back),
Chuck Berry,
David Crosby and Graham Nash (they have been here a few times),
B.B. King,
John Lee Hooker when he was alive, God Rest his wonderful Soul,
Darius Rucker,
The Beach Boys,
comedians Lewis Black and Rodney Carrington (as you see here),
AND.....Coming June 26 will be Ringo Starr and his All Starr Band for a return visit.

And an extremely long list of other very recognizable names I assure you - So, Well, you get the idea.

This looks a great theatre, enjoyed the interesting information too

Great POV, Mr J. As usual, your info a go go is terrific!

Fantastic pov ! And all these big names.... a very interesting place for sure ! Have a wonderful weekend Denny, all the best :)

Places like that seem to retain the echoes of the past so well . . I guess that's one reason folks keep coming back.

Love your pov in this shot Denny! Well done! ;-)

A cool shot of this old theater. I like the way you composed this.

three cheers for the place, denny, and five * for you for (a) this captivating perspective of this legendary building and (b) your interesting and enlightening explanation that goes with it! how heartwarming to know that not all that's older than 50 years must come down ... (including us, of course!) ;-))

Good choice of angle to give it the ritzy glitzy sort of feel that you feel the town is missing :-)

Impressive list of legendary artists !
That's the mark of the great venues.

Excellent POV Denny! I'm sure you and Barbara have spent a lot of time there.

Terrific perspective & description of this venerable old "house" As one who spent many years working in theatre it makes my heart soar to hear that some of these old venues are still used & loved. Thanks for making my day.

A wonderful jaunty angle to go along with those vibrant 20s years of this lovely old building's entrance into history. I look forward to more, buddy.

Lots of memories and a wonderful PoV ... a great image!

Wow Denny-does your neck hurt? :) Looks like a cool place!