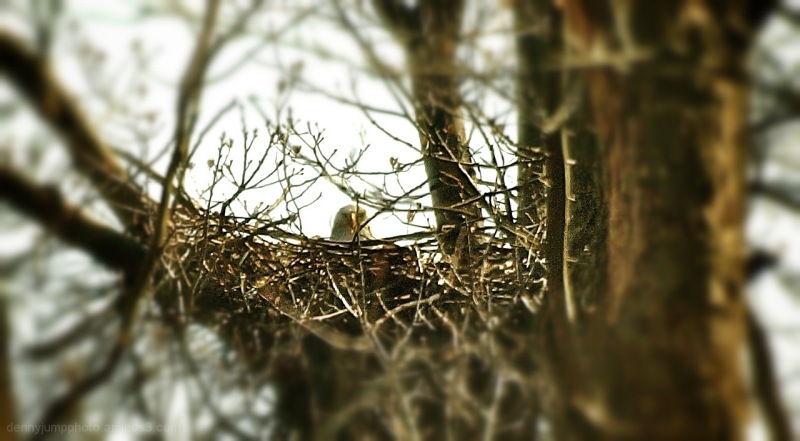 Several years ago, a few Bald Eagles took up residence at Merrill Creek Reservoir. They are cherished by the naturalists at MCR and just about enyone else after getting a glimpse of these beautiful creatures. Here, we see an eagle in the nest which, very likely, has eggs to be hatched.

I fired off, probably, 25 shots of this eagle, but this capture was one of the few where he was actually looking straight towards us! I stretched my poor beloved little Olympus E-510 dslr (and the 70-300mm Olympus Zuiko lens I was using) to the limit on this shot, manually adjusting all the settings as best I could in order to get a clear, lit, decent capture. The eagle seen here was easily 80 yards (around 87 Meters). After zooming the lens "on site", then, cropping and processing at home (as carefully as I could to wipe out the noise and distractive branches), I came up with this version. If I had cropped this any more, we probably would have been able to count the pixels in the image!! ;-) So I hope you like this one as it is :-)

Well, that is so cool - nicely done, Denny!

@MissT: Hi MissT- Thank you very much ;-) SOrry I have missed you alot lately..crazy right now...

I love the focus on the net and how the bird slowy emerges to our vision.

He has a better better visual acuteness than us with our telephoto lenses !

You did right well getting this from what you say. And, in a way, there's more sense of achievement than if y'd been carrying $1m of photo-kit. One thing's for sure - the eagle saw you and likely logged the serial number off that E-510 !

@Ronnie 2¢: Thank you Ronnie2...And you are so right about the serial number documentation into his brain. Thanks for making my day ;-)

Very cool shot, Denny - I've longed for a shot of a Bald Eagle but have yet to get one. I love how it's looking at you through the growth, and the blur vignetting really helps focus the eye. Well done!

@Jason Politte: Well this one definitely beats the only other shot I have of a bald eagl,e which I captured lying flat on my back lying on the grass in my wife's family house in Seattle, as I tried to "shoot" a bald eagle soaring about 90,000,000 feet in the air above the house...-Thanks Jason ;-)

A superb capture with terrific processing to bring the focus on your subject.

@Williams: Thank you so much Paul - Most appreciated..

Your efforts paid off in a cool natural setting shot, Denny. I also like how the spot focus has a sort of egg-like shape, which is highly appropriate to the setting :-)

@Rick: Well it won't make "The Audubon" but we were there and sharing the view with two other hikers who were lovin' it, like we were, and we all talked about British Columbia and Eagles and Washington State and Eagles etc etc..(They were from New Jersey, BTW) ...and I just kept firing away - what the hell..Thanks buddy ;-)

A wonderful capture under the circumstances Denny! Well done! ;-)

@Eric Cousineau: Hi Eric - Tjhank you very much sir - it was not a great shot by any stretch but we were pretty excited...;-) Thanks sir

I have never seen one (except in a zoo of course). They are so proud and elegant ! Great image for such difficult circumstances : 300mm + important crop ! You did great ! Many many hugs to you Denny, and as I said in my reply to your comment, I will send you all my positive waves for the weeks to come !!! All the best :)

Thanks for pointing it out, it's a great image indeed ! All the best my friend :)

Great capture! Taking all those shots really paid off. He is looking right into the camera!

@Elaine Hancock: Thanks very much Elaine - nice thing about this time of the year is that the trees have no leaves so the nests are easy tos ee..later, this nest will be darn near impossible for those who are not aware of it's location. Thanks again - all the best ;-)

I like this very much! It must be a thrilling experience to face such a wonderfull creature. It is one of my favourite animals, to me it's a symbol of freedom and power. Like the eagle flys over the mountains, our soul must exceed the daily problems so we become able to see the pattern of life.
Thanks for sharing this photo.

@christine: You are so right, Christine - I quite agree with you about the beautiful eagle and his "image" among all of us :-) Thank you very much for your very kind comment :-)

very well done, denny - that bird had no idea we would be looking at it so closely !!

@franz: Thanks very much Franz...I'm not sure though, as Ronnie2 so rightly stated, he probably saw the serial number on my camera :-) - Love that photo of yours today - just wonderful!

How cool is that to actually see an eagle in the wild. Any shot of that is a good shot in my book!

@B. Thomas: You are too kind - thanks Barbara!

Wow, fantastic find and capture Denny. There are rumors that there is a pair of bald eagles living in a nest on Peshe Island, a uninhabited Canadian island about 1 mile off of Detroit's sores, a place where I frequently kayak, but I have never had the pleasure of seeing the eagles.

@Ralph Jones: Thanks very much, Ralph...I have really enjoyed your series on the Red demon being driven from Detroit and teh entire history of it - I was never aware of that ;-) Thanks again sir ;-)

What a wonderful sighting ... and capture, Denny. I'm watching the Decorah eagles in Iowa and this is nearly as good a shot! Bravo!

@Judy aka L@dybug: Thanks very much, Judy ;-) I really appreciate your kindness here :-)

In the nest-so cool for you!

@Julie L. Brown: Yah we had just happened to meet up with another hiking pair who were wondering where the nest was (we were in the portion of the preserve that had signs posted on trees about not going off the trail because this was the Eagles' nest area) and as we stoipped to talk I looked up and there was the nest - Barbara actually identified it first - I did not see the eagle IN the nest until I looked at it through my lens..I have some "head profile" shots too...The whole thing was pretty damn cool ;-)

An amazing image, one that I for sure am envious of. A 5 star image Denny.

Whoa! So cool to have seen this in the wild! We don't see them here, so what a treat! Thank you so much for the lovely comments today, Denny!

Great work Denny. I know what you mean about the limits of the 70-300mm lens. I'm using one on my full frame Canon 5D and I'm always wishing I could get a little closer, but as you know, the price skyrockets on anything bigger.

Yes, you've done a great job with this one Denny.

What an amazing bird -- and nest, too.