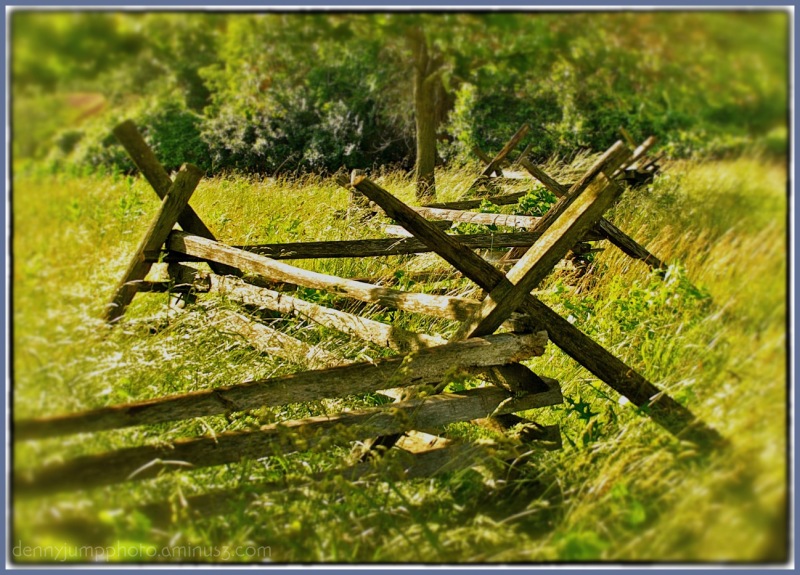 From Valley Forge, Pennsylvania, here is "A Fence for Richard."
For Richard, with whom I am so proud to share friendship!
PS -The day I took this shot, it was blowin' a gale!!

This is what is known as a "Split Rail" Fence.

Here is some information about this style of fence from Wikipedia:

"A split-rail fence or log fence is a type of fence constructed out of timber logs, usually split lengthwise into rails and typically used for agricultural or decorative fencing. Such fences require much more timber than other types of fences, and so are generally only common in areas where wood is abundant. However, they are very simple in their construction, and can be assembled with few tools even on hard or rocky ground. They also can be built without using any nails or other hardware; such hardware was often scarce in frontier areas. They are particularly popular in very rocky areas where post hole digging is almost impossible.They can even be partially or wholly disassembled if the fence needs to be moved or the wood becomes more useful for other purposes. During the American Civil War, these split rail fences were a major source of firewood for both the Union and Confederate armies.

The distance between either the zigs or the zags is generally 16.5 feet (5 m) or one rod. The area of a field can therefore be calculated by counting zigs or zags along the side and end of the field: one hundred sixty square rods is 1-acre (0.40 ha).

Split rail fences were made of easy to split, rot-resistant wood. Traditionally American chestnut was the timber of choice until chestnut blight eliminated this tree. Currently, most split rails are made from cedar.[clarification needed] Whether of chestnut or cedar, these logs were cut to a length of 10 to 12 feet (3.0 to 3.7 m) and split down the length of the log. Each half was then split into quarters, then eighths and so on until the rails were of a usable size. A log may produce from four rails from an 8-inch (20 cm) log to over a dozen from larger logs. The rails are stacked on top of one another. Most split rail fences have the rails stacked in an interlocking zig-zag fashion that is self-supporting, easy to create, easy to repair, and easy to disassemble.

Some timber fences have the rails stacked directly on top of each other and secured with double fence posts (one on either side of the rails). This made a more permanent and compact fence but remained easy to repair."

Beautiful colors and a great job of processing.

A zig zag fence !
Original.
I like the brightness in this picture.

@Gérard Beullac: They have them a lot in the states - I posted some more information about them on the page for today - Thanks Gerard :-)

Now that's what I call a fence! I agree with Christine on all counts. Any idea why they build them like that? Thanks Denny!!

@Richard: Hi Richard - Glad you liked it - If yu have a moment to go back to my page, I have inserted an explanatory piece about these fences which, I should have noted, seem to have been primarily used on teh American continent for all sorts of reasons. Rather interesting I thought. We had a "straihjt" split rail fence in our San Diego house and I always liked it :-) Cheers djt

Beautiful lines and tones. Have a nice day.

@Leigh: Thanks very much Leigh! ALl the best :-)

@Jason Politte: Thanks very much sir. I love them too :-)

What a very special fence ! Excellent composition Denny, I also like these refreshing green tones...
Have a lovely day hugs :)

@Tamara: Thank you Tamara - the wind was really blowing the grass so the blurred edges that I employed during processing actually gave it a better effect - thanks and hugs Tamara :-)

A pleasing shot with effective vignette touches to give almost a nostalgic feel... I love these types of fences and miss seeing them, being a city guy nowadays. We have 'em in Ontario around the farmlands here and there. Excellent post.

@Rick: I really like these fences..see them out west a lot but aroud here too....Thanks so much, Rick :-)

A great PoV chosen here which illustrates the "zig" and "zag" wonderfully! I never knew that there was any logic on the rail lengths. That's interesting to learn. The vignetting adds a dreamy feel to this compo.

@Steven: Thanks very much, Steven I always loved to lok at these fences and figured that there HAD to be some logic behind them..it was cool to read that piece in Wikipedia about the distance between zigs and zags - Thanks again :-0

brilliant, denny! i love these traditional fences and the way they zig-zag across the country! interesting and comprehensive info, too!!

and now i completely forgot to praise the wonderful presentation with the very effective selective softening !!!

An excellent shot, Denny. Your processing is first rate. Great information, too. With our vast forests, back in the day, wood was plentiful and these fences made a lot of sense.

@Steve Rice: Wow, thanks you VERY much, Steve! I really enjoyed learning from the wiki piece as well :-) All the best sir!

@Eric Cousineau: Thanks very much Mr C! I do appreciate it - I liked the look as well - the wind and it's affect on the grasses seemed to work real well with the blurring and bright vignette I added :-) Thanks again...

@Aniya: Hi Aniya- Thanks so much for your kind comment :-)

Wonderful capture and beautiful colors in the field grass; these fences are very attractive ~ a great historic place and photo! Like this alot Denny :)

@RBL: Hey Ruthie - Thanks very much to youas well :-) You are putting up some great stuff as always :-)

@john4jack: A Painter's Thank You, sir!!

Beautiful fence. I love the grasses that are blowing! Fantastic information!

I must keep a watch for any zigs and zags out there today - clearly, I am in dire need of the messages they carry.

I love shots that not only are beautiful and show me countryside that I love, but that also teach me something I don't know, like how to measure the lay of the land. Great post.

Oh, how we love these fences ... Natchez Trace and lots of places in Virginia immediately come to mind. This is a wonderful capture, Denny, and the light was certainly in your favor too!