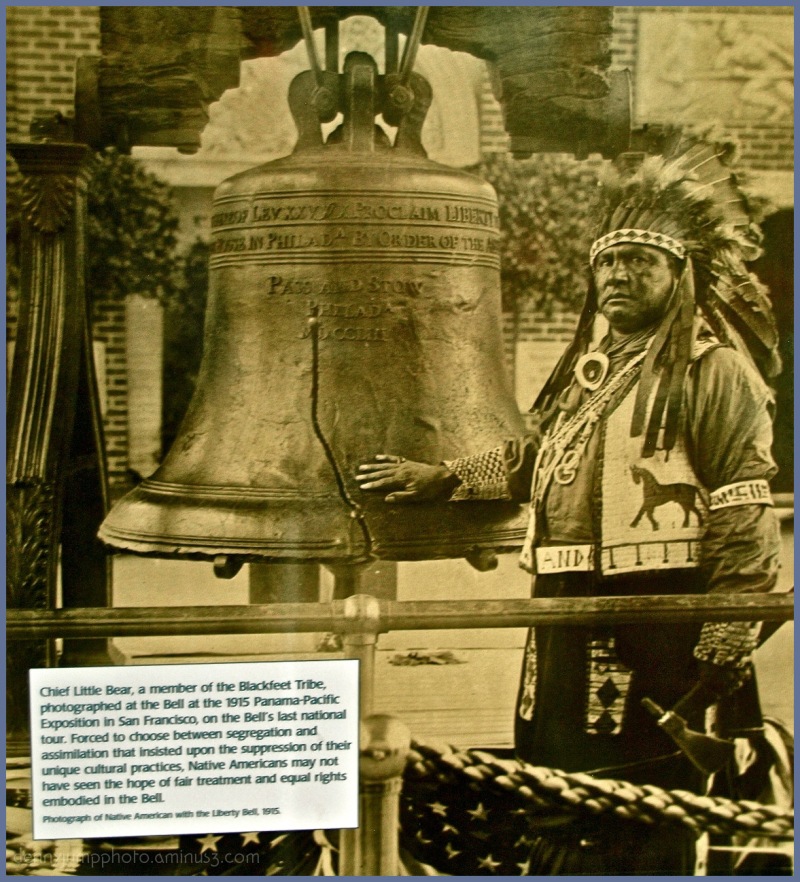 Liberty and Justice for All? I Don't Think So!

The Liberty Bell was owned by the City of Philadelphia in the early 20th century, but was loaned to the National Park Service for several years so that it could be carried around the country by train for expositions.

Please forgive the bad focus on the sign there, but this is Chief Little Bear of the Blackfoot Nation (parts of Idaho, Montana, and Wyoming, mostly) in 1915, as he visited the bell on exhibit, in San Francisco, and posed obviously at the request of a stereotype-addicted "documentor."

Now, I don't wish to offend anyone here, but, in my opinion, This country's government has never provided, protected, assured, or fully carried-out any sincere attempts, at all, to "make whole" in order to undo the cultural, physical, social, and mental damages that have been cast upon Native Americans since "Day 1!". I have always seen this fact as nothing less than a travesty. A disastrous and despicable travesty, carried out against those who truly and unarguably were here first and rightly bear the distinction of being the First Americans! Obviously, (to use modern vernacular) someone did NOT "get the memo!".....And they STILL have not gotten the memo!......'Just sayin'."

It's the same story wherever you go. People inevitably try and justify their stance and their particular set of actions. Ultimately the problems are just to large to be solved. Sad but true.

I agree with your POV Denny... Nothing to add. The expression of the Chief Little Bear is a little strange on the photo. A very intresting post, thanks for sharing ! Have a lovely weekend, hugs :)

'There can never be justice on stolen land' - KRS One.

That's the main truth, as points Ralph, thanks to the quote of KRS One.
Hundred of tribes, all over the world witness the fact is still existing.

Oh Denny ... you touched a very tender spot for Mike and me with this image and your text. Mike's grandmother was one-half Indian, orphaned at three when her Indian mother died (white father long gone from the scene). She was raised by a Quaker family and took their name, so sadly we have no records. Even more sad is that the family did not know of her Indian heritage until the time of her death in the 40's, because being a "half-blooded" American was shameful in society in the 20's & 30's. What a crime!

On a happier note, on our way home from Alaska in 1999, we were assisted at the foot of Chief Mtn. in Montana, by Jack Gladstone, spokesman for the Blackfeet Nation, when we had engine problems. He is the most wonderful person and you can check him out on his website. Be sure to listen to his music!

@Judy aka L@dybug: Thank you very much, Judy. A touching story of Mike's Grandmother and I appreciate and am honored by the fact that you shared it with me. And thent he story about Gladstone. That was wonderful -I will definitely check him out - he sounds familiar. Sometimes I get carried away with my soapbox diatribes, but there are some things that just make me emotional. And hatred is one of them. But we could go on forever (and I usually do :-) so I won;t do that - will just say again, Thank You and may God Bless the memory of Mike's mom and we can know that she has found her elders and heritage again. Wishing you both all the best - thanks again for these stories....I am always afraid that I am really going to incense someone one of these days :-) <3 dj

somehow i missed this exhibit or i passed by without paying attention ... too bad, because it is terrific on several levels, one being the cynical contradiction regarding the notion of "liberty". never a good idea to insist on ONE interpretation, is it? moreover, i wouldn't mind too much about 'incensing' someone with the truth ... (though once again, 'what's one man's truth is another man's lie', or as a wise man once said, 'truth is the daughter of the times' ... ;-))
have a lovely and peaceful weekend, sir !!

@franz: I just don't like to offend people I like (and I like everyone here on AM3 :-) . But on the other hand, this is our only place to do these so I did it. Franz, thank you SO much for your very wonderful words and comments even if we were not to agree on some poit, I know that the respect would remain. You are the best! Have a great weekend yourself - I am cleaning house for the returning Mrs J :-) Cheers, love and hugs to you sir!

Amen to what you say, Denny. Thanks for sharing.

And nothing has changed. What an interesting picture.

@Elaine Hancock: Thanks Elaine - Hope you are ok dear. BTW I will "lighten-up" tomorrow's post. I can only be srious for a short time - it gets too stressful :-)

I hope you know now, that we will never be incensed by talk of the Indians being mistreated! ;D

Such a powerful photograph!

not everyone got the memo