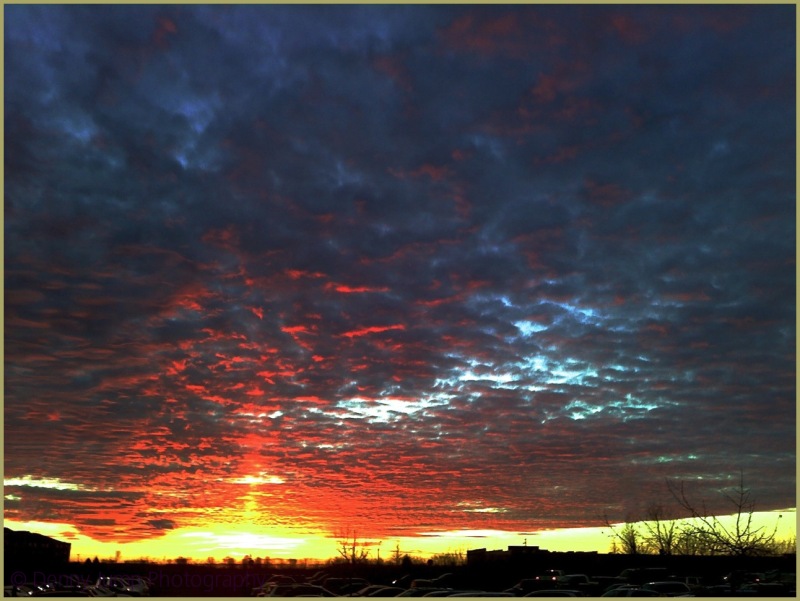 The Story of a Killer Sunset from a Shopping Mall

So, there we were, in a local shopping center, browsing through a "Pier One Imports" store. We had just enjoyed a late afternoon coffee (for me) and tea (for Barbara) and cookie (for both) at the "Barnes & Noble Bookstore" next door. As we walked over to the "Pier One," I told Barbara, "It's going to be Killer sunset!!"......I was right.... 20 minutes later the show began. And, of course, my E-510 was at home .....Arrgghh......(Note to self - How many times do you have to tell yourself: Do NOT leave home without throwing the camera into the car!!!!!) So, I had my cheap little LG Cell phone and I prayed as I shot, that one of the dozen shots I took would turn out halfway decent.....Never mind the fact that I had a parking lot full of cars, light towers, a Texas Roadhouse Steakhouse, and a Motel of some sort to shoot over or around as best I could. Then get home and see what the download gods give me. ....

So this is it, a bit of shadow relief and some cropping, some highlight editing and exposure adjustments, and I cloned out a few towers and headlights from oncoming cars....

But you know what, It was a definitely a killer sunset.

Your images and words together like this carry so much of the experience of the moment - an LG cellphone with a heart.

@Ronnie 2¢: Thank you Ronnie - It was a time of joyful frustration :-)

A fabulous sunset and as we know, the best camera is the one with you at the moment :)

@Christine: Thanks so much, Christine....still, I was "kicking myself" oh well...

Oh yes this was a must have shot and pretty good for a phone camera. Let that be a lesson though Denny always have the camera with you, mind you I often get, "why do you have to bring that with you everywhere we go" from Sara !

@Doug: Thanks Doug, yes Barbara always gets suspicious when I bring my camera..."Oh boy, he's going to be stopping every 2 minutes to take a shot, then another, then another....!"

Killer indeed! Always saying that to myself as well. Just when you think you don't need your camera - dammit you do! Great shot - and looks perfectly beautiful with the camera you used. It's the camera-person that makes the shot.

Yes a story most of us perfectly know.
And finally, these smart phones may be very helpful in these cases.
A definitive killer sunset.

@Gérard Beullac: Thank you Gerard...unfortunately my phone is not very smart and neither am I...but this did not turn ot too terrible, I guess :-) Thank you sir..

Wonderful - you did a good job with the phone

@Akbar&Armaghan: Hello and thank you...

The cell phone camera is not so bad if you leave the pictures in a small size but it does make you feel a shame !!
Beautiful killing sky !

@Veronique: Yes I do agree, Veronique Thank you so very much :-)

Wow! You did a great job with this image, Denny. Barbara must be so patient!

You're right - thats a fantastic sunset, Denny! That little LG did a pretty good job of it too, eh? :-)

@Jason Politte: Not too bad really - Thanks very much, Jason :-)

wonderful work, denny, and you're right of course, on two accounts - it IS a killer sunset, and NEVER leave the house without your camera! ;-)

@franz: No arguments on either count sir! Thank you so much Franz ..All the BEst <3

your right its a cracker and your treatment unnoticeable.

@Jules: Hi Jules - Thank you very much sir - I absolutely LOVED your Truman Beach images so far and I am certain that they will continue marvelously!! Thanks, sir :-)...

This is KILLER! I have said the same mantra to myself on several occasions "bring the D*%# camera!" But this just proves another theory: that the best camera is the one you have with you- and that little LG did a fantastic job with you at the helm!
Besides, sometimes the best moments in life are just the pure enjoyment of good company, coffee, a beautiful sunset, and a cookie....

@Tracy: Thank you so much, Tracy - and I agree about the best moments in life....I started this photography bug fairly late in life so I have no illusions - I ain't gonna be a master. I love it, but my TRUE love stands by me, has cookies and tea with me, and gives me hugs and kisses and smiles...and puts up with all my b.s. - I'll take that ANY time :-) Thanks Trace <3

My kinda killer, where no one gets killed ! Superb sky drama and beauty, and kudos to you and the LG !

Excellent little bottom cars' stripe to support this stunning sky coming towards us !

@destani: Hi and Thank you very much destani :-)

A wonderfully dramatic sunset shot Denny! Always make sure you have a camera with you before you leave home! ;-)

"You done good, kid." What a super sunset, and you managed to make it all the more memorable with your story.

Beautiful sunset and mood from your day ~ the coffee, tea and cookie sounds so delicious! Your cell phone & finishing is very effective! I actually keep forgetting my cell phone can take pictures ;->

@RBL: Wow talk about serendipity - I just sent you an email...Thanks Ruthie :-)

Thank goodness you had a camera with you to capture this beautiful sunset! Incredible colors and I love the low-lying clouds which create a "ceilling" in this sky.

Fantastic. Just beautiful. There was one of those here last night but I was not in a place to get a picture. This is gorgeous!

nice catch! the sunset looks magical indeed with the texture and colours of the clouds making for quire a show!

I'm glad that you didn't let not having your real camera at hand keep you from capturing a beautiful a moment!

That is a killer sunset if I ever saw one! Amazing!

And yes it was and you got it one way or another! Beautiful light and great processing work to complete the image Denny. It's great to hear from you and I'm glad you are doing well!

That was an outstanding sunset!

It certainly was the "killer" you predicted! Feb. 1 we ret'd home and went to collect the dog at her sitter's. I didn't take a camera and we had a gorgeous mackerel sky like this. We were tired after the six-hour bus ride back from Ft. Lauderdale, but as soon as I saw the way the sky was shaping up, I kicked myself. It got more and more delectable until the moment we pulled into our driveway and the 'lights went out'. Drats!