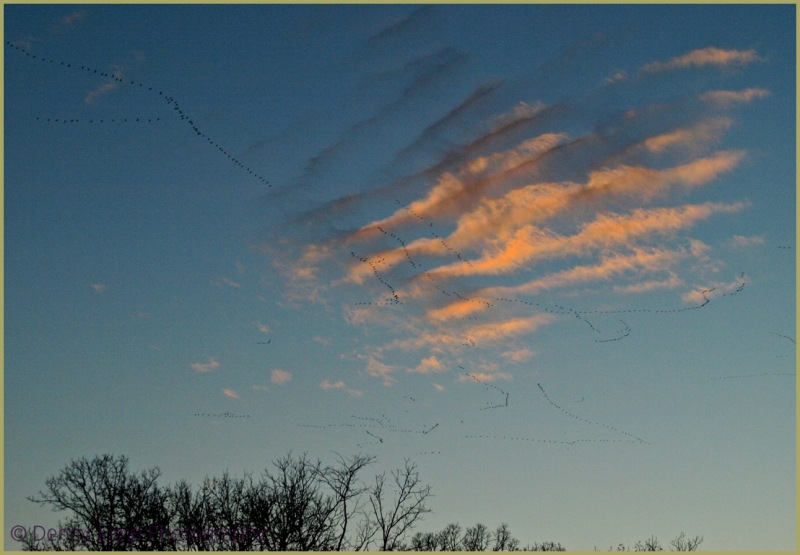 Snow Geese - Scribblers in the Sky

Well, after my post of Tuesday (which I I inadvertently allowed to "run" for an additional day on Wednesday), certain people were ready to have me sent to the nearest psychiatrist. Consequently, I figured, today, I would be best served posting something juuuust a bit more mundane. So here they are - Snow Geese!

To me, it is fairly easy to distinguish airborne Snow Geese from airborne Canada Geese. Canada Geese (or, as some folks call them "Canadian Geese") are larger and somewhat multi-coloured...and they fly in small, impeccable formations, that is, Classic 'V" shape formations .....and the other distinguishing factor about Canada Geese is that you do NOT want to be walking where they have been.

Conversely, Snow geese are smaller, they are white, except for black on the tips on their wings. And the most telling factor, to me, is the fact that they fly in absolutely MASSIVE flocks...seemingly thousands per group. And their "formations" are much less organized (to say the least) as they fly across the sky, their "formations" looking more like scribble marks on a chalkboard.

But either way, I absolutely LOVE to watch and hear geese as they fly overhead. The raucous honking, squeaking, and all the other joyful noises that they make - I just love it.

Barbara and I observed these wonderful Snowgeese flying high above us as we enjoyed a cold day's walk last week. I hope you like this.

Your image and dialogue make for a fascinating and enjoyable combination here . . a lovely posting, Denny.

A superb shot of the sky and all these geese up there.

I love the patterns they make in the sky! This is lovely!

Fabulous and very interesting info too

A very entertaining post, sir, and one hell of a fine shot of these many formations !

Wow, that's a lot of geese. I love the patterns they make in the sky. Great shot.

@B. Thomas: Sometimes when I look up and see the massive formations It makes think of an invasion of armies charging across some plain somewhere...Their formations are really evocative in that way.Thanks Barbara hope you had fun ;-)

It's fabulous, and you made me learn something new, today.
Thanks for that !

That is a lot of geese flying over. But what is most eye-catching is that gorgeous sky!

I always loved seeing these fly over when we lived in KY and Iowa. Part of the fun was also to listen for their distant honking sounds from way above.

What a huge flock that takes up the whole sky! Like Elaine, I love the title you've given this shot.

Wonderful capture ... they look like organized confetti in the sky! If confetti can be organized!

wow-cool shot! Would you believe that I have not seen snow geese, except once-and only from a distance?

"Scribblers" they certainly are ... this is beautiful, Denny!

Love the lines--both of the clouds and the birds.

This image has been featured in 2 Remix collections.

All creatures great or small... by Judy aka L@dybug

snow geese scribblers in the sky