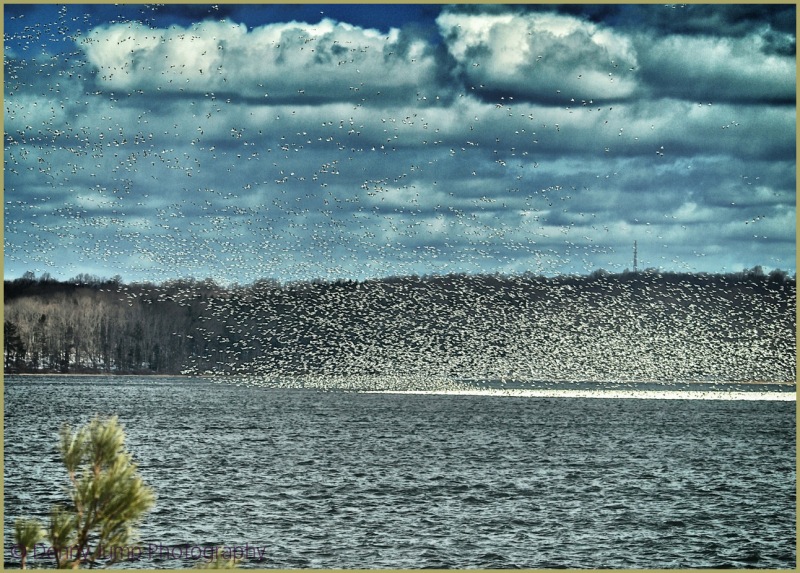 Ok I lied.....I know, I said yesterday's was the last Goose image for a while but, here's the "deal:" I worked late today-and even though I am off tomorrow (Friday) I have to get up early for a 0700 doctor's appointment-and I did not have any other ideas for posts-and it is way too doggone cold to go around looking for a shot even if I DID have time-and so I thought, "what the hell, throw up a shot after editing it in smapseed and throwing a little drama in it"-and I liked this one because it has some perspective with the tree there-and if you look REAL close, you can see geese almost entirely up into the sky! ......Whew! That is one long, run-on sentence (he said taking a deep breath)!" So, anyway, here is my Snapseed-processed (I used the Drama tool) Snowgoose image number four...or is it five?....I will try to find something actually different for the next post :-) Happy Weekend everyone!

Denny, I know you take the photographs but you must have a team of six writing these narratives . . no man could do it alone !

This really works, so glad you posted it :)

So glad you posted this
It's really capturing the mood
Have a wonderful weekend :-)

Crazy amounts of birds! I'm glad you posted this one, too, buddy.

Wow I love this, I'm glad you didn't have anything else to post to day we would have missed this otherwise. I hope the trip to the Doc's went ok Denny

Fantastic! Someday I want to see this! A very dramatic image! Hope the doctor went well and have a great weekend Denny!

Wonderfully dramatic shot Denny! I am glad you chose to post it! ;-)

I just cannot imagine this many birds taking flight. Great.

No problem! I love these photos of the Snow Geese.

absolutely no need for "justification" here, denny, as long as you provide us with spectacular images like this one! you don't run into thousands of geese every day now, do you?!? ;-)