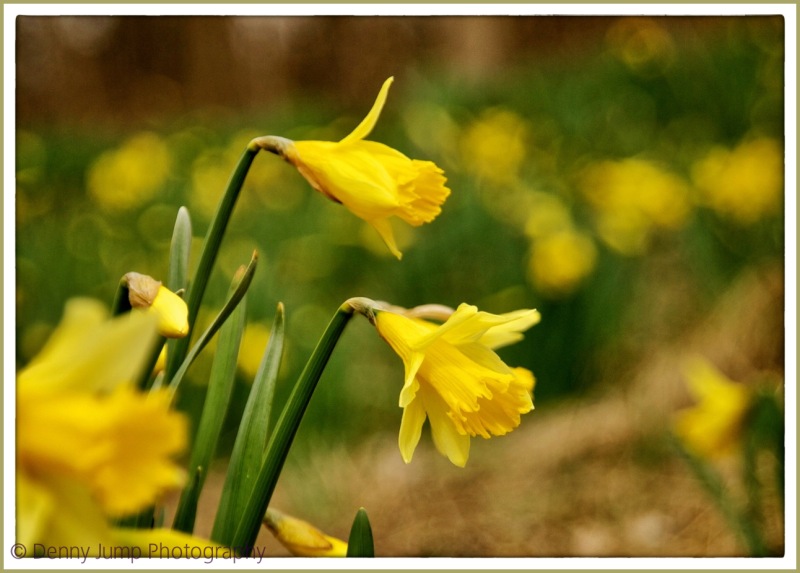 There is a small but secluded wood that spreads down a hillside near our house. This wooded hill is bordered on the west by a busy road. To the north lies an old run-down house and property; to the east is a "hodge-podge" of fields, waiting for the economy to turn so that more houses and condos can be built. Finally, to the south is another street that leads to our neighborhood. And so, stuck in the middle of all that is this little plot of woods and grass and hillside where the daffodils (and later, Grape Hycinth) grow in a very secluded and protected atmosphere - really unknown by anyone, I have learned.

So, here, in this protected zone, grow the daffodils, that seem to survive and pop up, despite the terrible cold and, basically, non-existent "springtime" this year! After passing by and succumbing to the urge to stop I was quite surprised late last week that, not only were the daffodils "up," but they were merrily flourishing. So, this is my smile zone. I hope you like it.

Daffodils seem to have so much 'presence' . . great communicators, I find.

@Ronnie 2¢: YEs they do, Ronnie - I agree...there is really something about them...I think it is the "trumpet-like appearance that they have - like the Daffodills in Disney's "Alice in Wonderland I guess!! Thanks Ronnie and Lilly <3

@Christine: I ALWAYS smile when I see YOUR work - Thanks dear friend :-)

Beautiful image Denny, so pleased you have discovered this wonderful place where the flowers of spring are defying the weather. I could just imaging walking there just to sit and take in the little bit of spring it offers, thanks for sharing

@Doug: Hi Doug - Thank you so much and thank YOU for that magnificent image today :-)

@CElliottUK: Hi Chris - Thank you so much! I realy loved your image today :-0

Super dof control here Denny to create a wonderful bokeh! Our flowers are still a couple of months away! ;-)

@Eric Cousineau: Thank you Eric - I know, this winter has been rediculous for everyone even us down here :-(

This is gorgeous, Denny ... what a treasure to find.
Thank you for sharing your smiles with us this morning.

@Judy aka L@dybug: Thanks so much, Judy - hope you are enjoying the warmth :-)

A gorgeous shot with great bokeh.

@Steve Rice: HI Steve - thank you so much//I think I kind of overdid the bokeh in Snapseed but oh well :-) Love those Seattle Center shots :-) Makes me homesick

Beautiful ! And such a great feel to know the image is from this Spring . It is snowing here , with crazy wind !

@Mariana Maoduš: Hi Mariana - Thank you very much...I am ready for spring but it is cold here too..

What a lovely, well written description honoring this golden light miracle. Love the interesting boka with seems to suggest spheres within it's texture.

@Joyce: Hi Joyce, thank you so much :-) I hope your Rocky Mountai spring arrives for you soon as well :-)

Beautiful! I so miss these signs of spring!

this "enchanted and secret" garden of yours sounds a lot like my "wilderness" along the creek ... let's hope they are around for a long time still !!
this is a gorgeous look at these pretty spring flowers! my wilderness was covered in three inches of snow this morning ... :-(

@franz: Thanks Franz - I hope to have some more Daffodil shots to share...you will all probably be sick of them byt the time I am done .Weather permitting, .Mrs J and I are planning on walking down there this weekend to take our spring photo of us in the flowers, for our Facebook page :-)

Beautiful, Denny! This reminds me of Daffodil Hill in Amador County. I was there a couple years ago and there were daffodils everywhere.

@Bill Brown: Thank you Bill - (Yes I got this one) ...and It sort of reminds me of Daffodil Hill too but it is not nearly as neat and clean- This scene here has weeds and bramble, dead and down wood all over the place here....My Mom used to go on those bus trips that theState Workers did from Sacramento to Daffodill Hill etc - she LOVED that stuff :-)

Beautiful! What a lovely secret place that you have! My daffodils are just starting to bloom. It has been so cold and windy! I wish it would just warm up a bit!

@Elaine Hancock: It has been rediculous hasn't it, Elaine? SO darn cold!! I was shocked to see these in this state...I have been going down there every year since we moved here and I checked it out the other day thinking :nah, they won't be out yet, not THIS year...but there they were.....BTW I have NEVER seen anyone else go in there yet it is so accessible...You really can't tell that they are there from the road unles you know to look for them - so that is a big plus for this wannabe Photogrpher of Easton, PA LOVE LOVE LOVE your birds on the fence today - I can hear Judy COllins singing ...

@john4jack: Hi Jack - Yes I remember how prolific they were in Oregon AND Washington...I miss that and the tulips too :-) Hope you and Ellie are doing well :-)

I love this color!

@Julie L. Brown: Thanks Julie :-) It's like Lemon Merangue Pie without the merangue :-) Hope you are doing well :-)

It's heavenly. The color and dof and the fact that they defy winter and push their little selves into the light and shine for all to see. The perfect smile zone! How could you not?

Love the bokeh in this image...almost impressionistic.

Beautiful image with that sweet shimmery background as well.

cold all around yet