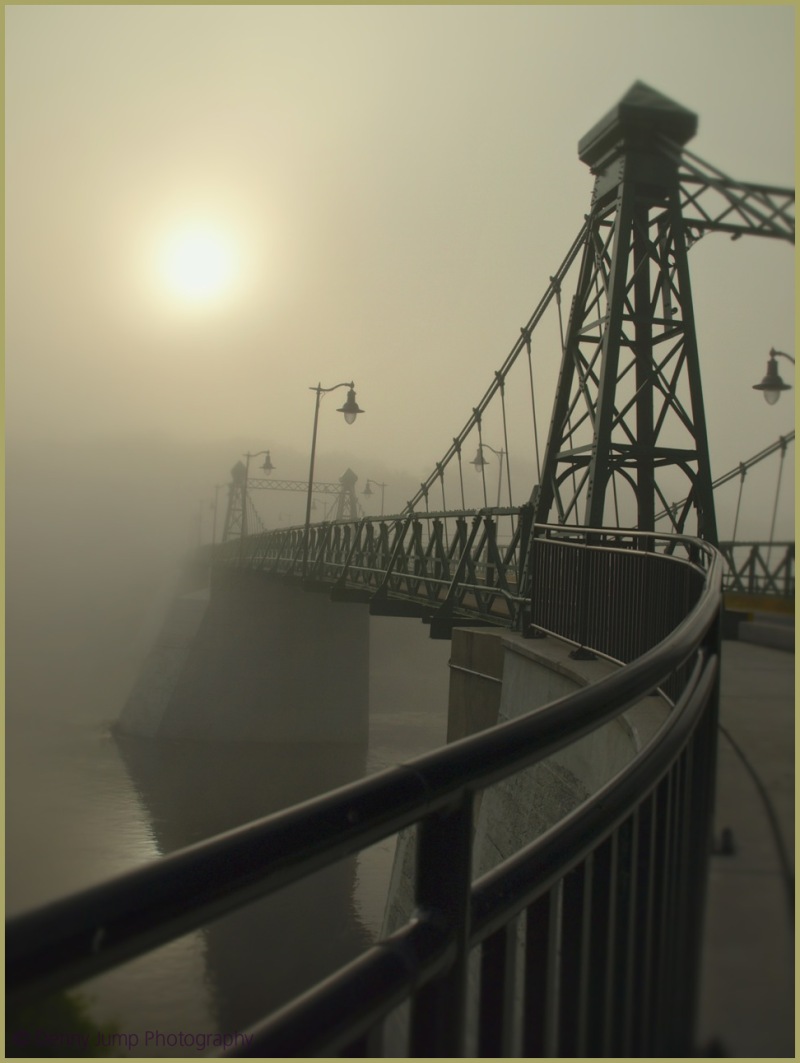 Thursday morning, 20 June 2013. Traffic and construction problems forced me to do something I had not done for a long time: Take one of my less -used alternate routes getting to work. "Time-wise," this one is the longest by far...But it is always full of interesting things to see....including this historic old bridge that crosses the Delaware River in the small town of Riegelsville, Pennsylvania. It lies bout 9 miles south of Easton, where we live.

As I drove south on Pennsylvania Route 611, the sun was bright but low on the eastern horizon. The skies were clear. Suddenly, after traveling south about 6 miles, I encountered very thick fog in the river valley. I knew that fogscapes might present themselves.

Sure enough, I got to the old bridge, and, by then I could care less if I was late for work or not.. I HAD to stop!!! I stopped, I took about a million shots and then pressed on to the office. this one is one of my favorites...I hope you like it - These are really cool old bridges and there is a similar bridge in Easton which I PROMISE to show you. It has a twin in Budapest that DarkElf posted a few months ago.

superb mood and wonderful composition! love how the bridge fades away into the fog!

@DarkElf: Thank you so very much, DarkElf! I am honoured :-)

@Ludovic Roudet: Thank you very much, Ludovic! I really am grateful for your kind comment:-)

What we think ? Thanks for having listened to the need of stopping...(be careful when late!!!:-)

@maurizio jaya costantino: Thank you so much, Maurizio - I have to say that I agree :-)

@nafisa: Thank you very much nafsia :-)

The atmosphere is like something from a 1930's movie . . that could well be a Spotlight top left !

@Ronnie 2¢: Thank you Ronnie2c and I have to agree with you..the scene, as I happened upon it, instantly put me back in time...which, at my age, is not difficult to do.nevertheless ...:-)

Gorgeous shot of this gorgeous bridge.

Wow, impressive in its angle and its mood as well - I take this right in my face, and i love it !

Photo frame is perfect,
In attention with brume all the details are well visible.
greeting Denny!Different picture!

superb ambiance indeed and well frames with the round at foreground.

Fabulous, nothing less than a spotlight

wow, awesome; i love it

This is great Denny! Wonderful POV and I love the fog and the processing!

It's a gorgeous old bridge and that fog lends a wonderful mood to the scene.

This image was well worth being late for work ... this is FANTABULOUS! *****

The point of view is powerful.
We are immersed in the foggy atmosphere of that early morning scene.

well, what i think of it is you were dead right not care if you were late for work or not ... this photo certainly was worth it! i like everything about it - the compo, the lines, the tonality, the mystery of a sunny fog or a foggy sun, as you like ...

Fog makes for some of the best shots ever. Nicely captured!

This image has been featured in 2 Remix collections.