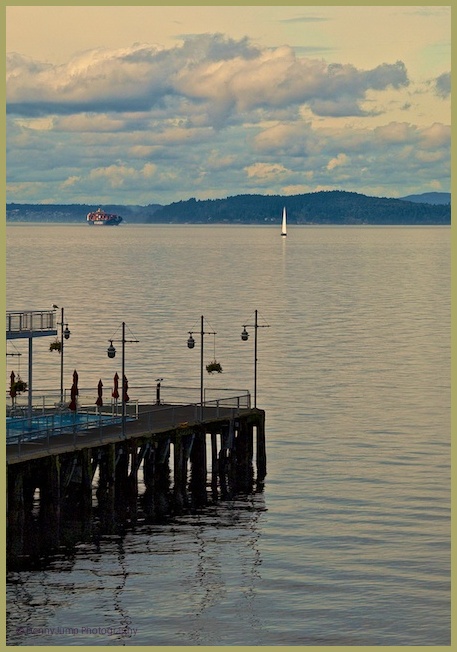 Last Wednesday, we took an interesting walk along a fairly large segment of the Seattle waterfront, part of which is going through some, shall we say "modifications".....(all to the good, I might add).

Of the many, many times that Barbara and I have walked along different segments of the waterfront, this was the first time, with David and Lyndsy and little Aurora, that we walked all the way down from Seattle Center (where the Space Needle is) all the way to Pier 39 adjacent to Pike Place Market.....A distance of almost 2 miles. As we walked and explored we saw some things that most tourists, even locals, would not even notice. I hope the next series of images will provide you with some form of interest or boredom. either one works for me :-)

This is looking generally West-Southwest from the waterfront. Seattle proper is behind us (east) and extends towards the south behind our back.

The Island partially shown here is Bainbridge island. Many residents of the islands such as Vashon and Bainbridge ride ferries daily to work in downtown Seattle and back home each night. Bainbridge Island is visible to the left. Vashon is forther south and is not in view here.

Although this is sort of a quiet (read "boring"?) scene, the large container ship you see there is a Hyundai vessel loaded with containers, heading for the main container center of Seattle to the left of this scene.

From 1974 through 1978, i worked in Seattle as a Longshore Warehouseman on Pier 91 which is off to the right out of this photo. At that time, Pier 91 was owned by the Military, but was being leased out to private contractors. Now the area around Piers 89, 90, and 91 are all dedicated exclusively to Automobile unloading and storage areas.

@Doug: Thank you very much DOug :-) I need to start catching up with your work - s0 sorry!

A fascinating dialog to accompany the scene . . perhaps the word "unloading" toward the end is the most telling. In better times both you and I can remember, that would have been 'loading', Denny . .

@Ronnie 2¢: So true, Ronnie - I will be honest and tell you that this thought did not even cross my mind! How Sad. Certanly, there is a great deal of loading out of the Seattle port - and other US ports as well, I am sure....nevertheless, you are SO right - the balance of trade has drastically reversed. Barbara and I TRY to do our small part, when shopping, by purchasing goods made somewhere other than the places we are both probably thinking of...It is virtually impossible to halt altogether, but try we must. Thanks for your VERY-well placed comment, Ronnie :-)

Beautiful light in this shot Denny! I am looking forward to this series! ;-)

@Eric Cousineau: Thanks so much, Eric :-) Hope al is well in Sherwood Park :-)

@Christian Richer: Hi Christian! Wow, thank you VERYm uch, sir! All the best to you :-)

A pretty shot, Denny. The ship and sailboat add a lot of interest as does your excellent text.

I like thoughts of an 'insider' view of this area and your narrative is helpful for those of us not familiar w/the goings on at the Seattle waterfront. I can only hope those containers could do their return trip FILLED.

This is just beautiful! You have quite a history with this place! That must have been a lovely walk.

Nice! You had a beautiful sky for this one, Denny.

Very nice. I love that area.

i like the composition! nicely balanced and very organised! it is always good to have some background info so it is never boring :-)

very captivating compo and tonality, and what a story to go with it, past and present! how cool to connect with a place in this way ...