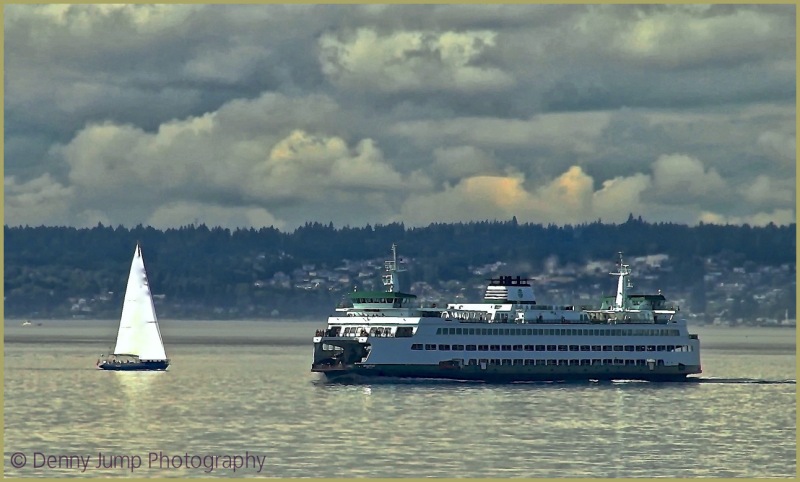 Looking West-Southwest, This is one of the ferries that I spoke of a few days ago. Multiple Puget Sound Ferries make several daily crossings from Seattle to one of the islands and back again to transport residents, visitors, and their cars, bicycles, etc.

Also just a point of information in case you were wondering: Many people are led to believe that Seattle is right at the Pacific Ocean. It is not. The Puget Sound is that very large body of water which "connects" Seattle to the Pacific Ocean which is far to the west.

@Doug: Thanks so much, Doug :-) Sorry I have not been responding too quickly these days...I hope you have dried off from your splash-fest :-)

@ursulakatariina: Thanks so much, dear friend :-)

Ha, seems your sailing lil'one has made a long journey (till my page - or is it the contrary ? ;)) - super cool duet here, big heavy one versus light lil'one both enjoying the water below the rich sky !

@k@: Yah I like the juxtapositioning of heavy vs not heavy the ferry is SO huge :-) Thanks very much dear friend :-)

@Eric Cousineau: Thanks so much Eric :-)

A very beautiful shot of the ferry and sailboat. Love those clouds.

@Steve Rice: Thanks Steve - I like the clouds too...really did not have to mess with them very much - they were quite nice :-)

Stunning shot! The first thing to strike me is the water and how it shimmers and glows. The contrast is amazing with the brilliant white sailboat to the dark ominous sky. Excellent work.

@Gaffey Photography: Hi Frances- Thank you so much.........he sky in Seattle is almost always interesting and full of changes...Thanks :-)

@Scene by Sharon Photography: Hi Sharon - so nice to hear from you - thank you :-) We are doing good <3

Gorgeous light on that ferry, and of course on the sails ... I could happily sail on Puget Sound, the way we did on Long Island Sound!

@Judy aka L@dybug: It is really beautiful that's for sure - Thanks very much, Judy!

There's a kind of glowering feel to this-not sure why, maybe the quality of the light

Beautiful view of Puget Sound!! It's surprising how large the sailboat is in relation to the ferry. The clouds really have some nice dimension to them, almost appearing in 3-D.

@Steven: Thank you Steven, yes I agree..can't qute explain that...I am not good enough to clone it in there, so this was the way it was :-) Interesting..

Beautiful image! I like the light on the sailboat!

@Elaine Hancock: Thanks very much, Elaine :-) It WAS interesting that day :-)

excellent focus and fantastic clarity of the tow boats! i like how you offset them against each other - the difference in sizes creates good visual tension!

Awesome color and light in this shot.