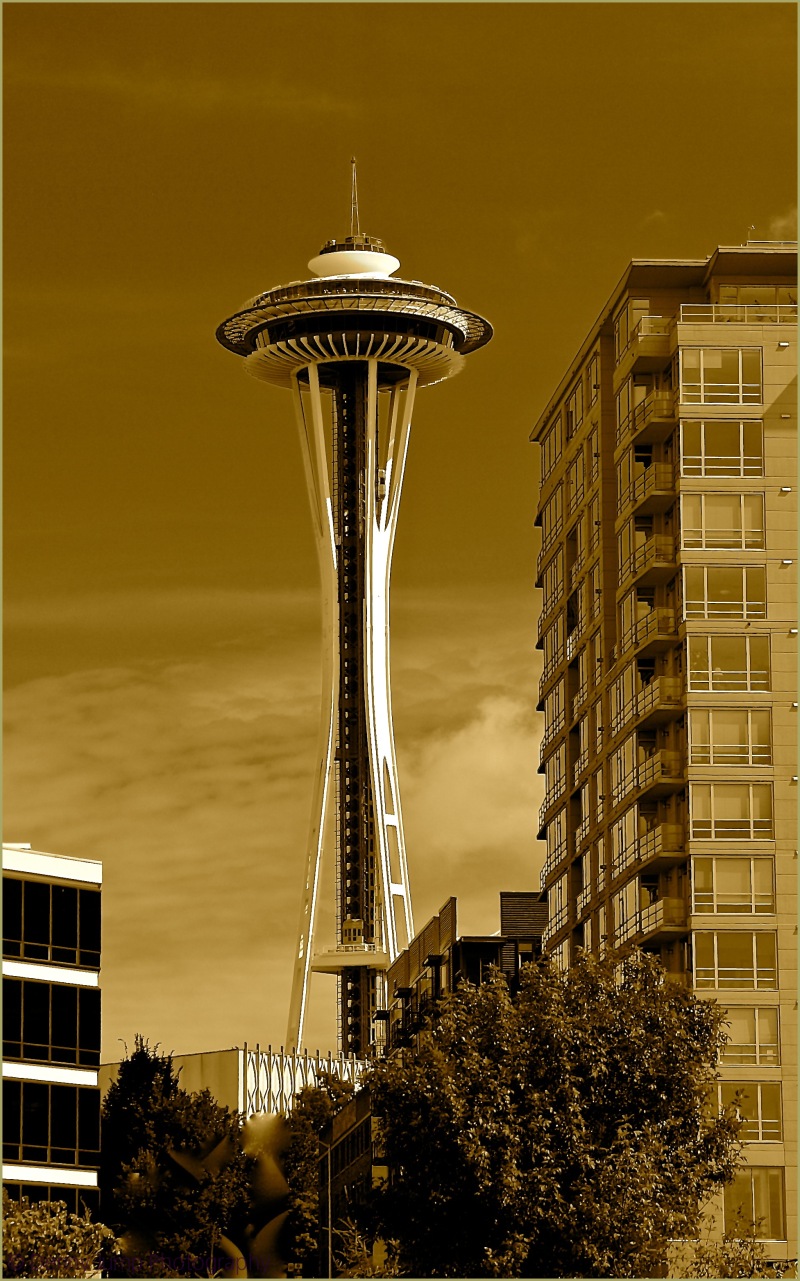 Built to be a marking symbol for the 1962 Seattle world's Fair, The Space Needle has, without a doubt, surpassed that expectation many times over. Those who have been to Seattle and, arguably, many residents very likely have two or perhaps three iconic symbols that reside in their mind's eye when they think of their home city: Mount Rainier, The Olympic and Cascade Mountain Ranges, and the Space Needle. Personally, I think this wonderful structure contributes greatly to this city's already beautiful image. I have posted this "different" perspectivein order to symbolize my belief that the Space Needle is as much of a part of the city's skyline as any other building. Seattle truly is a jewel of a city.

And this pov is beautiful too Denny, an iconic building and beautifully composed and processed

This impressive and powerful capture, with the processing you choose, is magnificent, as this perspective, emerging from the city.

Brilliant shot of this historic landmark. I love the colors and editing. Brilliant! :)

Love your processing in this shot Denny! It really shows off this iconic structure! ;-)

Wow, this is a visual delight Denny, and the toning kinda blows me away!

This is as fantastic an image of the Space Needle as I ever remember seeing, Denny. *****

Eye-catching processing that really allows the Space Needle to stand out beautifully here!!

Even today, so futuristic. It must have blown the original viewers minds when they first saw it

A gorgeous interpretation of this beautiful structure.

@Steve Rice: Hi Steve - thanks very much :-) I was pretty happy with the outcome..entirely edited in iPhoto...no overpriced, Adobe Products were used..

Absolutely beautiful Denny! I lived there during the World's Fair in 1962. The Space Needle then was such fantastic, futuristic structure and to go up it was just totally amazing to me (I was 12 at the time)! Today it is such a big part of the Seattle skyline.

@Elaine Hancock: Wow how incredible that must have been....so amazing.Thank you very much, Elaine :-) <3

fantastic composition! i like how you kept everything very straight and with minimal distortion! great choice of colour tone in processing as well! lovely detail!

Wow, what a beautiful image. I really love your color!

Nice tones. I also like that this is not the usual photo of the space needle as you have given us a different perspective.

Indeed it is a very characteristic. Nicely captured.:-)