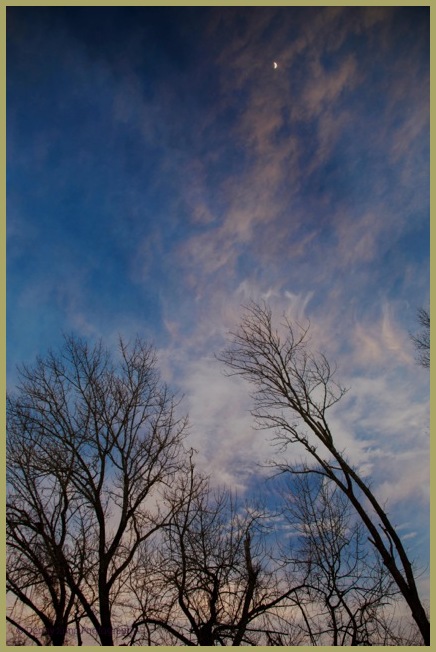 High above me on Friday evening, the waxing moon for March - known as the "Worm Moon," was a making a grand show of things. First Nation tribes of Canada and many Native American tribes of the US described this month's moon as such, because, in March, the soil begins to loosen and warm up, encouraging earthworms to begin their springtime activity.

I was really enjoying the sky Friday evening. The clouds made perfect reflective elements for the setting sun, and the air was clean, making the blues absolutely beautiful.

You have caught that special 'oneness' here for sure, Denny. Some folks can never quite see it.

Beautifully composed Denny. I love the name first nation peoples gave this moon, thanks for your explanation.

Beautiful soft colours in this very wistful composition Denny! There is a wonderful serenity and peacefulness to the shot! Nicely captured! ;-)

Beautiful image Denny! We must have been doing just about the same thing. I took a very similar picture on Friday!

this is beautiful.
Thanks for the interesting info