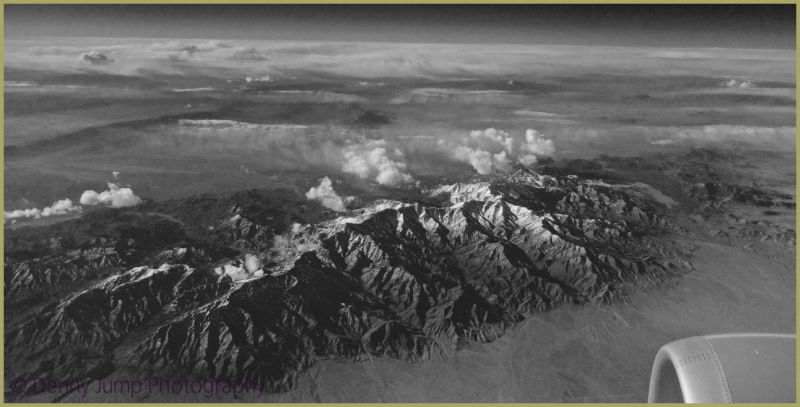 Flying eastward from San Francisco to Newark or New York City, the airline routes generally take you right over California's Sierra Nevada Mountain Range and continue eastward over the numerous ranges of mountains that exist in Nevada. These ranges are not connected with each other and virtually all of them run in a north-to-south direction. They are typically 50-150 miles long and are separated in-between, by low desert lands. So the elevations climb from typically 500-1500 feet on the desert "floor" to sometimes 8,000 - 12,0000 feet on the peaks.

The climate throughout the state is typically arid, but as can be seen in this shot, snow does fall in the higher elevations of Nevada's mountains as the storms coming in from the Pacific, still have enough moisture in them to deposit snow on Nevada's mountains.

I have always been intrigued by the Nevada.It is a truly "wide open" State with views that seem to go on forever, and though it poses a challenge in summer with the searing heat, it is just a magnificent place to visit.

This small range I THINK is the Grant Range. Troy Peak is the highest point here which is around 11,000 feet.. We are about 60 miles east of Tonopah (toe-no-pah), Nevada. I chose to process this in B&W because it seemed to add that air of wonder and mystique. But I'll show some color shots soon.

A fantastic sight! Wonderful view from the plane! A great b&w image!

A dramatic and beautiful shot of the mountain range. The light is just perfect.

great in black and white !