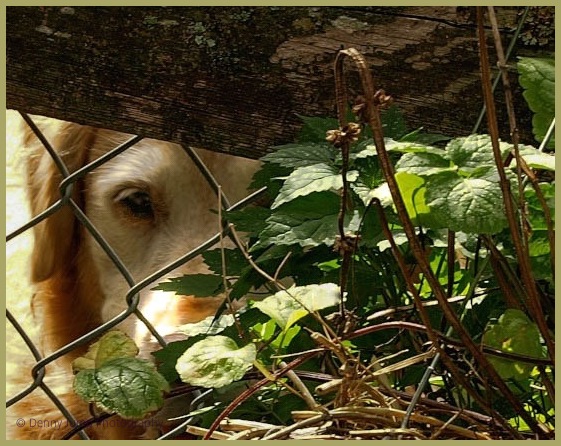 When we visited Seattle last August, we stayed with Barbara's sister, Debbie for several nights. Her Golden Retrievers, Molly (the oldest) and Bob are such beautiful dogs. I had captured a shot of Molly peeking through this fence but the shot was not cropped like this. I finally decided (almost one year later) to "do something" with this shot. I had to do some serious work with control points in Nik Viveza and Nik Color Efex Pro to adjust the brightness in the leaves and take away some of the shadow in Molly's eye so that at least a bit of her eye was somewhat visible. As you can see, it still needs a bit of work burning some highlights and brightening some dark areas, But it's a start .... Let me know what you think :-)

Also, everyone, thanks again to all of you for your continued kind comments. I sincerely apologize for my long absence in responding and visiting all of you. My work is really getting to me, - totally stressed out - but hopefully things will begin to ease up just a bit in the next month or so. Thank you, all <3 Denny

Nicely processed given what you told us Denny, I like how you capture her peeping through the fence.
I hope your work eases soon Denny, and mine too for that matter ;-)

A very playful shot Denny! Almost as is she was playing peek-a-boo with you! Well done! ;-)

This is an adorable image Denny. I love the details of the plant and the fence. Beautiful color. Molly looks like she is interested in what you are doing. My golden is just so curious about everything! I am so sorry about work. That is the way I felt and I just had to change something or I would have had a meltdown.

When I checked your image for today, I just HAD to comment. I know nothing about the technicals, etc., but I LOVE this shot. It's so cute. Have a good visit at the "Cod" with the family. Take pictures for me. Love to you both. peg

contrasty scenes are never easy to capture and process and you have done a good job here! i like frame itself especially - nice moment and timing as the dog looks from behind the fence partly hidden by the leaves!