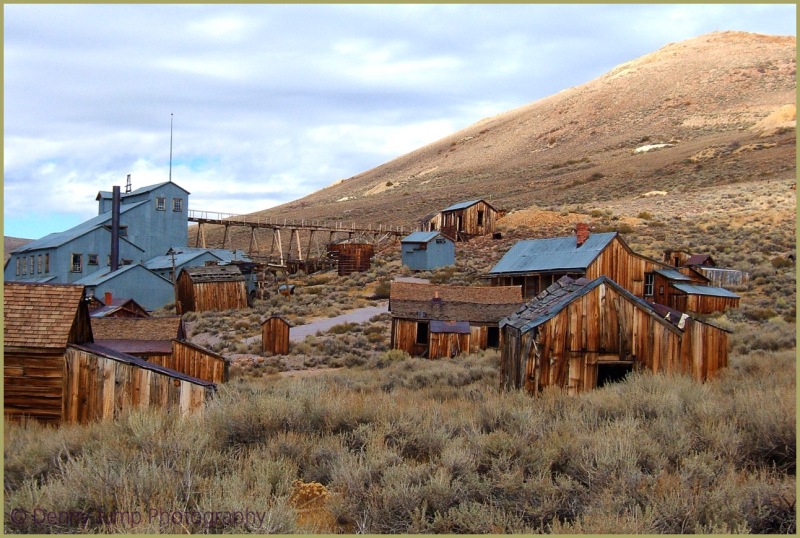 Bodie, California began as a mining town when gold was discovered in1859 by a group of prospectors led by William S. Bodey (for whom the town was later named). All sorts of minerals were discovered in the dry desert mountains of the Eastern Sierra region of California. The real "Boom" began around 1876 when the Standard Company of California discovered a huge deposit of gold ore.

This big metal building is one of two huge Mining facilities that operated in Bodie. Between 1879 and 1886 the mining here resulted in the processing of over 32 Million US Dollars in Gold and 7 Million Dollars in Silver. All hauled out of this location in just that relatively short time. This numbers probably translate to billions today.

As Bodie grew and prospectors flooded into the town, it grew to almost 10,000 citizens. There were Barbers, Doctors, Ministers, Teachers, Schools, Stores, a Fire Battalion, a jail (of course), Banks, and all sorts of men, women and children.

I highly recommend visiting this place if you are ever in that area of California - do be careful, summer temperatures become VERY hot. Nevertheless, this is an amazing place and i cannot wait to go back. It has been almost 8 years since we were there last. I am delighted at how well these images held up from the little Fuji I used for all of these.

Over the next week or so, I'll show a few more Bodie images interspersed with others so as not to drive you crazy :-)

Fascinating 'atmosphere' to this place just standing there while Time goes by . . can feel the silence.

@Ronnie 2¢: Hi Ronnie - Thank you So much! This is the exact feeling that I got - and STILL get - when I visit or think about Bodie. The aura and spirit here is moving, once one starts to explore here.

What an interesting little town it is, if the buildings could talk they'd tell us many interesting stories...
I can imagine the people roaming on the street there. Children crying, men fighting with their guns and jolly singing coming from a saloon.

@ursulakatariina: Thank you Ursulakatariina. I will post a few pictures of the inside of some of the buildings which have been maintained .

A beautiful image of the part of town with the ore processing plant. I like seeing the ramp they ran the ore cars up to the top of the crushers on.

@Steve Rice: Hi Steve, Thank you very much. The crusher equipment and facilities are really something else. I hope you can get there one day, with your shooting artistry, it would be wonderful to see what you come out with :-) I LOVE your images :-)

I fascinates me how somewhere like this can be abandoned almost quicker that it took to establish. A really interesting series Denny

@Doug: An excellent point, Doug..you are so right, too. It really did "empty out" much quicker once the gold was depleted....makes one think of what we are doing to our natural resources now doesn't it? Thanks so much sir

We really wanted to go on up there in Oct. when we were in Sequoia and Yosemite, but there was just so much to do, and then San Francisco won out for the last few days.

@B. Thomas: Completely understandable, Barbara. That would have been a good time to go - perfect really...but San Francisco aint no slouch! I LOVE SFO :-) Your images from the entire trip were fantastic! :-)

good perspective across the township!!

@DarkElf: Thank you sir...the entire township is a bit spread with groups of buildings here and there, and then one "main" street...I will show some more over the next week or so, interspersed with some of my other "masterpieces'(Yah, right!)

@L'Angevine: Thank you L'Angevine! I am very much grateful for your comments and for your beautiful images :-)

I always love learning more about the places of interest to out of staters, being a Californian since I was 5 years old. I hardly remember being in Chicago for the first five years. I truly am a Californian now. I prefer living in the northern area of the state, but have many many memories of the eastern deserts and the secrets they hold. Thanks for this reminder, Denny. One of these days you'll have to make a photo trip to northern CA, and invite Bettina to join us on a photoshoot. Take good care. I can't wait to see more...

@LauraS: Hi Laura - Thank you very much. I think your idea is a good one and you may remember I am a Northern Californian as well - Good old Roseville "=_