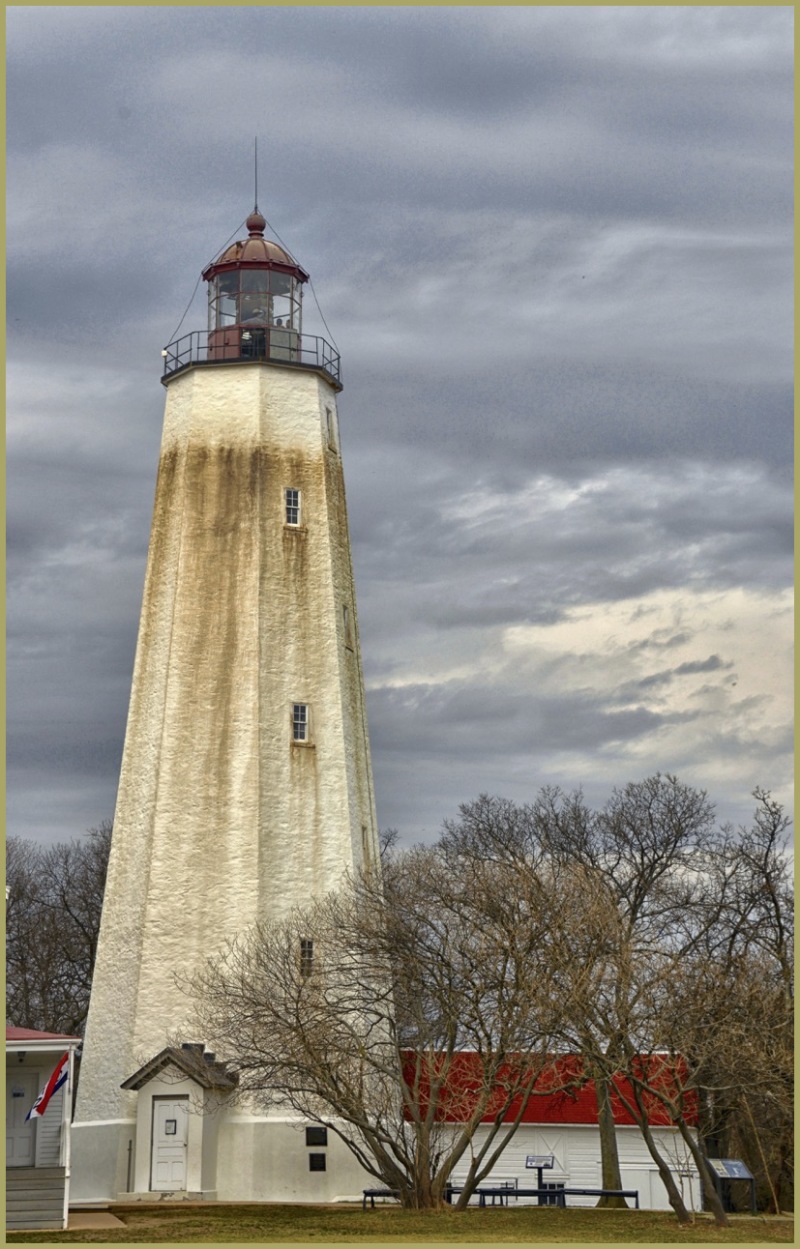 Completed in 1764, this is the Lighthouse at Sandy Hook, New Jersey. The oldest lighthouse in America. Although it is certainly not "old" when compared to many lighthouses in Europe and around the world, it served a key role for many years. Completed 10 years before the American Revolution, the lighthouse, ironically, became a part of British Held territory in North America all throughout the actual revolutionary war.

Sandy Hook is a long, narrow strand of mostly dunes and marshes that extends northward from the New Jersey shore, reaching northwards towards new York City and Long Island.

Before and after the Revolutionary war the lighthouse served a vital role, as it has always been the only lighthouse that stands at the entry to New York and New Jersey Harbors.

Barbara and I made the 90 minute drive to this spot because Sandy Hook has long beaches and it can be a fun place to come and enjoy the birds and views. On good days the skyline of New York City can be seen...although far away. Unfortunately, this was not one of those days. Nevertheless, I will hope to share a little bit of history and information in the next few posting days that will feature this area.

Finally, Sandy Hook has been incorporated with a larger protected area known as Gateway National Recreation and Preservation Area. It is a protected area for wildlife as well as ecosystems. I hope you enjoy this little series coming up.

That's a real good sturdy find and you had me looking for the oldest complete lighthouse in the UK which goes back to only 1669. There is a Roman lighthouse here somewhere but that one is even before my time !

@Ronnie 2¢: Hi Ronnie, Thank you so much! One thing you might enjoy- Barbara and I watched a short video regarding the history of the lighthouse...apparently many years later attempts were made to destroy the lighthouse by blasting it to smitherines but the damn thing was so solid,the cannonballs just exploded and bounced off the lighthouse! Good Heavens!!

impressive and interesting info block, denny, and a promising start to what i'm sure will be a most rewarding series of photos from the area!
i like this one because of the dramatic sky and the way the venerable lighthouse reaches towards the clouds !

@franz: Thanks very much my dear friend! Our visit was short and it was the first time at this specific location (Fort Hancock) but I'll try to add as much history and other information as I can in the short series this will be;-) Hugs to you and all the family <3

A beautiful shot of this old timer. It makes these West Coast lights seem like mere children.

@Steve Rice: Well they (the West Coasters) are damn good looking children, that's for sure. I do love the West Coast Lighthouses and I miss them dearly, but there are so many here on the East Coast and in the Great Lakes, etc that I have not yet seen, I know they are very cool as well. This one here, Sandy Hook (on Fort Hancock property) is one solid sucker though, let me tel you!! You may find my response (above) to Ronnie of interest in that regard ....Thanks So Much, Steve :-)

I don't think I've ever seen or heard of this one. Very cool.

@B. Thomas: Thanks very much, Barbara...it is kind of an interesting place - Sandy Hook and Fort Hancock....A bit more to come :-)

A gorgeous image of this lighthouse!

@Elaine Hancock: Hi Elaine - Thank you so much :-)

Wonderfully captured, presented and described Denny. I like the contrast between the structure and the dramatic clouds.

@DarkElf: Thank you DarkElf! I used a bit of Nik Detail Extractor here, to bring out some of the texture in the clouds....Thanks very much :-)

@L'Angevine: Thank you so much, L'Angevine :-) I really like your image today :-)

A beautiful capture of this lighthouse!! For being the oldest in the country, it looks to be in good shape. Thank you for the informative background!

@Steven: Hi Steven- Thank you very much! Yes the lighthouse is solid for sure. Unfortunately I can't say the same for many of the other structures at Fort Hancock on Sandy Hook....Not really their fault but a kind of weird/sad situation upon which I will try to elaborate a little bit in the next few .;-)