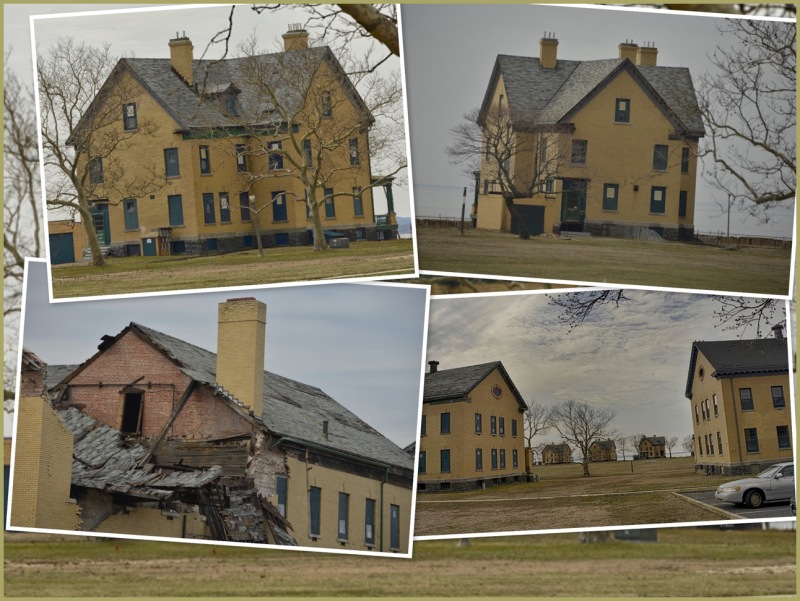 The Good, The Bad, the Ugly - Fort Hancock

Poor old Fort Hancock! It does not deserve this kind of state of affairs!

The Fort was established a few hundred years ago to serve as a multi-faceted establishment that cold thwart attacks from unfriendly foes / help the citizens in time of storms / serve as a deterrent to missile attacks during the Cold War / protect the lighthouse / serve as training ground for Mariners and Coast Guard personnel / and provide homes to all who worked and served there. Now, and for the past 20 or 25 years, this Fort has struggled to regain that old vibrance.

When the US National Park Service (Gateway National Area) essentially "took over" the Fort, funding issues were still prevalent, So things really did not change dramatically. Over time, efforts have been made to reconstruct and replenish the buildings and structures, but the progress has been very, very slow. As I noted in the previous post, the officer's family houses, places of pride for so long, now are in jeopardy. Other buildings on the base (as you might see in my collage above) are sitting and waiting for repair efforts to begin...they have been waiting for several years and will likely be waiting for a good while yet.

Meantime, during summers especially, Boat loads of tourists and visitors pour onto Sandy Hook from New York City and surrounding areas. The beautiful, huge beaches of Sandy Hook receive millions of visitors seasonally...but the money just does not seem to seep into the repair and reconstruction efforts here at the fort.

So here we are....and here it is: Sandy Hook and, more desperately, Fort Hancock! Waiting for revival and some kind of miracle.

There is SOME happiness here..As I noted above, The beaches are vast and large and they offer a wonderful retreat for citizens of New York, New Jersey, and even Pennsylvania where Barbara and I live.

Over the next few posts ,i will try to bring a few smiles back into this situation with some shots from the National Recreation area and some lighter moods of Fort Hancock images :-) I hope you can say with me - I realize these shots are more "Touristy" than anything else..I did not do a really good job of being a photojournalist - I was in a bit of shock myself :-)

Nice set of photos. The house is pretty much a write-off. The others look fixable. Would be a nice heritage park.

@beach: Thank you Beach - Actually the damaged structure shown is the east end of a large Barracks building rather than a house. I don't know if that makes any difference really, but perhaps it can be redone like some of the other barracks we shall see. Thank you So much for your comment and view. ;-)

Love you work on this - great documentary style photos and write up!

Shock is the appropriate response to these collapsing buildings. We have such screwy priorities in this country. Tax cuts for the rich Trump all else.

a fine collage to show even more neglegt ... how sad!