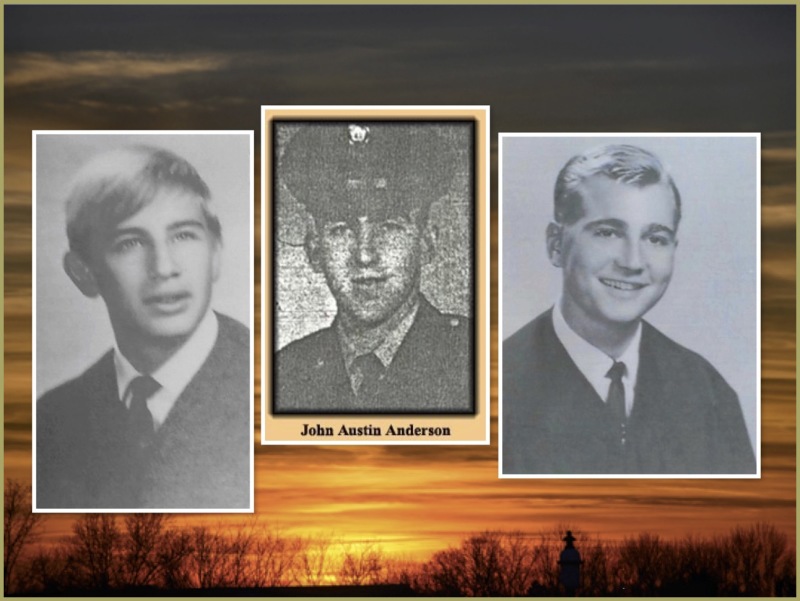 Posted by Denny Jump (Bellevue, WA, United States) on 29 May 2016 in Documentary & Street.

This is Memorial Day in the USA.

Every year on this weekend, I find myself constantly thinking back and remembering friends, events, and experiences that I dealt with in my time in Vietnam from December 1967 to December, 1968.

I was fortunate - very fortunate. I returned home without physical wounds and, by comparison to many, a somewhat manageable level of post war trauma. However, my mind is still filled with the terror that we saw and I still have bad dreams at times.

But I was lucky!

The three faces that you see above in the image, were not as fortunate at all. They were three of the estimated 58,150 "America" Combat deaths from that war.

Many of those deaths were Canadians who had volunteered into the US Army and subsequently were killed in Vietnam. This fact is one that I do not and will not forget. ....The center portrait above is one such Canadian. He was John Austin Anderson, a friend and platoon mate of mine, killed in an ambush on top of a mountain in Vietnam. John,a Canadian citizen, fought for America....You can understand why I now grow livid when I here certain politicos condemn persons of other countries who help America in the worst of times. John was killed on May 13, 1968.

The images to the left and right were high school classmates of mine. Danny Kaye Rich on the right and Melvin Lapp on the left.

Melvin Lapp - (Mel, as we called him in school), was a great guy. I was not aware that he had gone to Vietnam until some years later. I learned that Mel had had some premonitions and was worried about things...shortly thereafter he was killed in a fierce attack on October 27, 1967.

So these heroes are only three who have died out of the tens of thousands. I knew many others who died or subsequently died from affects. How many others have relationships and memories like that?....How Many of us who served have a hole in our hearts and a pounding noise in our ears that rings and screams every day every hour every minute? I do.

I only ask those who see this, to please close your eyes and remember the soldiers and sailors and airmen who fought to protect you and your country. Just Like me, many of these fighters probably did not agree at all with the war they were fighting in, but they did it because it was their job - their duty to fight for each other and take care of each other.

Please remember those who served, regardless of where you are.

Your remembrances have reminded me of a high school classmate who joined the Navy at about the same time as I joined the Army. He became a corpsman thinking that would keep him far from Vietnam or so he told me. What neither of us realized at the time is that the Marine Corps is part of the Navy and can get corpsmen from the Navy if needed. So, Paul got attached to a Marine infantry unit and was killed in action.

As for my own experience, our company had too many who lost their limbs or lives. I was very lucky in that my wounds were minor. For that, I'm very grateful.

In the end though, we can't change history but, we can learn from it. Unfortunately, the misadventures in the Middle East show we have learned nothing. So, history repeats itself.

@Steve Rice: I can't agree with you more, Steve. I do NOT understand why we have to be so stupid as a nation - it can only be that the ambitions of politicians override everything else...including the value of our soldiers, sailors, and airmen. Thank you sir, I know we have "talked" about this before so I will not take more of your time here - but to remember you and Paul and give you my love. My Best to you, Sir... Thank You for all you have done.

: Helen : from from Australia is now in Portugal, Spain

Very touching tribute Denny. I remember all of this and how scared I was at this time, despite being at home. Wars are terrible things. Sadly, you are correct, history repeats itself ..... over and over ...sigh.

@: Helen :: Thank you very much, Helen. It is for fine people like you that military people do what they have to do. Thank you and be well :-)

A wonderful tribute Denny it choked me up reading your words and those from Steve. They deserve our honour and as you say, they went and fought because they were sent there, it's politicians who start these wars but often young men, and women, who give their lives or part of themselves. They do not ask much and our respect should be given to all who fight for our freedom or what they are told is right by our governments. As for those from other nations joining, they do so because they believe it is right and honourable to offer friends help, my father had nothing but praise for guys from the USA who flew together with him in the RAF as part of the Eagle Squadron, and my son praised the guys he was alongside in Iraq. I don't make any argument as to whether the conflicts they were in were right or wrong, I think you are well aware of my views there, but the fact that they offered their service in the belief that they were, and are, protecting us makes them great in my book.

Thank you so much, Doug. I agree wholeheartedly with everything you say - and you said it so well. I believe that "Free People" have a special bond and when the Warriors see others in trouble or in need of help, they jump to the cause. The only righteous people around anymore, seem to be those who defend, and there is a special connection amongst them. I Thank you and I thank all in your great land for all the shared sacrifices

A wonderful tribute Denny. I was going to go to Arlington Cemetery today and for some reason I could not go. I go there and it is very depressing to just sit and look over the thousands of headstones. I used to find comfort there since my parents are buried there but sometimes it just makes me so depressed that so many young lives were cut down in their prime. The young man buried next to my father was only 19 years old. It breaks my heart. I did not prepare a picture for Memorial Day since I was gone but all those that served are in my heart.

Hi Elaine -,I completely understand, believe me! This topic is a very depressing one as it is and, in your situation, I am sure it is even more difficult. Don't worry about comments or posts. We all know you and what you have done to serve this country. You are loved, believe me. Be safe and feel the love. Thank you so much!

Very thoughtful and touching tribute! So many wars and yet mankind has learnt nothing...

@Darkelf Photography: Thank you, sir...it is so sad how stupid we are...and we now consider another war monger businessman for president.....I know I am not supposed to editorialize here, but I cannot help it...Thank you sir!

Beautiful tribute, Denny.
I wish one day we people see that the wars aren't doing any good, but I'm afraid that's not gonna happen as long as there are any people living on this planet.