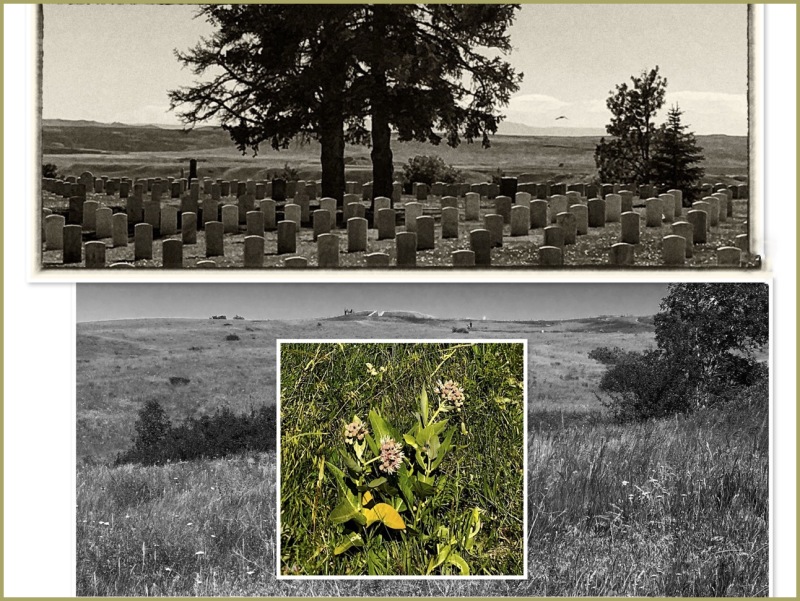 For years, this Monument stood as a tribute only to US Army soldiers and others who fought for the end result of taking over the land and driving the original inhabitants from this place for the sake of "progress.

Anyone who first settled a place would be understandably and emotionally tied to the land and should rightfully be allowed to consider that land his or her own....Unfortunately, this was not necessarily the case, and still isn't in many parts of the globe.

However, at least, now, some tribute and recognition is given to the Native Americans who first settled and dwelled in the land and fought in this battle.

In Italics below, I have copied ad pasted some information from Wikipedia as well as Monument literature:

"A Bill passed by US Congress years ago, mandated that this Monument be changed to the name shown above and that markers of Sioux/Lakota and Arapahoe warriors be place on the grounds on various locations. Markers honoring the Indians who fought at Little Big Horn, including Crazy Horse, have been added to those of the U.S. troops. On Memorial Day, 1999, the first of five red granite markers denoting where warriors fell during the battle were placed on the battlefield for Cheyenne warriors Lame White Man and Noisy Walking.

The warriors' red speckled granite memorial markers dot the ravines and hillsides just as do the white marble markers representing where soldiers fell. Since then, markers have been added for the Sans Arc Lakota warrior Long Road and the Minniconjou Lakota Dog's Back Bone.

And so, in the top image of the collage, you may notice the bird flying over part of the cemetery between the clump of tres and the lone tree on the fear right....When I was hitting the shutter on my iPhone, I noticed the bird as he suddenly flew into the picture. Being the omen-related person that I am, I took that as an omen from the spirits that the bird would fly over all this area regularly to ensure that peace remains in this Battlefield where so much blood shed occurred.

I pray that all the spirits residing there somehow find a way to join together and resolve that this kind of battle never takes place again.

It makes a beutiful picture even if the story behind it is so sad.

@ursulakatariina: Thank you dear pal! The story is VERY sad....

@Steve Rice: Thank you Steve. I was impacted even though the visit was extremely short...

Great thoughts and information, accompanied by wonderful images. Such a well known site, even around the world I think. There is so much context and drama hidden behind the battle and monuments.

@Darkelf Photography: Thank you sir! The story of this place is varied and dramatic...depending on who is telling the story, the roles of evil and good switch dramatically....Fortunately, of late, the stories seem to be starting to normalize and be more accurate to what I think the reality was...but still there is much improvement and "fact checking" to be done..