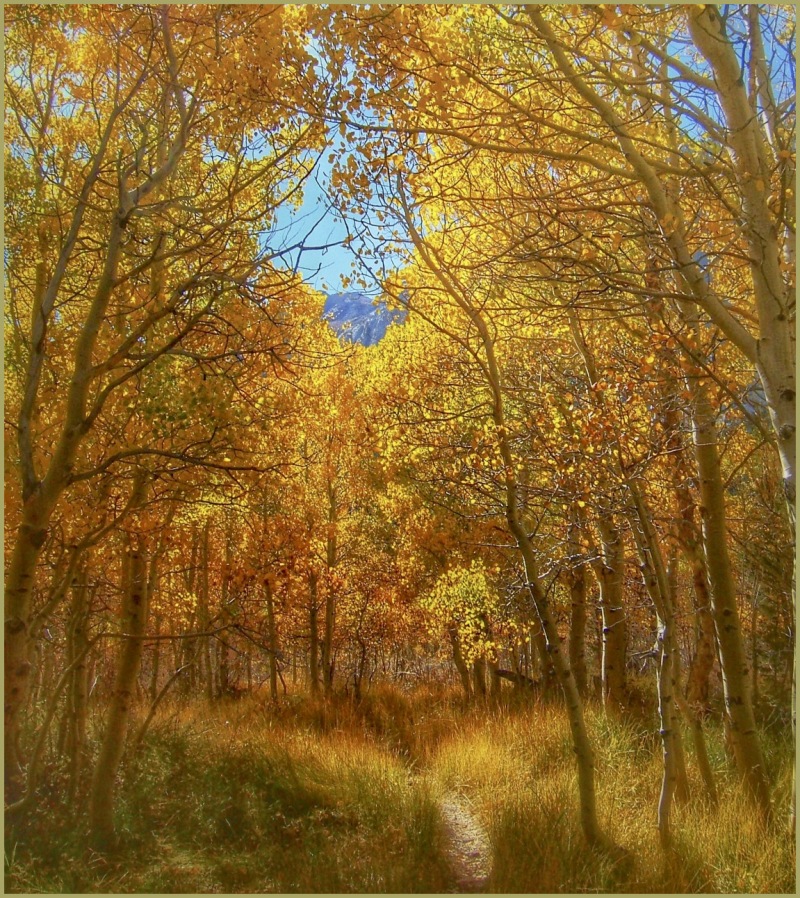 This is the beginning..."The Time of the Season," as the Zombies sang!
This is the time when beautiful colours of another breed begin to display their very own special talents and they eventually overpower the Purples , Pinks, Reds, Whites and Greens of Summer as it begins to fade into the distance,

We all have places where we dream of being in a particular season and THIS is the place that I dream of being in Autumn: The East Side! No, Not New York as jazzy as that might be.....Not the Cascades as powerful as they may be... .No...I want to be Here, on the Eastern side of the Sierra Nevada Mountains. Where the Aspens, Birch, and Sycamore join together, their golden leaves dancing a jitterbug in the breeze while the azure sparkling waves of the beautiful lakes slap in percussive rhythms!

Yes - Here, on the Eastern Side of the beautiful Sierra Nevada Mountains is where my dreams take me!
After all, It's "The time of the season!"

This is beautiful! Wonserful colours and light.

@ursulakatariina: Thank you so much my friend;-)

Glorious golden moment . . in my world of concrete, glass and steel, the seasons are often apparent only on the thermostat !

They don't get much better than this Denny. This is truly a superb image. The scene and color are just perfect and it has to be 5*****

@Frances: Much too kind my friend ;-) Thank you SO much. Quite honestly the shot was hand held and not all that steadily...But the sensation I got and still do get has always lived in my heart and memory. Thank You ;-)

Denny this is beautiful and using one of the Zombies songs to explain it is the icing on the cake. Hope you and Barbara are well my friend

@Doug: Thank you, my friend! Weren't the Zombies great? We are currently packing up in preparation for the Moving Van which is currently scheduled to be here on 5 October. Seems like sufficient time but it isn't! ;-)

@omid: Thanks very much Omid!

@Steven: Thanks so much, Steven.

Hey Denny ! What wonderful yellows, here ! And this blue sky, between the branches, is it not gorgeous? This path is inviting us entering in this paradise.
Yes I am well, very well, many thanks for your messages. I hope that's also the case for you, too !
All the best !

@Gérard Beullac: Hi Gerard! SO wonderful to hear from you. We we fine and preparing for big move back to Seattle where we lived many years ago. I am retired now and feeling "Tired!" Ha ha - tired and penniless but happy . I always find happiness in your work. All the Best!

The east of the Sierra in the autumn is the Holy Land! All through the 60s and 70s, that's where I headed up into the high country.

Gorgeous colour tones that are glittering beautifully in the sunlight.

@Darkelf Photography: Thanks so much Sir. Certainly not a great photo in an "Image Quality" sense but it has always been in my dreams. Thank You