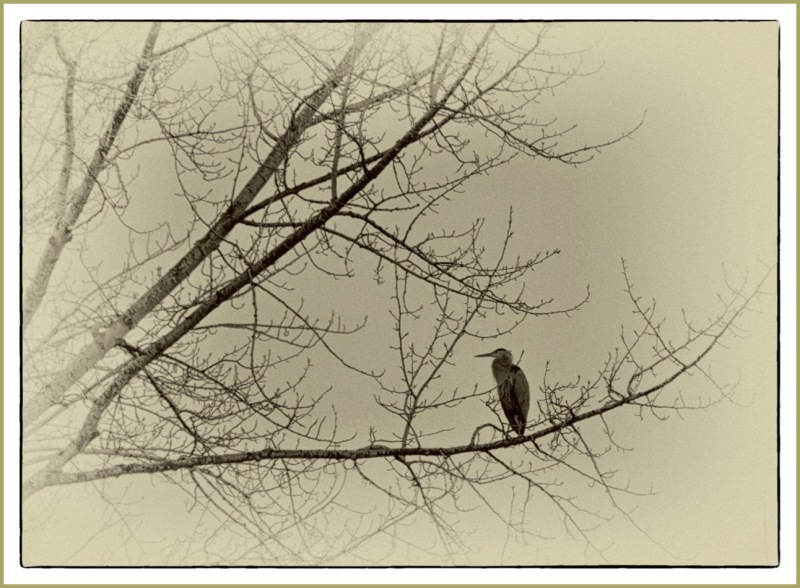 On a cold and misty day, This Heron came swooping in from out of nowhere, sailing right over me! His entry was so sudden, I had NO chance of catching him in flight, but, luckily, he landed in a tree just above me. I was quite surprised that a Heron would even bother to land in a tree rather than alongside the water, but he seemed to be satisfied with where he was as he patiently looked around the landscape, I finally recovered from my excitement and captured several shots of him sitting up in this tree.

The day was a flat gray day, so, in post-processing, I just sort of played around and finally found this preset in Nik Silver Efex Pro 2.

Herons are so elusive and they have always seemed to have a 6th sense about a stranger's presence (at least in my opinion, they do). I was delighted that he sat still for me.

Yes, I find it odd to see herons perched in trees but they do have the right feet to hold on tight . . and they nest up in trees, too !

@Ronnie 2¢: That's amazing! Yes, I was unaware of that until just recently ...Thank you Ronnie ;-)

Beautiful treatment and presentation, Denny! I agree with what you say about herons - I never seem to be quick enough to 'shoot' them before they take off!
Here, we have quite a few grey herons and white egrets. The egrets are not normally found in trees, but the herons do build their nests there. So maybe this one is an immigrant from Austria (a documented one, I hope ... ;-)

In Sedona, along Oak Creek, we saw the herons returning to their rookery in the tree tops just before sunset. They would land and stand near their nests. There were a lot of birds nesting close to each other. I like this photo and your processing that works so well.

@Steve Rice: Thanks Steve ;-) Yah, I was amazed to learn that Common Mergansers Also nest in trees and when the baby is born his first act (almost) is to fly out of the nest and land in the water! Reminds me of my High School Swimming test...I almost didn't succeed ;-)

The foggy presentation adds a mystery to the shot. Great.

@L'Angevine: Hi Francisco! Thank you so very much ;-)

I like very much the image as presented. Great work!

@Francisco Romero: Hi Francisco! Thank you so very much! ;-)