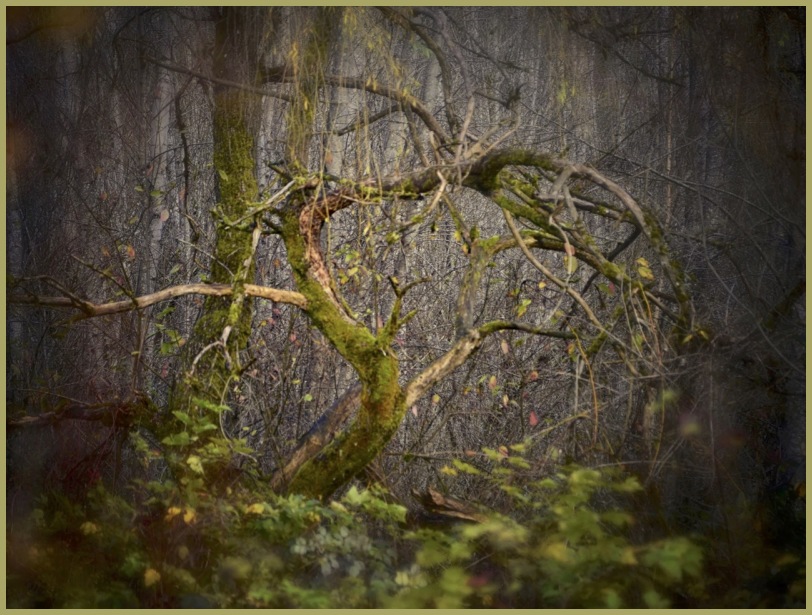 "The Wicked Witch of the Northwest"

This is a shot I captured months ago (October, 2016, to be exact), however, as is often the case for me, I may feel that a story lies somewhere within the scene, but I don't always figure that story out until quite some time later.

So, there I was, walking around a lake named "Cottage Lake" that was just large enough to be called a lake. There was a wooden walking path that wound its way around the thickets, shrubs, marshes, and pools, and I was enjoying the opportunities the boardwalk provided to get some"inside shots" to focus on spots that were "further back" i.e. "deeper" into a particular scene.

I spotted this tree, way back in a rather congested spot, but the shape of the tree really had an impact on me. I just HAD to do something with this scene! My immediate reaction was: "this looks like an old wicked witch all bent over!"

This scene stuck with me for months and the task of finishing the image to make it complete was waiting, as well. After many edits and deletions while retaining the original shot, I finally settled on the view that we have here. I wanted to retain the feelingI had in my mind and the sense that still lived in my imagination.

So that's the story! I hope you enjoy this "Wicked Witch" and all of her arthritic bends....(I can relate to the "arthritic" part ;-)

Makes me think of old fairy tales with scary witches. Great shot and a great story to go with it.

: Helen : from is currently photographing at home in, Australia

Fabulous! I was expecting her to jump out from somewhere!
Hope I don't have nightmares tonight!

@: Helen :: You would only have nightmares if you actually saw me ;-) Thank you, Helen!

The shape of the bent tree can certainly invoke an image of an old witch and your vision and imagination helps us here a lot. I like how you used the vignetting to focus the attention on the tree. Great work Dennis :-)

@Darkelf Photography: Thank you very much, Maciek! Not the best image but still, the scene was intriguing to me ;-)

She's quite the old lady who's been through a lot. A great interpretation of her.

I don't want to meet her at night!