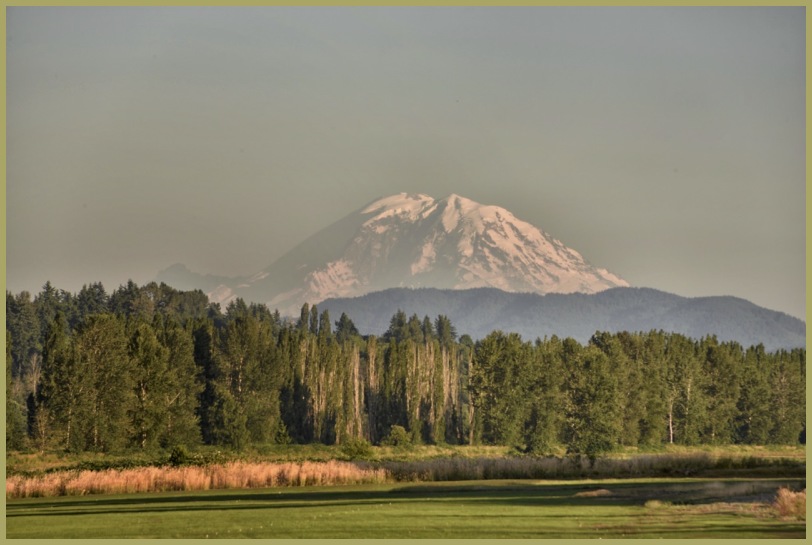 This is the famous Mount Rainier, - 14,411 ft (4,392 m)
From the location of this shot, I was about 64 miles North of Mount Rainier. Since Rainier is a volcano, like it's sister peaks in the Cascade range, it is considered a very dangerous volcano.

The mountain was called "Tahoma" by the Native Americans... It is a large active volcano located 54 miles (87 km) south-southeast of Seattle, in the Mount Rainier National Park. It is the most topographically prominent mountain in the contiguous United States and the Cascade Volcanic Arc, with a summit elevation of 14,411 ft (4,392 m).[4][5]

I like the view from this spot because it shows the enormity of this massive peak....I hope you like it ;-)

A superb scene. Excellent look at the mountain.

@Steve Rice: Thanks Steve ;-) I had to work with this puppy to get it decent because it was a late afternoon/early evening shot, but I liked the way it looked so I went with it LOL ;-) Thank you, sir...

Stunning capture, Denny!! It's odd to see so much snow on it when the landscape is so green and lush in the foreground.

@Steven: Thanks so much, Steven! Yes there was a LOT of snow this past winter on all of the Cascades, Olympics, Sierras, White Mountains, etc all along the West Coast..Rainier is so doggone high that a great deal of the snow remains up there...The view here is a long shot so, as you know, that brings everything into a "closer" perspective, but yah, the look is kinda cool when coupled with this lush green Sammamish River valley from where I shot this from . Thank you SO much, sir! ;-)

This is my kind of landscape. Wonderful shot.

A spectacular image! I lived in Washington state when I was around 11 years old and I remember trips to Mt. Rainier. It is so beautiful!

@Elaine Hancock: Thanks so much, Elaine. It IS a compelling mountain and scary volcano. Tahoma is truly mighty!