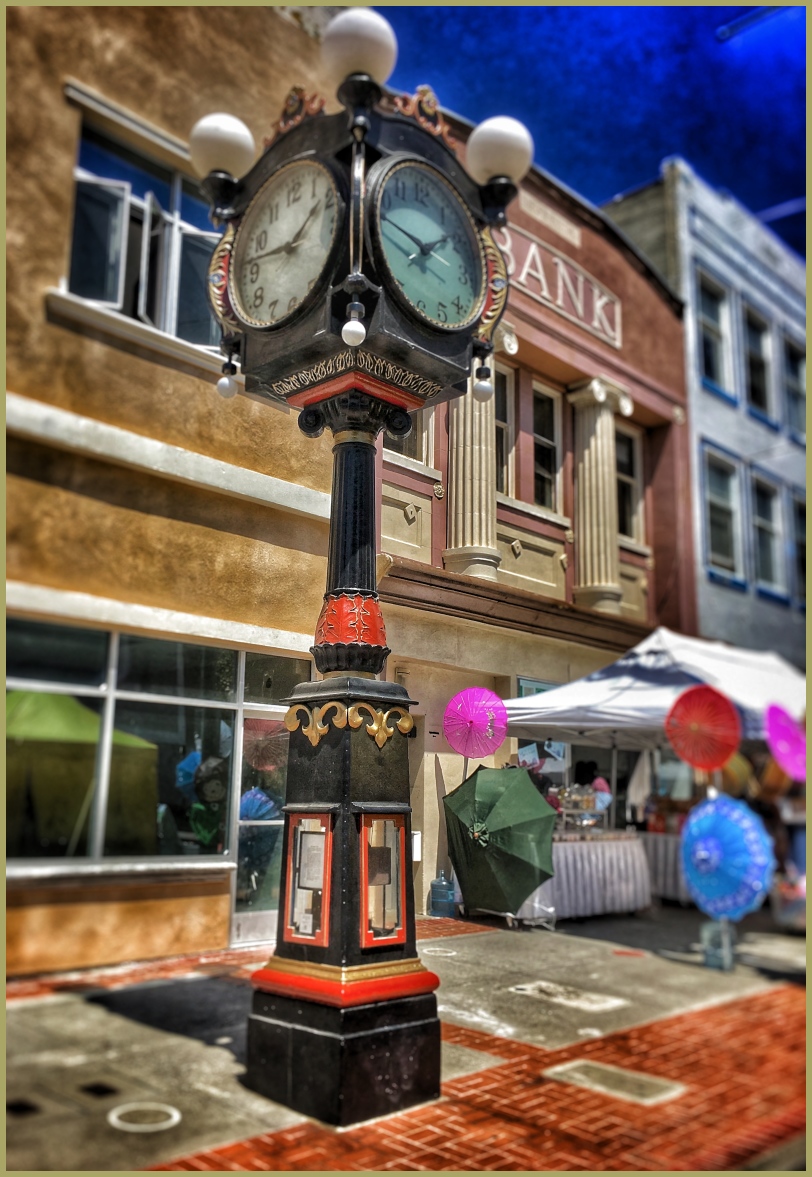 Walking through historic Vallejo, California, I spotted this old clock and was amazed by the story I read in the casing at the bottom of the clock - a bit lengthy but I thought you might enjoy....incidentally, this was a full-on middle of the day shot taken by yours truly and my iPhone....so I processed it in Snapseed App's "HDR Scape", (I employed several modes)....Snapseed makes a really nice batch of processors for mobile phone photo editing.

This clock was built by E. Howard of Boston, MA in 1914. It was originally located in front of Burnett Brothers Jewelry on Market Street, San Francisco.

The clock became nationally known after the "San Francisco Preparedness Day" Parade on July 22, 1916. During that parade, a bomb was detonated, killing ten bystanders....Labor radicals Tom Mooney and Warren Billings were accused of the crime, although a photograph of the clock and Mooney showed that he was nowhere near the bombing. Despite this alibi,(Consequently, the title "ALIBI CLOCK" became popular as time passed).

Mooney and Billings were convicted in a notorious trial that became a national "cause celebrate' (sic). It was later revealed that evidence was tampered-with, and that several prosecution witnesses had lied.
Years later, in 1939, Mooney was pardoned and Billings was pardoned in 1961.

In 1932, the clock was moved to Simons Jewelers, in Vallejo, CA at 316 Georgia Street. After being restored and overhauled, it was leased and cared for by Brown's Jewelers of Vallejo. The clock still stands on Georgia Street in historic Vallejo.

@RBL: Thank you Ruthie! Hope you guys are doing well ;-)

A beautiful shot of this fine old clock. It certainly has an interesting history.

@Steve Rice: thanks so much, Steve...yah, quite a history indeed. I feel sorry for those poor guys who spent time in jail for so long....

@Existence Artistique: Thank you very much ;-)

@Curly: Hi Curly - Thank you... Yes the clock is pretty cool to see, but truthfully, the processing pulls the environment into a nicer state ;-)

Interesting design and lots of fantastic colour all around.Great info as well Dennis.

@Darkelf Photography: Thankyou do much, Maciek! ;-)

Great capture of this beautiful vintage clock!! Thank you for the background information as well.