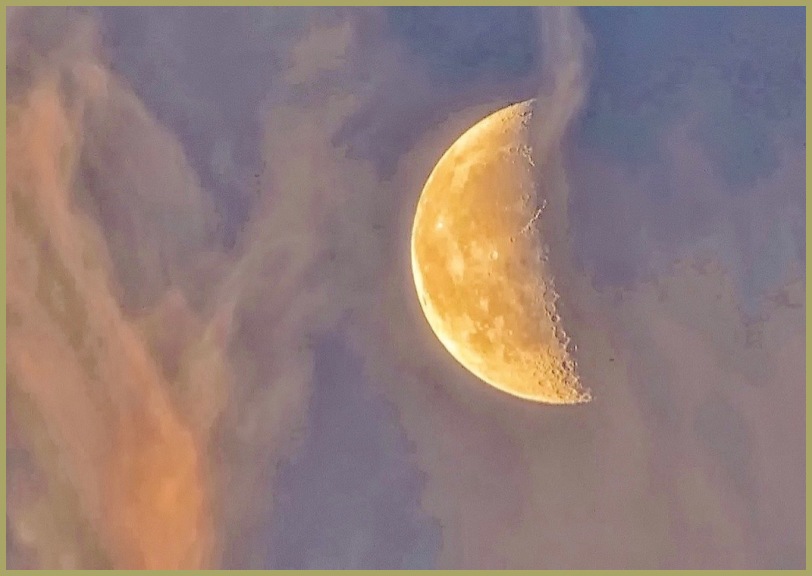 One of my favorite images is this one here...I shot this in Pennsylvania in early October, 2015 at the waxing Hunter's Moon....It appeared as though the Moon Men were having a Barbecue Cookout and the smoke was rising to space...Of course, the "smoke" was actually just a cloud that appeared visually above the moon, but it was still fun to pretend. I do that a lot! It keeps me young in spirit ;-)

What an amazing image . . the camera has certainly captured far more that we expect to see. And love your casual reference to the fascinating details !

: Helen : from is currently photographing in, Ethiopia

Wow! You are on fire this week Denny!

A masterful painting in the firmament ! Five stars to go along with your moon, Denny.

@Existence Artistique: Thank you so very much ;-)

It's a very successful picture of the moon. It's a natural for one's imagation to be encouraged.

@Francisco Romero: Thank you so much, Francisco ;-)

Superb shot. I love the half moon - it looks very mysterious and the swirling clouds add to the atmosphere beautifully.

@Darkelf Photography: Thank you very much, Maciek! I was lucky that this came out so well - lucky but happy ;-)

@Hiro: Thank you very much, Hiro!

@Martine Libouton: Thank you so much, Martine ;-)

Those moon men stay busy. They should open a restaurant. Spectacular image!

@Steve Rice: I hear the Master Chef's name is Flynn;-) Thank you sir!