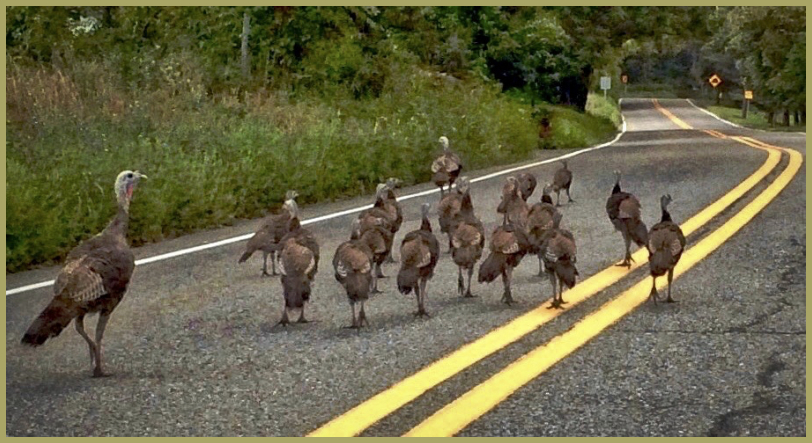 With a famous line from "Planes, Trains and Automobiles," (one of my favorite movies of all time)...I caught these characters one morning on my way to work when Barbara and I still lived in Eastern Pennsylvania....

Often times, I would take this back country route to the office and I was never dissatisfied...Always beautiful and relaxing...When I came up over a hill and down the other side to see these Turkeys, for some reason the first thing that came to my mind was the thought of John Candy and Steve Martin riding along the wrong side of the road in that famous and hilarious movie.

It seems like Turkeys are often the perfect characters for anything funny....We also have lots of Turkeys in our US Government these days... but that's another subject....sort of.... Just saying....

Perhaps just flown in from the keep-left UK ?!

@Ronnie 2¢: Precisely!! I noticed that as well ;-) Better to stay let than Right - especially when Right is Wrong! Cheers sir!

This can be a Wacky Wednesday shot, then... nice framing of these jive turkeys using the road as their own personal travel-way. I encountered a bunch of wild ones a few years ago and photographed them as well; will post that one of these days, but they weren't on the road like this! Great shot.

@Rick: Wacky Wednesday indeed ;-) I love your comment, sir...sorry to be so late with this reply...a weird and busy day today (Tuesday) ...I'll be Mo better tomorrow ;-) Cheers

Cute capture with a caption that says it all!!

Off to the turkey races! A very cool find with all these birds. I notice some older birds seem to be looking out for the smaller, younger birds.

@Steve Rice: Thank you Steve! A good observation regarding the older birds...very cool! Thank You ;-)

I agree about all the turkeys in the government! I have only a wild turkey once. I know that they are around here but they seem to be well hidden! A great image! Hope that they get off the road soon!

@Elaine Hancock: They never seemed to be alarmed by cars...I saw them several times when I used that road which was relatively rural...Thanks very much, Elaine! All the best

https://www.youtube.com/watch?v=0KaWSOlASWc
* Walking on the Wilde Side*
:-)

A cool photo! They are walking on the correct side of the road by my Aussie reckoning ;-) Just because you drive on the wrong side... Also, there are lots of turkeys in any government really.

@Darkelf Photography: I quite agree, sir....Now if I could just save enough Money to purchase that Morgan plus4 I have always wanted (Right-Hand Drive, British Racing Green) I would gleefully drive down the highways and byways of North America and everyone else be damned....especially the Turkeys!!! Thank you, sir ;-)

Thanks for the smile this morning.

@Rebecca: Your welcome, Rebecca...I hope all is well <3