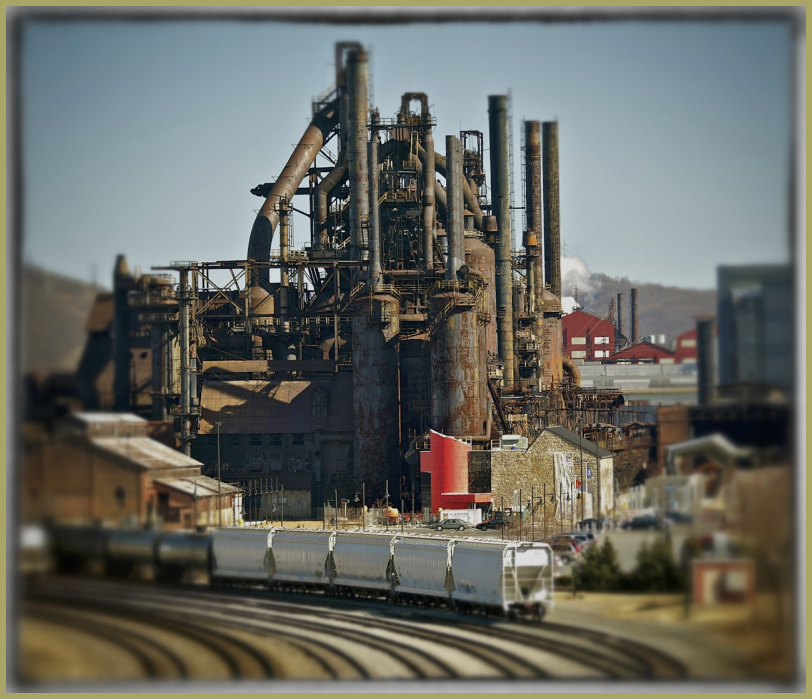 This is a "side" view (from the North) of The Old Bethlehem Steel Plant of Bethlehem, PA.

Bethlehem Steel (1857–2003) was once the second-largest steel producer in the United States, after the Pittsburgh-based U.S. Steel company.
For many years, trains delivered raw material in and carried out the finished products. Once loaded with steel, the trains rolled to projects in all corners of North America and around the world. Now, those trains just roll by, pulling auto carrier cars, grain hoppers, tank cars, flat cars, and box cars.

A general decline in the U.S. steel industry, and management problems lead to a 2001 bankruptcy at Bethlehem Steel. It was dissolved with remaining assets being sold to ISG (International Steel Group) in 2003. Then, In 2005, ISG merged with Mittal Steel thereby ending any remaining U.S. ownership of the assets of Bethlehem Steel.

Bethlehem Steel was one of the largest shipbuilding companies in the world and it was one of the most powerful symbols of American industrial strength for many years. The company was responsible for supplying the steel for numerous New York City and other city skyscrapers, as well as bridges (including the Golden Gate Bridge), dams, and countless other construction projects.

Bethlehem Steel's demise is often cited as one of the most prominent examples of the U.S. economy's shift away from industrial manufacturing, its inability to compete with cheap foreign labor, and practices of business management that valued short-term benefit over long-term strategy.

Now, the main plant that you see here, stands unused and quiet. The plant property to the south (just out of view to the right) is home to an arts and entertainment district called "SteelStacks." The plant's 5 blast furnaces, it is planned, shall remain standing. They serve as a rather unsettling backdrop for the new campus, which includes a contemporary performing arts center, called the "Arts Quest Center" and a "Sands Casino Resort" to the east of the site. The disturbing aspect, to me, is the fact that money is being gambled away in the casino, and spent on other forms of entertainment, while the lives and livlihoods of workers went by the wayside.

Environmental factors were, of course major, and there is no getting around the fact that pollution in the late 19th century, and 20th century right on into even the 1960's and 1970's, when environmental legislation finaly began to take hold. But for the lives and families of the general employees, it is hard not to feel badly about the loss of jobs for wage earners.

The steam you see beyond is coming from a plant that is still in operation and is, to the best of my knowledge, not associated with Bethlehem Steel,

@Martine Libouton: Thank you so much, Martine ;-)

A beautiful relic of our industrial past. I marvel at these old plants and all the activity that went on in and around them.

@Steve Rice: Indeed - This was an amazing plant.....probably 60% of the NYC Skyscrapers were built with steel from tis plant....Thank you so much, Steve....Sorry to be missing you...rather busy here at the kids (son, David and family) here in Vallejo ;-)

I have always wanted to visit there. A fabulous image. Great information.

@Elaine Hancock: It's quite a tour, I am told...I missed it but heard lots of stories ;-) Thanks, Elaine!

The intricate industrial detail is superb Dennis. This almost a "living" sculpture now. Interesting information about the plant's history as well.

@Darkelf Photography: Thank you so much, Maciek ;-)

A situation all too familiar to me, too . . consumption advances as production wanes and we all lose.

I know it well. Congratulations on your SPOTLIGHT!

@Ruthiebear: Yes , I am sure you did, my friend :-) Really amazing! Thanks so much for stopping by, Ruthibear ;-)

Congratulations on the Color Spotlight!

@Steve Rice: Thank you So much, Steve! A really nice surprise ;-)

Congratulations on the Spotlight Denny!

@Elaine Hancock: Thank you so much, Elaine ;-)

. .and Congratulations on the Spotlight, too ! Well done.

Superb composition and very interesting ! Congratulations on your Spotlight !

A great view which has a nice tilt-shift appeal to it!! Congratulations on the Spotlight as well!

I'm late to the Spotlight party, but hearty congratulations for this super cool tilt-shift beauty. I like the informative write-up as well.

This is a great shot! Congratulations!!

A sad but interesting story, there are similar ones all around the 'western' world.

Congratulations on the Color Spotlight.

I discovered this spotlight photo only now, due to my absence while skiing in the Dolomites. A powerful 'portrait' of an industrial ruin, only too common nowadays, and a great choice for the spot! Congratulations and respect!

Congrats on the Spotlight, wonderful image !~