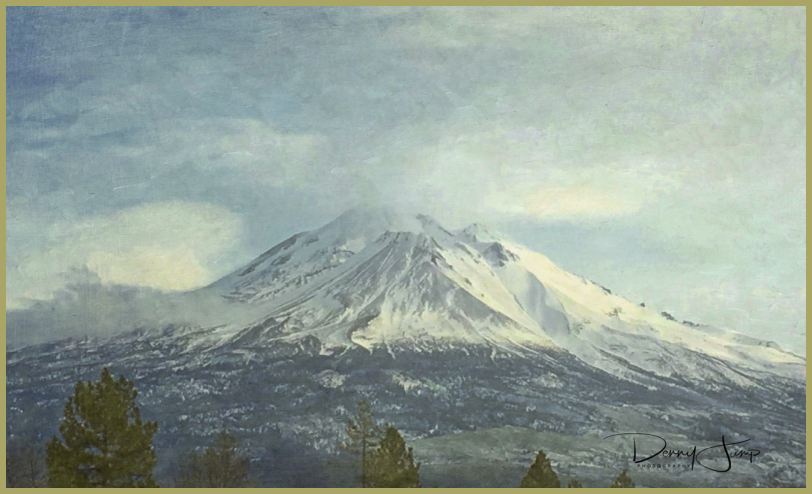 This is an image that I captured with my iPhone and later processed it through Topaz...and within that, I selected a "Painterly" mode.
I hope you like the effect here....

Mount Shasta sits in far Northern California and, when traveling southward (or northbound) it is normally visible from the major Highway designated as "Interstate 5."
Unfortunately, we had a schedule to maintain in order to get to our son's house in Vallejo, CA, (another 245.2 miles south 394.6 km). So, I stopped at a decent vantage point and shot this with my iPhone with the plans to edit it later as best as possible. I was actually relatively pleased how this painting effect came out...I hope you like it and I would LOVE to hear your critiques and comments.

At an elevation of 14,179 feet (4321.8 km(, Mount Shasta is a "Potentially Active" Volcano, part of the Cascade range that extends from British Columbia down to Northern California. The Cascades are a volcanic range with stll some active or "potentially active"craters.

Wow ! Like a Mount Fuji in Jump version ! I love the treatment, fits so well the soothing mood and meditation invitation, glorious !

@k@: Hi dear Pal!! Thank you so much! This angle of view seems quite reminiscent indeed! It is a very pretty volcano...Hopefully it will STAY simply a pretty volcano and NOT a exploding one ;-)

I like that a lot! painterly is as poetry to feeling.

@Joyce: I Love your words, Joyce! I quite agree....Thank you!

Great stuff, Denny. It is majestic !

@Rick: Thank so much, Rick! It really IS a handsome mountain from this angle (westerly) especially! I owe you a "visit"...will be there soon ;-)

This is gorgeous and does look very painterly. You should be happy with is result.

@Steven: Thank you so much, Steven!